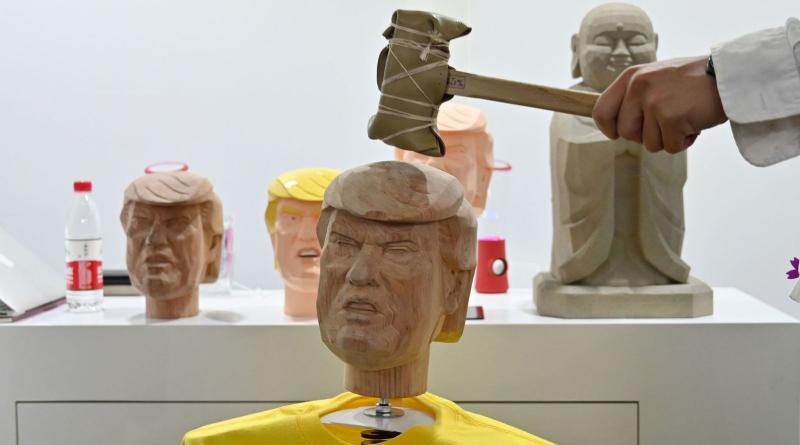 The controversial heads come after the US president angered many in China as he sparked a multibillion-dollar tariff war.

A tech fair attraction that allowed visitors to batter a bobble-head likeness of Donald Trump with a mallet has been axed by organisers.

The life-size head was set up by Japanese firm Soliton Systems at the Consumer Electronics Show Asia (CES Asia) in Shanghai as part of a "stress relief" station.

CES Asia tweeted: "Once we learned of this display, we acted immediately to stop that portion of the exhibit. We will not tolerate displays of violence directed at real people."

The US Consumer Technology Association, which organises the three-day event, said it warned the Japanese firm behind the effigy about its display on Tuesday.

By Thursday, a curtain was drawn across Soliton's stand and the Trump heads were gone.

The controversial heads come after the US president angered many in China as he sparked a lengthy multibillion-dollar tariff war with the Asian nation.

On Monday, Mr Trump said the US would impose tariffs on more Chinese imports if President Xi Jinping boycotted the looming G20 summit.

He threatened the escalation in an interview with US-based business channel CNBC, declaring that additional tariffs would come into effect immediately.

President Trump told the broadcaster he would tax the remaining Chinese goods currently not affected by the trade war if his Chinese counterpart did not meet him for talks - expected during the G20 meeting in Japan at the end of June.

Trump Lied To Prince Charles's Face—And To The World

Trump’s plan to save coal: anti-environment, monopolistic, and probably unconstitutional