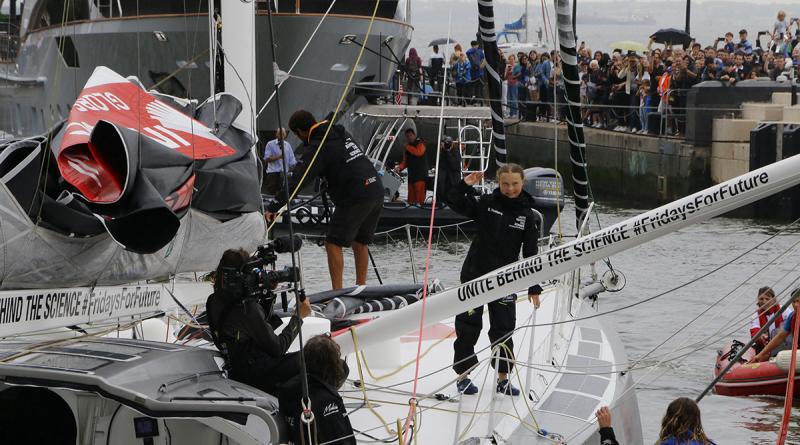 29 08 2019 | 07:45
Flotilla of 17 boats escorts climate activist arriving for United Nations
Climate Action Summit
New York, 28 August 2019 --Greta Thunberg, the 16-year-old Swedish climate activist and Nobel Peace Prize nominee, sailed into New York Harbor today, flanked by a fleet of 17 sailboats representing each of the Sustainable Development Goals on their sails. Thunberg is arriving to participate in the Youth Climate Summit and the Climate Action Summit at the United Nations Headquarters next month.

The flotilla met Thunberg at the Verrazano Narrows Bridge and accompanied her to North Cove Harbor in Manhattan to show appreciation and solidarity for her mission to mobilize support for action to achieve Sustainable Development Goal 13, “Climate Action,” as well as the other 16 goals for a better world by 2030, unanimously adopted by world leaders at the United Nations in 2015.

“Young people around the world are demanding urgent climate action by all leaders. They are leading the kind of transformative change needed to drastically reduce carbon emissions to protect our planet and ensure the wellbeing of people,” said Amina J. Mohammed, UN Deputy Secretary-General. “Time is running out. The United Nations is proud to host hundreds of young activists and leaders, including Greta, who are answering the Secretary-General’s call to bring solutions to the Youth Climate and the Climate Action Summits. Our individual and collective actions will transform our world, save lives and ensure a life of dignity for all.”

The Sustainable Development Goals are a call to action for governments, business and civil society to work together to build a better future for everyone – to end poverty, fight inequality and tackle the climate crisis. This September, world leaders will gather for a series of United Nations summits and high-level meetings to boost action on climate change and accelerate progress on sustainable development, aimed at securing healthy, peaceful and prosperous lives for all and kickstarting a decade of ambitious action to deliver the Sustainable Development Goals by 2030. The week will begin with the Youth Climate Summit on 21 September, followed by the UN Secretary-General’s Climate Action Summit on 23 September.

To join the UN climate summits and minimize her own carbon footprint, Thunberg embarked on a trans-Atlantic voyage on 14 August from Plymouth, England to New York City on a solar-powered, zero-emission racing boat, the Malizia II, promoting action to address the climate emergency and support the Sustainable Development Goals (SDGs).

The SDG flotilla was organized through the SDG Strategy Hub of the UN Office for Partnerships. It was led by Captain Nitzan Levy of Sailors NYC and Deputy Captain Barbara Marcoz, a United Nations employee and member of North Cove Sailing Club, and made possible by support from the Permanent Mission of Monaco to the United Nations, Project Everyone, the ClimateWorks Foundation, Laura Seydel, TBWA, and the United Nations Foundation. The 17 vessels of the flotilla were provided by local New York City sailing clubs including North Cove Sailing, Hudson River Community Sailing, Sailors NYC and New City Kids. Additional support was generously provided by the United States Coast Guard.
UN Department of Global Communications
28 AUGUST 2019

Greta Thunberg: "We want politicians to listen to the scientists".