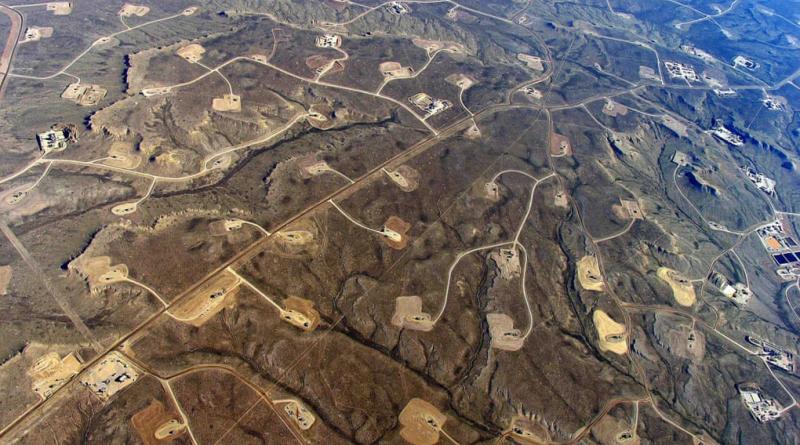 The world’s largest investment banks have provided more than $700bn of financing for the fossil fuel companies most aggressively expanding in new coal, oil and gas projects since the Paris climate change agreement, figures show.

The financing has been led by the Wall Street giant JPMorgan Chase, which has provided $75bn (£61bn) to companies expanding in sectors such as fracking and Arctic oil and gas exploration, according to the analysis.

The New York bank is one of 33 powerful financial institutions to have provided an estimated total of $1.9tn to the fossil fuel sector between 2016 and 2018.

The data shows the most aggressively expanding coal-mining operations, oil and gas companies, fracking firms and pipeline companies have received $713.3bn in loans, equity issuances and debt underwriting services from 2016 to mid-2019.

Other top financiers of fossil fuel companies include Citigroup, Bank of America and Wells Fargo.

The figures update the group’s Banking on Climate Change 2019 report from April, which showed the practices of key investment banks were aligned with a climate disaster.

Figures show fracking has been the focus of intense financing, with Wells Fargo, JPMorgan Chase and Bank of America providing about $80bn over three years, much of it linked to the Permian basin in Texas.

The financing of the tar sands crude oil projects in Alberta, Canada, is dominated by the Canadian banks, led by the Royal Bank of Canada and Toronto Dominion.

The tar sands fields in north-west Canada are the third-largest known reserves of crude oil in the world, but extraction has caused widespread damage to ecosystems and forced indigenous communities from their homes.

Although financing levels are on a smaller scale than other parts of the fossil fuel industry, in the years since the Paris climate agreement there has been increased financing for oil and gas projects in the Arctic, led by JPMorgan Chase, which provided $1.7bn in 2016-18.

Extraction in the region is typically dominated by Russian firms such as Gazprom and Rosneft, about which there is less transparency in business data.

The largest American banks – JPMorgan Chase, Citi and Bank of America – lead financing for ultra-deepwater oil and gas projects that extract fossil fuels from 1,500 metres and below.

Deepwater projects have been the site of several disasters, including the BPDeepwater Horizon spill in 2010, in which 11 people died and billions of dollars’ worth of damage was done to local communities and businesses. 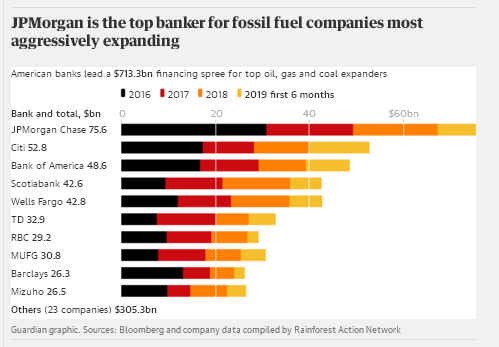 Barclays is one bank showing signs of change. While it remains a significant banker for the fossil fuel industry, its business with the companies most aggressively expanding in the sector has fallen sharply, from $13.1bn in 2016 to $5.2bn in 2018. The first-half figure for 2019 shows the bank is on track to record another annual decrease.

In response to the figures, JPMorgan, which has faced growing protests over its fossil fuel banking activities, said it recognised the complexity of climate change and actively engaged with stakeholders on the issue.

Wells Fargo said it carried out enhanced checks on its energy clients, which represented a small part of its overall business.

Several investment banks contacted by the Guardian said they were expanding quickly in renewable industries and had tightened lending policies on financing for Arctic oil and gas, coal and tar sands fossil fuel projects.

Elsa Palanza, Barclays’ global head of sustainability and citizenship, said: “We can all sit around pointing fingers at each other, but that doesn’t help solve what is a really complex and multifaceted problem. What can help solve the problem is, firstly, the voluntary mechanisms we are working on, like the Task Force on Climate-related Financial Disclosures, and then the new attention from regulators like the PRA [Prudential Regulation Authority].

“The new requirements make people working in banks think about climate change as a double-sided coin, to look at the risks within our portfolio, but also thinking about the opportunity side in terms of financing renewable energy. That’s leveraging the best of what a bank would offer.”

The big four state-owned Chinese banks, which have no fossil fuel financing policies, have dominated services for coalminers and coal power companies since 2016.

The figures come amid growing uncertainty about the long-term viability of the oil and gas industry amid fears of a climate “Minsky moment”, a sudden crash in fossil-fuel-related asset prices as investors and money managers rush for the door when climate risks materialise abruptly.

Ensuring a managed decline of the oil and gas industry while also financing the next wave of renewable energy products is deemed to be vital.