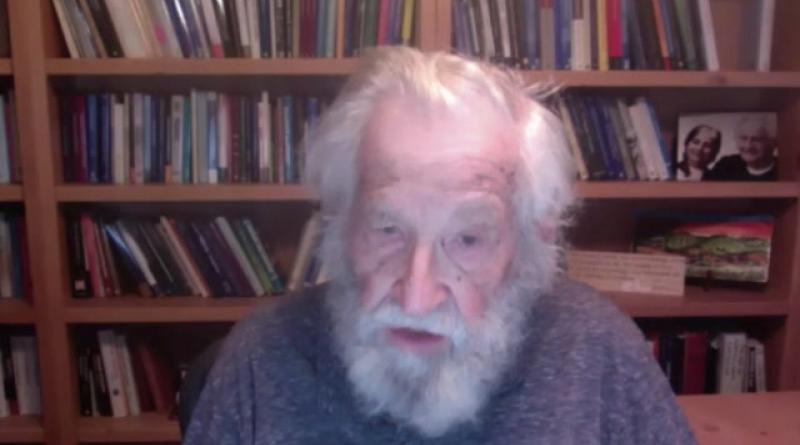 Noam Chomsky is not in the mood for holding back.

The celebrated linguist and media critic watches the world approaching a US election whose outcome he believes could send the planet hurtling further towards environmental catastrophe.

It is perhaps not surprising he has stark words about Donald Trump and the Republican Party, which he says is the world’s only large conservative political grouping to deny the existence of climate change.

In an interview with The Independent to promote a new book about the urgency of the crisis and a means to transition to a non-fossil fuel economy as part of a so-called global green new deal, he says he has identified several patterns over the course of the Trump presidency.

One is to tear up any deals in which he played no part in creating, such as the 2015 Paris Accord to try and limit the planet’s warming, which Barack Obama helped to broker, and from which Trump has withdrawn the United States.

Chomsky also makes a highly controversial comparison between Trump and Adolf Hitler – one that was strongly rebutted by experts on the Holocaust who told The Independent such a suggestion was wrong and offensive.

The public intellectual and activist, whose many celebrated works include Manufacturing Consent, is now aged 91. He is adamant the threat represented by the heating planet is unprecedented.

“The facts are pretty straight; there is almost universal consensus among serious scientists that we are racing towards the cataclysm, if current tendencies persist,” he says.

“By the end of this century, you might have reached the level three, maybe four degrees Celsius above pre-industrial levels. And every analysis concludes that's a total cataclysm. Organised human societies – nothing survives.”

He adds: “We are moving towards cataclysm. There is one country in the world, the United States, that wants to put its foot on the accelerator.”

Asked about the specific role played by the president, and the Republican Party, he says the global coronavirus pandemic, which has so far killed more than 1 million people and infected more than 43 million, can be tackled, but not with “malignant cancer in charge of the policies – someone who moves to destroy anything that doesn't improve his electoral chances”.

“Definitely the worst one I can think of in history, Adolf Hitler was pretty hideous – [but] he wasn't trying to destroy organised human society on earth,” he says.

Challenged on this, with the fact that the Nazi Holocaust killed at least 6 million Jewish people, Chomsky, whose parents were Jewish, says Hitler also killed “30 million Slavs, but not human civilisation”.

Chomsky, whose book with progressive economist Robert Pollin is entitled Climate Crisis and the Global Green New Deal, cites the Wannsee Conference, held in a Berlin suburb in January 1942 to lay out the Nazis’ plan for the extermination of the Jewish people – what they termed the final solution.

He contrasts that dark genocidal moment in history with a 2018 statement by the Republicans’ National Highway Safety Administration, which concluded no new restrictions were needed for vehicle emissions because it assessed global temperatures would rise by 4 per cent by the end of the century.

As such, the Trump administration concluded there was little point in enforcing new emissions standards, given they were one of several contributors to global warming. The report’s authors wrote that stopping the required rise in greenhouse gas emissions “would require the economy and the [US’s] vehicle fleet to substantially move away from the use of fossil fuels, which is not currently technologically feasible or economically practicable”.

“[They’re saying] so we're heading for cataclysm, let's go faster because that'll mean more profits for my constituency, the researchers who fund me,” says Chomsky. “Can you think of a document like that in history.”

He adds: “OK, so let's go back to the outrageous statement. Well, it’s outrageous. It’s not false.”

The president has repeatedly dismissed the climate crisis and spent much of his term overturning environmental standards imposed by Barack Obama. He also withdrew the US from the 2015 Paris Accord.

This autumn, as wildfires ravaged much of the US west with a scale and intensity not seen for a century, the president sought to blame bad forest management.

In September, Trump visited California and spoke with government officials. One of them, Wade Crowfoot, California’s secretary for natural resources, said to the president: “If we ignore the science and put our head in the sand and think it’s all about vegetation management, we’re not going to succeed together protecting Californians.” Mr Trump replied: “It’ll start getting cooler. You just watch.”

By contrast, a 2018 assessment by the Intergovernmental Panel on Climate Change (IPCC) warned policy makers of the necessity of seeking to limit warming to 1.5C to avoid even more catastrophe. One of its authors wrote: “Every extra bit of warming matters, especially since warming of 1.5C or higher increases the risk associated with long-lasting or irreversible changes, such as the loss of some ecosystems.”

Nevertheless, some will be likely be troubled by Chomsky’s terms of reference and the comparison of Trump to Hitler.

A spokesperson for the highly regarded United States Holocaust Memorial Museum in Washington DC, directed The Independent to a 2015 statement posted to its website it says remains relevant.

It says: “Nazism represented a singular evil that resulted in the murder of 6 million Jews and the persecution and deaths of millions of others for racial and political reasons.

“Comparing contemporary situations to Nazism is not only offensive to its victims, but it is also inaccurate and misrepresents both Holocaust history and the present.”

It adds: “The Holocaust should be remembered, studied, and understood so that we can learn its lessons; it should not be exploited for opportunistic purposes.”

Others were more directly critical. Deborah Lipstadt, a celebrated US historian specialising in the Holocaust, and whose court battle against Holocaust denier David Irving was featured in the 2015 movie Denial, says Chomsky’s comments were counterproductive.

“Look, I think climate change is a tremendous problem, [a] potential catastrophe for many parts of this world. We see it repeatedly. It's not a theory. It's not an unproven fact. I know of no serious scientist who denies it,” says Lipstadt, Professor of Modern Jewish History and Holocaust Studies at Atlanta’s Emory University.

She adds: “Could this be Chomsky once again saying the outrageous in order possibly to get attention?”

Aryeh Tuchman, associate director of the centre on extremism at the Anti-Defamation League (ADL) perhaps the nation’s leading organisation countering hate speech and antisemitism, said “Hitler’s wartime atrocities stemmed from his desire to eliminate Jews and establish Nazi supremacy over Europe, not from his desire to win re-election”.

He added: “This comparison between Adolf Hitler and Donald Trump is specious and offensive.”

There was no immediate response to Chomsky’s claims from the White House.

The plan envisaged by Pollin and Chomsky, which aims for a full employment economy, would start with an initial investment of $2.1 trillion in 2024 into wind, solar, geothermal and other low emissions energy sources. This is about 2.5 per cent of GDP. Around $500bn would go into building efficiencies, and the transfer of $100bn from the US military budget.

In their book, published by Verso, they write: “Total clean energy investment spending for the full 27-year cycle would amount to $140 trillion.”

Asked how they would pay for this, Pollin, 70, professor of economics at the University of Massachusetts Amherst said firstly, it would pay for itself from the savings its would create.

He added: “Number two, the US Energy Department. Even though they have banned the words climate change, they put out this document every year and this year’s says solar energy, onshore wind energy, geothermal energy, hydro power is already at cost parity or are cheaper than coal and nuclear power for generating electricity. So, over time it will pay for itself.”

The initial investment could come from a combination of private and public funds.

The debate over climate change and fossil has been, unusually, at the forefront of this year’s election campaign, in part because progressives such as Bernie Sanders and Alexandria Ocasio-Cortez have managed to push Joe Biden’s platform to the left.

His website reads: “Joe Biden knows there is no greater challenge facing our country and our world. That’s why he is outlining a bold plan – a clean energy revolution – to address this grave threat and lead the world in addressing the climate emergency.”

But because of the nature of US elections and the importance of certain key states such as Pennsylvania, he and Kamala Harris have in recent days been forced to insist they are not opposed to fracking – an environmentally damaging way to extract natural gas – in order to try and hold onto votes.

Chomsky recently caused some controversy when he essentially said 2020 was not a year for a protest vote and said Mr Biden, however imperfect from the perspective of a progressive, was the only viable option.

“Every couple of years something comes up called an election. You spend a few minutes deciding whether it’s worth taking some time off to participate,” he said.

“Sometimes it is so transparent that it shouldn’t take five seconds when you have a malignant cancer who is racing to destroy the world and the alternative is a programme that’s not great but at least open to improvement. A rational person doesn't spend five seconds on this decision.”

75 ways Trump made America dirtier and the planet warmer.