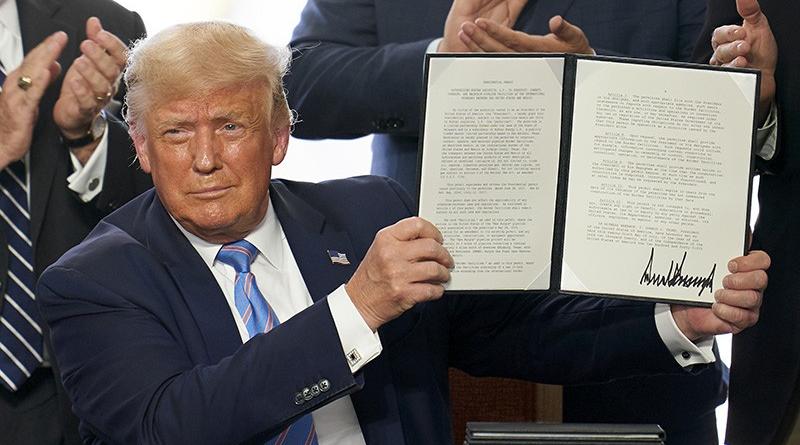 The directive could make it easier to fire some agency researchers and hire others for political reasons.

An executive order issued by US President Donald Trump has sown confusion and fear among government scientists in the country. Announced by the White House on 21 October, the order creates a job category for government workers — such as scientists — that makes it easier to fire people shifted into these positions. Researchers fear that this is yet another attack in a four-year war on science waged by the Trump administration.

“I've read it over a few times, and it’s pretty frightening,” says one senior scientist at the Environmental Protection Agency (EPA), who wished to remain anonymous to protect their job. The broadness of the order is of particular concern, the scientist says, noting that it appears to make it easier to “get rid of people who don’t toe the right political line”.

According to the order, workers to be tapped for the new category are those in “confidential, policy-determining, policy-making, or policy-advocating” roles. This could include scientists who help to craft policies on issues such as environmental regulation. It is not yet clear which workers would be placed in this category, but agency leaders have been given 90 days to create a preliminary list of positions that might be affected — due just one day before Trump would be inaugurated, if he was re-elected during the current US presidential race. If Trump loses to former vice-president Joe Biden, Biden could quickly overturn the order.

“What we’re looking at here is the president laying the groundwork for a pretty dramatic change,” says Lisa Manheim, who studies presidential powers at the University of Washington School of Law in Seattle.

Most government civil servants, including scientists, are hired from a competitive pool of applicants rather than being appointed because of their political affiliation, and they have significant job protections under US law. The new job category would not offer the same protections, and would enable the hiring of applicants who don’t have to compete against a pool of qualified candidates.

The Trump administration has described the executive order as a way to remove poorly performing employees from their jobs. But agency scientists question that motive.

“That’s a red herring, or an excuse by the administration to insert political hacks into the agency,” says a marine biologist at the National Oceanic and Atmospheric Administration (NOAA) who oversees scientists at a regional office and wishes to remain anonymous to protect their job.

Jacqueline Simon, director of public policy at the American Federation of Government Employees, a union representing 700,000 US government workers, says the order doesn’t state how many people will be affected, but she estimates that it could run into the hundreds of thousands of current federal employees, including scientists, lawyers, statisticians and technical experts who help to draft rules within US agencies. The US government employs about two million people.

To take effect, the order will need to clear legal challenges. The National Treasury Employees Union in Washington DC, which represents 150,000 employees at 33 agencies, has sued the government to dismiss the order, claiming that the White House has not justified the need for such a shift.

If put into action, the order would be most keenly felt by scientists involved in policymaking. When agencies draft policies, in-house experts discuss and challenge the proposed rules to ensure that decisions are evidence-based, says Tim Whitehouse, executive director of Public Employees for Environmental Responsibility, an organization that provides legal support to government whistle-blowers, in Silver Spring, Maryland. Under the order, says Whitehouse, scientists might not participate freely in crafting policies out of fear of losing their jobs.

Simon expects the hardest-hit science agencies to include NOAA, which monitors the climate, manages fisheries, tracks storms and issues weather forecasts; the EPA, which regulates air and water pollution from power plants and factories; and the Bureau of Land Management, which regulates land use by the oil and gas industry. “If Donald Trump wants to leave the executive branch in a state of chaos, this is a brilliant way to do it,” she says.

The White House and the EPA did not respond to Nature’s requests for comment. A spokesperson for the Department of Commerce, in which NOAA is embedded, said the agency would comply with the executive order’s request within the provided deadline.

Applied the “wrong way”, the order could be “a devastating blow to the independence of science throughout the federal government”, says Thomas Burke, an environmental-health scientist at the Johns Hopkins Bloomberg School of Public Health in Baltimore, Maryland, who served as a science adviser at the EPA under former president Barack Obama’s administration.

What are Trump’s plans to fight climate change?

Trump is in an alternate universe’: Environmentalists react to president’s climate change remarks at debate