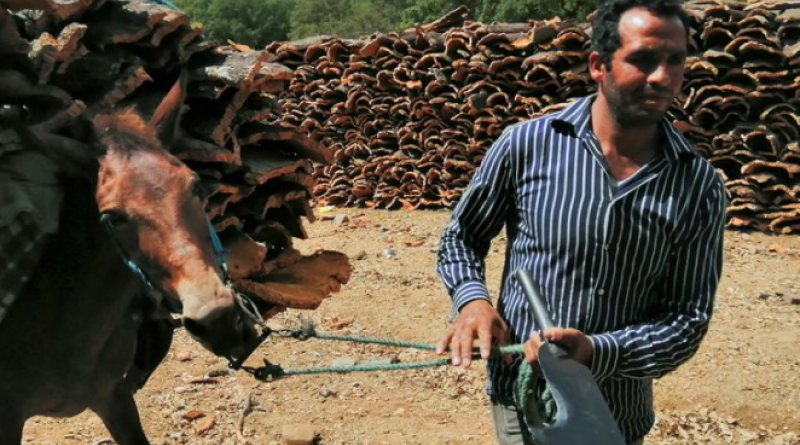 JENDOUBA, Tunisia, Sept 14 (Reuters) - For cork collector Khaled Warhani, the wildfires that devastated part of northern Tunisia's lush woodland this summer were a warning of how the changing climate will hurt his livelihood.

Though the fires were far worse in neighbouring Algeria, the blaze that raged through the forested hills around Ain Draham burned 1,000 hectares (2,470 acres) of woodland, including many of the cork oak trees that local people harvest each autumn.

"When the forest burns, we have nowhere else to work and will have nothing to eat," said Warhani, who had laden his donkey with thick, springy cork bark to be weighed.

Ain Draham, in the northwestern Jendouba province, is an area of cool hills that grow close with cork oak, pine and beech, a favourite summer destination for sweltering Tunisians and the centre of the country's cork industry.

Even before this year's blaze, the amount of cork harvested in the area had fallen by about a third in 10 years as the changing climate brought drought, the Forestry Agency head in the region, Mahmoud Geusmi, said.

This year, however, after an intense heatwave that brought highs of almost 50 Celsius (122F) to the capital Tunis, the fires were worse than ever before.

"They were more powerful and spread more rapidly. In a very short time they devoured hundreds of hectares," said Geusmi of the fires.

On the winding hill road up towards Ain Draham, stretches of previously unbroken green have been replaced by a skeleton forest of blackened trunks, bare of leaves, that carve sinister shapes against the skyline.

For the region's rural poor, harvesting cork brought an annual autumn income that, though small, many have come to rely upon. The harvesting season runs from June to November and a worker averages about 18 dinars ($6.50) a day.

Deep in a forest glade, where moss clung to the knobbly trunks of cork oak trees, Mouhamed Rebhi was using an axe to cut into the bark and lever off long pieces to sell.

The bark is cut only from the lower portion of the tree, below shoulder height, leaving a bare red trunk underneath while older bark grows above.

Tunisia's cork harvest is tightly regulated by the government, which processes and exports about 90% of the produce. A worker's haul is weighed in the forest and stacked for transport to processing facilities in a long pile in a woodland clearing.

"This is the only product that pays our living expenses. There's no other work in this area," Rebhi said.

Wildfire burn scars can intensify and even trigger thunderstorms, leading to catastrophic flooding – here’s how

Wildfires in Algeria: dozens of civilians and soldiers reported dead