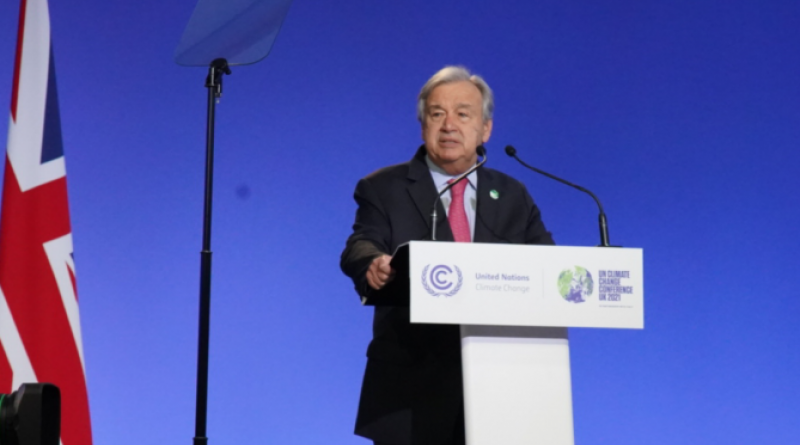 Dear Prime Minister Boris Johnson, I want to thank you and COP President Alok Sharma for your hospitality, leadership, and tireless efforts in the preparation of this COP.

The six years since the Paris Climate Agreement have been the six hottest years on record.

Our addiction to fossil fuels is pushing humanity to the brink.

We face a stark choice:  Either we stop it — or it stops us.

Enough of killing ourselves with carbon.

Enough of burning and drilling and mining our way deeper.

We are digging our own graves.

Our planet is changing before our eyes — from the ocean depths to mountain tops; from melting glaciers to relentless extreme weather events.

Sea-level rise is double the rate it was 30 years ago.

Oceans are hotter than ever — and getting warmer faster.

Parts of the Amazon Rainforest now emit more carbon than they absorb.

Recent climate action announcements might give the impression that we are on track to turn things around.

This is an illusion.

The last published report on Nationally Determined Contributions showed that they would still condemn the world to a calamitous 2.7 degree increase.

And even if the recent pledges were clear and credible — and there are serious questions about some of them — we are still careening towards climate catastrophe.

Even in the best-case scenario, temperatures will rise well above two degrees.

So, as we open this much anticipated climate conference, we are still heading for climate disaster.

Every country sees it.

Small Island Developing States — and other vulnerable ones — live it.

For them, failure is not an option.

Failure is a death sentence.

We face a moment of truth.

We are fast approaching tipping points that will trigger escalating feedback loops of global heating.

But investing in the net zero, climate resilient economy will create feedback loops of its own — virtuous circles of sustainable growth, jobs and opportunity.

We have progress to build upon.

A number of countries have made credible commitments to net-zero emissions by mid-century.

Many have pulled the plug on international financing of coal.

Over 700 cities are leading the way to carbon neutrality.

The private sector is waking up.

The Net-Zero Asset Owners Alliance — the gold standard for credible commitments and transparent targets — is managing $10 trillion in assets and catalyzing change across industries.

The climate action army — led by young people — is unstoppable.

They are larger.  They are louder.
And, I assure you, they are not going away.

I stand with them.

The science is clear.  We know what to do.

First, we must keep the goal of 1.5 degrees Celsius alive.

This requires greater ambition on mitigation and immediate concrete action to reduce global emissions by 45 per cent by 2030.

G20 countries have a particular responsibility as they represent around 80 per cent of emissions.

According to the principle of common but differentiated responsibilities in light of national circumstances, developed countries must lead the effort.

But emerging economies, too, must go the extra mile, as their contribution is essential for the effective reduction of emissions.

We need maximum ambition – from all countries on all fronts – to make Glasgow a success.

I urge developed countries and emerging economies to build coalitions to create the financial and technological conditions to accelerate the decarbonization of the economy as well as the phase out of coal. These coalitions are meant to support the large emitters that face more difficulties in the transition from grey to green for them to be able to do it.

Let’s have no illusions: if commitments fall short by the end of this COP, countries must revisit their national climate plans and policies.

Not every five years.  Every year. Every moment.

Until keeping to 1.5 degrees is assured.

Until subsidies to fossil fuels end.

Until there is a price on carbon.

And until coal is phased out.

But we also need greater clarity.

There is a deficit of credibility and a surplus of confusion over emissions reductions and net zero targets, with different meanings and different metrics.

That is why – beyond the mechanisms already established in the Paris Agreement – I am announcing today that I will establish a Group of Experts to propose clear standards to measure and analyze net zero commitments from non-state actors.

Second, we must do more to protect vulnerable communities from the clear and present dangers of climate change.

That devastation will only grow.

All donors must allocate half their climate finance to adaptation.

And public and multilateral development banks should start as soon as possible.

Third, this COP must be a moment of solidarity.

This is critical to restoring trust and credibility.

I welcome the efforts led by Canada and Germany to help get us there.

It is an important first step — but it delays the largest support for years, and it doesn't give clear guarantees.

And multilateral development banks must work much more seriously at mobilizing greater investment through blended and private finance.

The sirens are sounding.

Our planet is talking to us and telling us something.

And so are people everywhere.

Climate action tops the list of people’s concerns, across countries, age and gender.

On behalf of this and future generations, I urge you:

Choose to safeguard our future and save humanity.

And I thank you.