'Unprecedented' globally: more than 20% of Australia's forests burnt in bushfires. 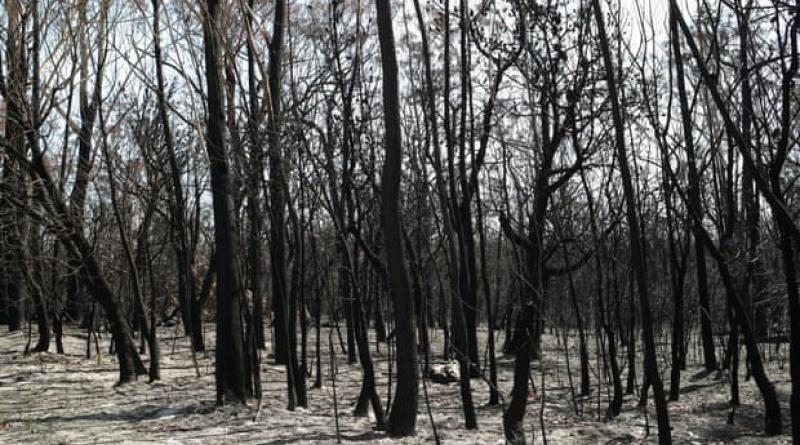 More than 20% of Australia’s forests burned during the summer’s bushfire catastrophe, a proportion scientists believe is unprecedented globally, according to new research.

Research published in a special edition of Nature Climate Change focused on the bushfire crisis finds that 21% of the total area covered by Australian forests – excluding Tasmania - has burnt so far in the 2019-20 bushfire season.

The analysis examined the area of forest burnt on each continent as a proportion of total forest cover in every fire season for the past 20 years.

The 21% figure contrasts dramatically with the proportion of forest burnt in any season on any other continent in that timeframe, which for most continents and forest types was 4-5%.

The one exception was for tropical and subtropical dry broadleaf forests in Asia and Africa, for which the analysis found medians of 8–9% had been recorded in that 20-year period.

The paper adds that the 21% is likely to be an underestimate because the data has not included fires in Tasmania and Australia’s fire season is still going.

“The data point for this year’s fires show it stands out completely from all other years for Australia or other countries,” the study’s lead author, Matthias Boer, said. “There is just nothing like it out there and we felt confident to call it unprecedented.

“The word unprecedented has been used a lot the last two months. [Our analysis] is the first in the peer-reviewed literature that puts some data behind that.”

The Nature Climate Change edition features analysis and commentary from some of the world’s most respected scientists.

In another paper, scientists Benjamin Sanderson and Rosie Fisher examine some of the factors that have influenced the current fire season and what gaps in knowledge could be addressed to better prepare society for more potentially extreme events in future.

The paper says that in the case of recent events in Australia, “there is no doubt that the record temperatures of the past year would not be possible without anthropogenic influence”. It adds that “under a scenario where emissions continue to grow, such a year would be average by 2040 and exceptionally cool by 2060”.

Andrew King, a lecturer in climate science at the University of Melbourne, co-authored another piece examining the role of climate variability and drought. He said the consequences of extreme drought, heat and bushfires had been well-documented, but the collection of articles in Nature Climate Change was intended to “provide informed commentary on this summer’s severe weather”.

There was a lot “we don’t fully understand yet”, King said. “While we can say with confidence that human-caused climate change has amplified the extreme heatwaves that have been observed this summer, the influence of human-caused climate change on drought and fires in Australia is much harder to disentangle and natural climate variability plays a very large role in both.”

He said the climate models used to make projections had “deficiencies in simulating both drought and fire such that we cannot yet provide robust guidance on how these extremes of Australian climate will change as the world continues to warm”.

James Collett, a lecturer in psychology at the School of Health and Biomedical Sciences at RMIT University, said the fact the journal had published an issue framed around Australia’s disastrous bushfire season “shows just how important an impact the bushfires are having on the global consciousness”.

“Australia is now a striking example that is driving international climate change discourse,” he said. “We can only hope that the psychological impact of the bushfires contributes to the political, economic, industrial, scientific and social changes necessary to manage climate change and create a sustainable world.”