U.S.: Another nail in the San Juan zombie carbon-capture coffin. 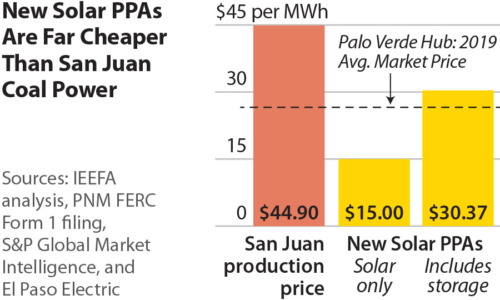 One project will add 100 megawatts of solar for $15 per megawatt-hour. The other will add 100 MW of solar and 50 MW of dispatchable storage for about $30 per MWh, including a monthly capacity charge for the storage component of the project. Although neither project is designed to directly serve customers of Public Service Company of New Mexico (PNM), their approval is bad news for the proponents of retrofitting the San Juan Generating Station to capture the carbon dioxide the plant produces. Both of the latest deals are the most recent examples of the long-term decline of solar PPA prices in the Southwest, and they are harbingers of further declines to come.

San Juan, which has been an important piece of the Farmington-area economy, simply can’t compete with such prices as the plant’s cost of producing electricity averaged $44.90 per MWh in 2018 and 2019, triple the price of the just-approved solar PPA for El Paso Electric and slightly less than 50% higher than the price of the new solar+storage PPA.

This is not the first nail in the coffin for Enchant’s proposed retrofit. In April, New Mexico regulators approved PNM’s proposal to retire the plant in mid-2022. In addition, this spring’s oil price crash undercuts Enchant’s plan to sell the CO2 captured at San Juan for use in enhanced oil recovery (EOR) activities in the Permian Basin. Given the serious financial problems facing Occidental Petroleum and Denbury Resources, two major EOR backers, Enchant’s plan seems increasingly unlikely, if not outright dead.

But Enchant executives stubbornly press ahead, lately talking up the prospect of permanently sequestering the CO2 from San Juan instead of using it for EOR, an option that would produce larger federal 45Q tax credits but which might not be ready until late in this decade and—if and when ready—might be limited to only 2 million metric ton of CO2 per year, not the 6 million metric tons that Enchant needs to sell to make its project financially viable.

Enchant also has started talking more about the revenues that could be produced by selling power from San Juan into the wholesale markets. However, this too would clearly be another money-losing proposition, because with an average production cost of $44.90 per MWh (or higher), power from San Juan would not be competitive with the price of power at the Palo Verde trading hub, which averaged just $26.58 per MWh in 2019.

Further, average annual energy market prices are expected to remain at about the same low level through the remainder of this decade due to low natural gas prices and the increasing competition from renewable solar and wind resources.

Who’s going to pay $44.90 (or more) for power from San Juan when it is and will continue to remain available elsewhere for much less either through a solar PPA or from the wholesale market at Palo Verde? The answer is, no one.

Enchant’s San Juan proposal is like a zombie from a 1950s-era B movie—not really alive, but still twitching around. Death looms, sooner or later.

Sooner would minimize the pain for the city of Farmington, the surrounding community, San Juan plant workers and potential investors. Instead of trying to sustain the zombie, the city, the state of New Mexico, PNM, the other current owners of San Juan, and the federal government can and should work together to deploy resources for a just transition away from coal through local reinvestment that is needed and truly deserved.

Transitioning the World to 100% Renewable Energy.

EU Climate Law: Europe must chart a path to a 100% renewables future.