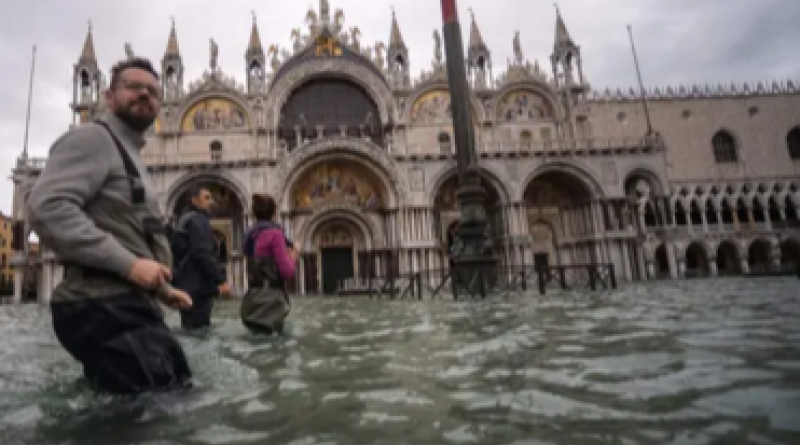 Veneto’s regional council rejected a plan to combat climate change minutes before its offices on the Grand Canal, in Venice, were flooded, it has emerged as the city continues to battle high water levels.

Venice has been hit by recurrent flooding since Tuesday, with 70% of the lagoon city engulfed on Friday morning as the acqua alta, or high water, level reached 1.54 metres amid heavy downpours.

On Tuesday night, as Veneto councillors were debating the climate emergency in Ferro Fini Palace, Venice experienced its worst flooding since 1966.

Politicians from the regional council’s majority rightwing parties: the League, Brothers of Italy and Forza Italia, rejected amendments to fight the climate crisis in the 2020 budget that were proposed by the centre-left Democratic party.

Sharing pictures of the room as water entered, Andrea Zanoni, the Democratic party’s deputy chairman of the council’s environment committee, wrote on Facebook: “Ironically, the chamber was flooded two minutes after the majority parties rejected our proposals to tackle climate change.”

“There is no more meaningful image than a chamber being flooded, causing the representatives of the Venetian people to flee, to illustrate all the inconsistency and political nullity of a current miserable administrative led by the League, Brothers of Italy and Forza Italia,” he added.

Zanoni took particular aim at Luca Zaia, the Veneto president and League politician, for presenting a budget that contained “no concrete plan to tackle climate change”.

Zaia has described the Venice flooding, which has killed two people, as “an apocalyptic disaster”. “Venice has been tortured, but there are also other parts of the Veneto region besides Venice,” he said on Wednesday.

In a statement to CNN, Roberto Ciambetti, the council’s president and League member, rebuffed the criticism.

“Beyond propaganda and deceptive reading, we are voting [for] a regional budget that spent €965m over the past three years in the fight against air pollution, smog, which is a determining factor in climate change,” he said.

Venice’s mayor, Luigi Brugnaro, blamed the floods on the climate crisis and promised that the long-delayed Mose flood barrier project would be finished.

Brugnaro closed St Mark’s Square as the tide started to rise again on Friday morning, engulfing shops, restaurants and homes. “I’m forced to close the square to avoid health risks for citizens … a disaster,” he said.

“We’ve destroyed Venice, we’re talking about €1bn in damage and that’s just from the other day, not today.”

The Italian prime minister, Giuseppe Conte, declared a state of emergency on Thursday night, paving the way for the government to assist people whose businesses and homes had been damaged. Conte said the flooding was “a blow to the heart of our country”.

Residents whose homes have been flooded will receive €5,000 immediately while restaurant and shop owners will get up to €20,000.

Brugnaro said a bank account would be opened to allow people from around the world to contribute towards repairing the city.

Water engulfed St Mark’s Basilica, flooding the crypt and smashing windows. It is unclear how much repairs will cost, but when water filled the 1,000-year-old cathedral in November 2018 the repair costs were estimated at €2.2m. The opera house, the Teatro La Fenice, was also damaged and a short circuit caused a fire at Ca’ Pesaro gallery. On the island of Murano, the mosaic floors of the cathedral were seriously damaged.