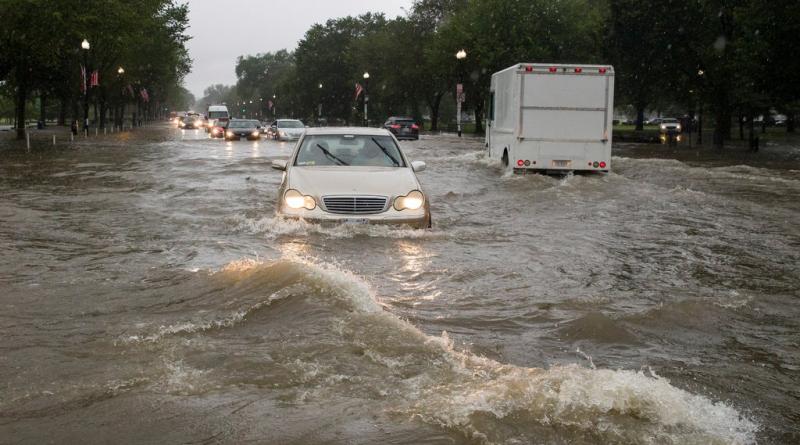 WASHINGTON — When almost a month’s worth of rain deluged this city on Monday morning, turning streets into rivers and basements into wading pools, it showed just how vulnerable cities with aging water systems can be in the era of climate change.

The rainfall overwhelmed the capital’s storm-water system, much of it built almost a century ago to handle a smaller population, far less pavement and not nearly as much water.

“We’re still approaching this 21st-century problem with 20th-century infrastructure, and it’s completely inadequate,” said Constantine Samaras, a professor of civil and environmental engineering at Carnegie Mellon University. “And it’s only going to get worse.”

Updating that infrastructure will be enormously expensive, experts warn, not just in Washington but around the country. That’s not only because upgrades are required. In many cases, cities are facing huge backlogs in general maintenance.

According to an analysis in May by the Water Environment Federation, a nonprofit group that represents waste-water professionals, municipal storm-water agencies throughout the country are facing an annual shortfall of $7.5 billion in funding required to meet their obligations under local, state and federal law.

Monday’s storm pushed six to twelve inches of sewage into the basement of Stephanie Bedenbaugh’s home in northwest Washington, where it ended up in an office, bathroom and laundry room and ruined antiques. Ms. Bedenbaugh, who has lived in the house since 2004, said she had experienced minor flooding before, but this damage was by far the worst she had seen.

Though the storm that hit the capital on Monday can’t be directly attributed to climate change without further analysis, it fits a general pattern. Warm air can hold more moisture, resulting in heavier rainstorms.

A spokesman for D.C. Water, Washington’s utility, said dealing with the costs of an aging infrastructure while also trying to prepare for more rainstorms like the one that hit Monday was no small task.

“Our average water main is 79 years old,” said Vincent Morris, the spokesman. “Just trying to keep those open, and trying to account for changes in rainfall patterns and new growth and everything else, is obviously a huge challenge.”

A core part of that challenge is funding. Mr. Morris said D.C. Water expected to spend $60 million over 10 years to improve storm-water pumping stations alone, as well as much higher costs for other climate-related projects. He noted that those costs would come “on top of what we’re spending just routinely to maintain older infrastructure.” And the city needs to find that money with a rate base of just 130,000 customers.

To keep up, the utility has already added a storm-water surcharge to customers’ bills, which Mr. Morris said average $108 a month. And raising those rates much higher risks straining the budgets of many city residents.

“We obviously have some customers who can pay that and may not even think twice,” he said. “But we have a great number of other customers who are on fixed incomes, or on limited incomes. And if their water bill is rising faster than their pay or their benefits, then it poses a huge challenge.”

Around the country, regulators and elected officials have been reluctant to grant rate increases to pay for climate-related upgrades, according to Shalini Vajjhala, founder of Re:FocusPartners, a design firm that works with local governments to help address the challenges of global warming. And the reason, she said, is often legitimate concern about affordability.

“Meeting current needs is hard, so focusing on future climate impacts is often completely out of reach,” Ms. Vajjhala said. “It’s like looking at someone in a leaky rowboat and talking to them about new fuel-efficient engines.”

[New Orleans is being pounded by rain and bracing for flooding from a tropical storm that is expected to form in the Gulf of Mexico.]

Erik D. Olson, who runs the water and health program at the Natural Resources Defense Council, said there was a psychological element to the problem, too. Cities have struggled to pay for upgrading their water systems because residents can’t see it, he said.

“Out of sight, out of mind,” Mr. Olson said. “People have not had to think about this for generations.”

Still, Mr. Olson added, the history of America’s water infrastructure offers reason for optimism. In the 1800s, motivated by the desire to control outbreaks of diseases like cholera and typhoid, cities and their residents were willing to pay for extensive new sewer and drinking-water systems.

The lesson, he said, is that the American public may eventually be willing to fund the sort of infrastructure upgrades that would enable cities to cope with the effects of climate change. But first, things probably will get worse.

“When people see it as a necessity,” Mr. Olson said, “they will be willing to pay for it.”

Christopher Flavelle covers climate adaptation, focusing on how people, governments and businesses respond to the effects of global warming. @cflav