"We Can Learn a Lot from Indigenous Peoples" 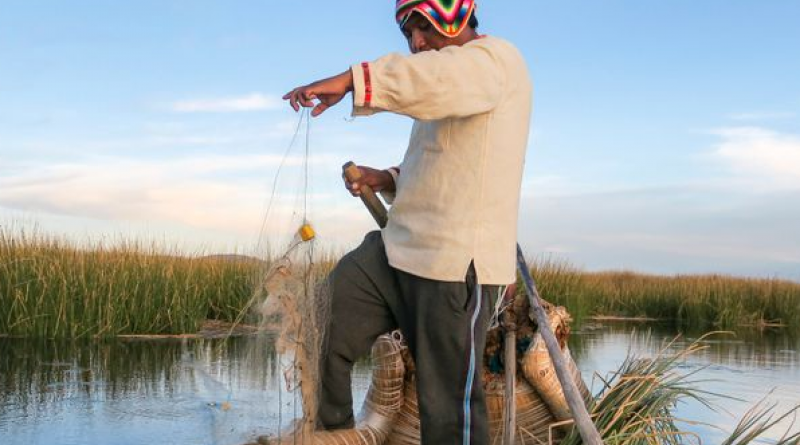 The way we eat is destroying the world, says agricultural economist Yon Fernández de Larrinoa. His research focuses on the food systems of indigenous peoples, and believes they can teach us valuable lessons.

It wasn’t just heads of government and United Nations officials who gathered at the global climate conference COP26 in Glasgow. A number of representatives of indigenous communities also attended. Their homelands continue to be destroyed, primarily by commercial agriculture and livestock farming, which is responsible for 90 percent of all clearcutting. The food industry is also responsible for a third of all greenhouse gas emissions.

Our global food system is destructive and unsustainable, says agricultural economist Yon Fernández de Larrinoa, the leader of the Indigenous Peoples Team at the UN Food and Agriculture Organization (FAO). He is convinced that we must learn from the people his team focuses on.

DER SPIEGEL: Mr. Fernández de Larrinoa, the food industry is a catalyst for climate change. How can that be changed when we have to feed an ever-growing global population?

Fernández de Larrinoa: The global food system, in its current form, is not sustainable. Scientists increasingly agree on this, while politicians and governments are more and more aware of the impact of the industrial food system. Everybody is looking for alternatives. And this is where the indigenous peoples’ food systems come into play. They are the oldest in the world, and they are sustainable, meaning, they function without destroying the natural resource base or overwhelming ecosystems in ways that they cannot regenerate themselves. The Aborigines in Australia probably have the oldest still existing food system in the world. For thousands of years, they have been generating food while at the same time – like other indigenous peoples – preserving the biodiversity in their territories.

DER SPIEGEL: What makes the food systems of indigenous peoples so special?

Fernández de Larrinoa: In the research we have undertaken with them, from the Arctic to the Amazon, and from the Himalaya to sub-Saharan Africa, the evidence gathered proves that they are not only sustainable, but also more resilient to alterations from climate change. Indigenous peoples don’t see themselves just as farmers, this is one of the first things they told us. They cultivate, but they are also hunters, fishers and gatherers. They possess valuable ancestral knowledge, handed down from generation to generation, on how to feed people without overwhelming nature. Their food systems are based in their cosmogony and the spiritual belief that life is everywhere and must be respected. If they hunt an animal, often a ceremony takes place. They are aware that they have taken a life. But trees and plants are also seen as living creatures worthy of respect. It is a completely different entry point regarding the ecosystem in which they live. This impacts their behavior and relations towards ecosystems, biodiversity and natural resources.

DER SPIEGEL: What exactly do they do differently?

Fernández de Larrinoa: They eat, fish, meat and plants, as well. But in their systems, for example, often it is not allowed to accumulate food. Food cannot be stored in large amounts, but must be distributed within the community, so everyone has enough to eat and, at the same time, the capacities of nature are not exceeded. Indigenous peoples understand the difference between food generation and food production. The latter system requires human input, like farming and livestock production. During the confinement period in the pandemic, these production systems suffered from the restricted movements that impaired the human maintenance of intensive farms, aquaculture and livestock activities. At the same time, food generation schemes – like fisheries, hunting or gathering – benefited from reduced anthropocentric intervention. It allowed their populations and stocks to grow. Commercial food systems treat both food generation and food production with the same approach, and this is one of the reasons for overfishing for example. Fish are being taken out of the sea, and those without commercial value are then thrown back. In an indigenous peoples' food system, this would never happen.

DER SPIEGEL: There is no food waste?

Fernández de Larrinoa: Exactly. Their food systems rely on the principles of reciprocity, circularity and seasonality. The concept of garbage is relatively recent in indigenous communities, with the arrival of plastic or batteries from outside. Traditionally, organic byproducts were converted into containers, tools or compost. Today, inorganic waste and garbage are becoming a big problem in indigenous peoples’ communities, since it is relatively new to them and they do not have the tradition of dealing with it. At the same time, though, some companies are copying indigenous peoples’ approaches and now bags are produced not from plastic, but from potato starch or maize.

DER SPIEGEL: You are describing systems that have to feed relatively small groups of people, and which rely primarily on what nature provides. City dwellers, though, cannot go hunting, gathering or fishing. To what degree can indigenous approaches be applied to the realities of larger, urban populations?

Fernández de Larrinoa: Life in the city changes the way we eat. In fact, it worries me how we urban dwellers are feeding ourselves – it impacts the whole planet. Naturally, indigenous systems can’t be directly transferred to urban spaces. But there is a lot we can learn from them. Indigenous peoples know about the importance of seasonality. They live according to the calendar of nature, and it is good for their health and good for ecosystems. Urban dwellers could learn to follow seasonality during the production and consumption stage and to consume products that are native to their territories. Reciprocity is another principle of indigenous peoples that urban dwellers could learn. Food is sacred and it should never be wasted. People should learn to buy just what they need and, if there is extra food during the production or the consumption stage, it should be shared before being wasted. The food base of indigenous peoples is also extremely broad and diverse in terms of the number of different edibles they consume. The Khasi people in the Himalayans, for example, generate more than 200 different foods through shifting cultivation in their forests. The majority of our commercial food items nowadays is based on three to four important crops, which often are planted in monocultures. Different food items that we used to plant and eat have progressively disappeared from our diet. I see a great potential in reversing this trend.

DER SPIEGEL: Insects are an integral part of the indigenous diet. Start-ups in Paris and in the United States have already begun producing them. The greenhouse-gas emissions they produce are around 200 times lower than beef. Will that be part of the solution?

Fernández de Larrinoa: Insects have many advantages. Humanity has always consumed them. They grow fast, reproduce fast, are protein rich, and are climate friendly. Not only do indigenous peoples eat them, some are seen as delicacies. Snails, ants and crickets are part of the diet in Mexico, Colombia and France. The big challenge with insects lies in reducing the cultural barriers. Think of seafood: Many fishery-communities do not eat shrimp or crab because they are seen as the insects of the sea. In big cities, on the other side, they are seen as gourmet. When I visited the Andes, quinoa was seen as a poor people’s food – until urban restaurants started preparing it, developing delicious recipes. Here, the chefs are key: They have a lot more influence than any government policy or UN recommendation in reshaping diets through recipes and gastronomy.

DER SPIEGEL: In other words, we should stop eating meat and go for an insect burger instead?

Fernández de Larrinoa: Meat is not the problem, per se. With a world population of 9 billion, which we will soon reach, we need healthy proteins that can be produced cheaply and in a climate-friendly manner. Insects could play an important role in coming generations, I am convinced. Yet we cannot say that fish or meat should not be consumed. Fish and meat are important to ensure the food security and nutrition of millions, and there are many countries relying on both fish and meat exports for their economies. There is not one solution for everything: There are communities which have been vegetarians for thousands of years, while others do not eat dairy products. But then there are also ecosystems which require people to eat plenty of meat – think of indigenous peoples in the Arctic. The important thing is that the food system should not overwhelm the replenishment capacity and the self-regeneration ability of nature.

Fernández de Larrinoa: In the supermarkets, we already find the so-called superfoods like quinoa, stevia or acai. They have great nutritional values and all of them come from indigenous peoples. It is important that indigenous peoples decide themselves to what degree planting can be expanded and that their knowledge, and their right to this knowledge, is respected. And it is already happening: Indigenous peoples label and certify their products and sell them – through the internet, for example. As long as the capacities of their ecosystems are not overwhelmed, there is nothing bad about it. But in the case of many superfoods, unfortunately, outsiders have appropriated the indigenous peoples' knowledge and are profiting, while the indigenous communities are left behind with empty hands.

DER SPIEGEL: How can that be prevented?

Fernández de Larrinoa: We are seeing positive examples in the field of medicines. Many medications are based on the knowledge indigenous peoples have of medicinal plants. Some pharmaceutical companies have established agreements with indigenous peoples' communities, and they are involved in the planning and also in the profit. These models could be extended to the food sector.

DER SPIEGEL: Indigenous leaders and environmental activists are under threat around the world. In the last several years, hundreds of them have been murdered in Latin America, Africa and Asia.

Fernández de Larrinoa: They are in the way of commercial interests. The frontier of the intensive agriculture and livestock activities, as well as logging and mining, is increasingly expanding into indigenous peoples’ territories. Every year, large areas are deforested for agriculture, such as in the Amazon. Indigenous peoples there, meanwhile, are having problems feeding themselves because fish and animal populations are being reduced. It’s a paradox: We know that our commercial food system is not sustainable, yet it is being extended worldwide. At the same time, there is enough food on the planet to end hunger. The speed with which indigenous peoples’ territories are being destroyed is breathtaking. We are destroying something which works, without having an alternative. We will not be able to create sustainable food systems if we are not capable of respecting and protecting indigenous territories and learning from their inhabitants.

DER SPIEGEL: Representatives of indigenous communities were strongly represented at the COP26, and their protests have attracted far more attention than they did just a few years ago. Is that a good sign?

Fernández de Larrinoa: Yes, but we are late. The world slowly understands that indigenous peoples are the guardians of the remaining biodiversity and intact ecosystems. During the UN Food Systems Summit this year, it became clear that indigenous peoples’ food systems can be a gamechanger, that they have revolutionary potential to change the current food system – this dystopia we are living in, where millions are suffering from hunger while at the same time, millions of tons of food are being dumped to the garbage. Indigenous peoples are progressively being seen in a different light: no longer mainly as victims of genocide and displacement, but also as wise custodians who have valuable answers as to how we can change the world and help humanity, especially in times of a climate crisis.

This piece is part of the Global Societies series. The project runs for three years and is funded by the Bill & Melinda Gates Foundation.

Indigenous peoples to get $1.7bn in recognition of role in protecting forests

‘Forests are our home’: How indigenous land defenders are fighting the climate crisis.