‘We run from men only to meet crocodiles’: Kenya’s drought is deadly for women 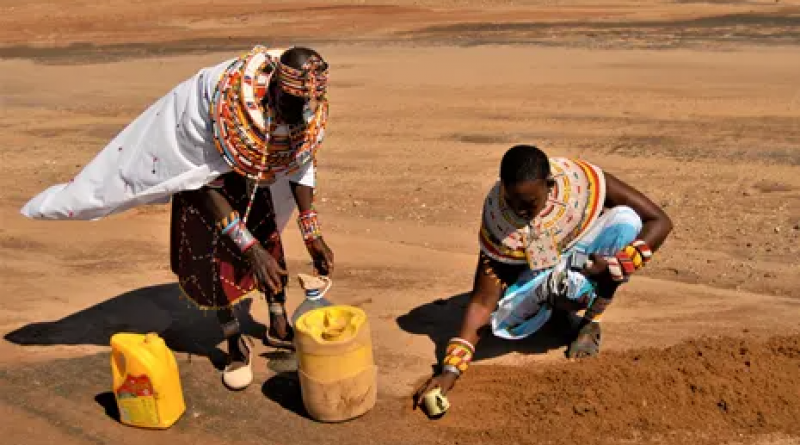 As poverty and lost livelihoods fuel threats in the home, those who have found refuge still risk their lives walking miles in search of water.

The setting sun brings a warm glow to the huts in the village of Umoja in Samburu county, Kenya. Christine Sitiyan sits outside her home with her beadwork, carefully running the thin thread through tiny bead holes, hoping she can finish the colourful belt she is making before darkness sets in. The traditional belt can fetch 3,000 Kenyan shillings (£20), enough to cover her needs for a month.

This tranquil scene is very different from her troubled past. Like many girls in her community, Sitiyan never finished school but was married off as a young teenager. Seven years later, with two children, she left her husband, unable to endure the beatings from a man she says could no longer fend for the family in an increasingly harsh environment.

“He would beat me almost every evening out of frustration,” says Sitiyan, 25. “The drought killed part of his family’s livestock, while raiders from a neighbouring community stole the rest.” He took up manual labour, earning 300 shillings a day, barely enough to provide for the family. “One day, I just took off with the children and found refuge here.”

Sitiyan is among scores of women and girls in Umoja, a village that has become a rescue centre for women and girls escaping domestic violence, female genital mutilation (FGM) and early marriages. There are no men in this manyatta, the traditional homestead.

While the women may have escaped these threats, they are still potential victims of “drought-instigated violence”. Along with women in other marginalised counties such as Garissa, Marsabit, Mandera, Isiolo, Wajir and Turkana, they are at great risk of sexual molestation as they trek long distances in search of water.

John Kitui, country director of Oxfam Kenya, an organisation that works with local groups helping to build resilience, says: “As the drought continues, families have nothing to fall back on and are forced to marry off daughters early to receive dowry payment. Without school fees, it is often girls who are forced out of class who then bear children at a young age. The resulting stress often leads to domestic violence.”

Women are also the unintended victims of tribal conflicts as communities fight over dwindling resources. Men are forced to move remaining livestock tens of kilometres away to find foliage, and the women and children left behind are at increased risk of attacks by bandits.

A 2021 food and water assessment report for Samburu states that conflicts triggered by “competition for rangeland resources … have resulted in loss of people’s lives and their livelihoods”, with local leaders reporting increasing climate-related cases of domestic violence.

Henry Lenayiasa, a chief in Samburu, says cases of violence against women by men who can no longer eke out a living in the harsh environment are on the rise. He says residents may have heard about climate breakdown and how it affects them, “but men who are unable to cope with the drought take it out on women”.

“We have lost livestock in great numbers during the drought. In Kenya’s arid north, a man without livestock cannot provide and loses self-esteem. This is likely to trigger cases of domestic violence. If we do not address climate matters adequately, such cases will only escalate,” says Lenayiasa.

Women in these marginalised communities are exposed to risk of attacks from other men and from wild animals as dwindling resources mean they have to travel farther from their homes to get water or firewood.

“No place is safe for us,” Sitiyan says. “I was almost beaten up after some young men waylaid me on the way to the river, but I managed to escape. It is a risk we take daily in order to provide for our children.”

For Sitiyan and the 38 women in Umoja, the nearby Ewaso Ng’iro River was their main source of water. But its flow has been interrupted by extensive droughts that at times left the river bone dry. A decade ago, Nasa’s Earth Observatory described the riverbed as “a pale tan ribbon of sand” after a prolonged drought in 2009. At other times, the river has flooded and displaced thousands. The river has little water currently, and what there is is contaminated by domestic and wild animal waste.

On a hot Thursday morning last week, the Guardian joined three women – Jane Nomong’en, Paulina Lekureiya and Kareni Lematile – for the 25-minute walk to the river. The unmarked route weaves through thick bushes. “This is where they hide,” Nomong’en says, pointing to a nearby thicket where a moran (young Samburu warrior) tended some goats. “There are no men in our village to protect us from the [troublemakers].” Along the route are several water pans dug in recent years to collect rainwater. It never rained.

A steep gulley leads us to the riverbed where the women find a spot with soft sand and hope it will yield some underground water. Lematile, the youngest, is tasked with scooping out the sand with a cup to make a hole wide enough for water to seep up. It is exhausting. She takes a break every few minutes while the others keep watch. “A 14-year-old boy was killed by a crocodile while fetching water up there,” Lekureiya says. “A woman was also attacked by a crocodile near the same spot. She was five months pregnant. We run away from men only to meet crocodiles.”

It takes Lematile 20 minutes of scooping out sand before water begins to collect at the bottom. Using the cup, she painstakingly collects the water in four, 10-litre containers. This takes another hour. The women take a cupful each, and so does Lematile’s son. “We get some stomach upsets but what options do we have?” says Lematile.

About 100 metres away, a group of young men are scooping out large quantities of sand from the river to fill a truck and sell to developers, much to the chagrin of the women. Sand harvesting leaves the riverbed bare, unable to hold water during the dry season. It also results in floods during heavy rains. The women are afraid that if it goes on they will have to walk even farther to find water, exposing them to more risk of violence and attacks from wild animals.

The women in Kenya’s arid areas know that their future security depends on political efforts being made far away this week at the Cop26 climate talks in Scotland, a country where turning on a tap brings instant water.

“World leaders at Cop26 must deliver on promises to provide finance to these communities to enable them cope with the effects of climate crisis by addressing its root causes,” says Kitui.