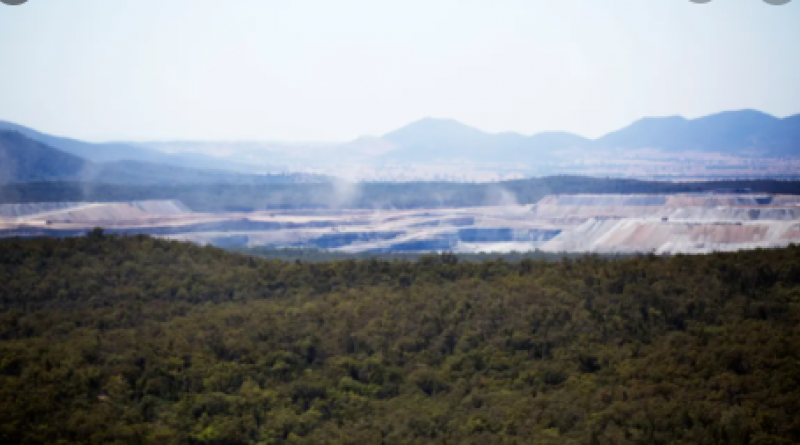 Whitehaven Coal has long set its strategic direction on the implicit assumption that the world would fail to deliver on the Paris Agreement. Its investor communications and Board strategies have largely ignored and more recently downplayed this key financial and strategic risk.

The financial market however is not so blind.

The shares of Whitehaven Coal have collapsed 77% over the last decade as globally significant financial institutions increasingly factor in the cessation of thermal coal use in the decades to come (already 34 announcements year-to-date 2021). 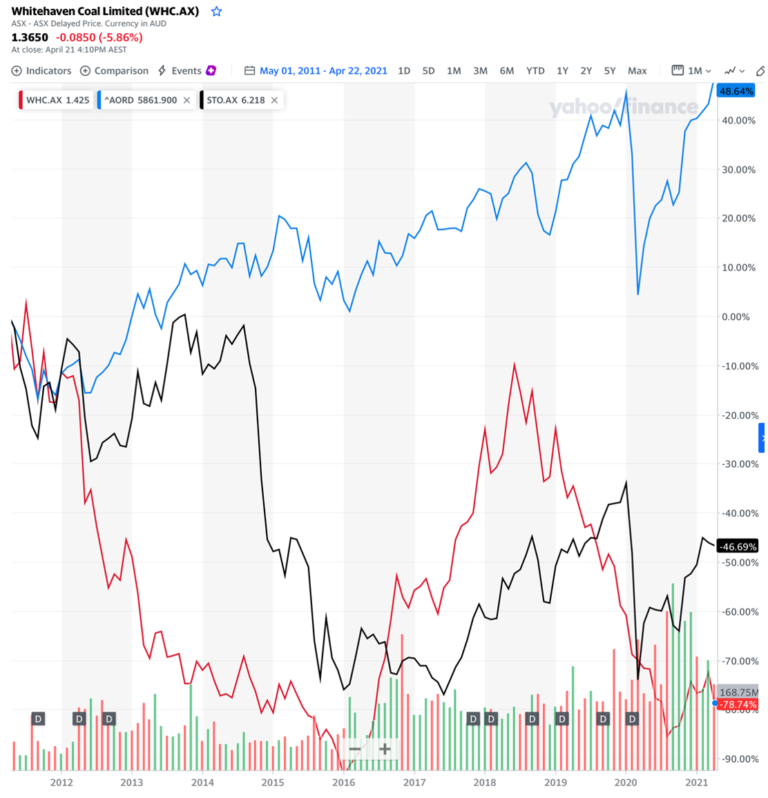 Whitehaven has talked about a diversification strategy into coking coal (for use in steel manufacturing) via its acquisition of Winchester South in Queensland’s Bowen Basin, on the premise coking coal might prove slightly less exposed to the current technology change and decarbonisation push.

At the same time, Whitehaven has continued to invest in developing yet more thermal coal capacity with its attempts to resurrect the long shuttered Vickery mine in Gunnedah in New South Wales (NSW).

As an Australian Stock Exchange listed thermal coal mining firm, Whitehaven Coal exports the vast majority of its coal into a highly competitive international markets. In an equity market up almost 50%, Whitehaven Coal’s massive share price drop over the last decade highlights its shareholder wealth destruction is extreme, and ongoing.

Two weeks ago, Whitehaven Coal’s shares dropped again following its announcement of yet another profit downgrade with the firm citing an unexpected production shortfall, higher operating costs, a major coal quality shortfall, and unexpected geological challenges encountered at another of its thermal coal mines, the Narrabri underground mine in NSW.

Whitehaven’s profit downgrade occurred even as the coal price nearly doubled from its mid-2020 lows of US$46 per tonne (t) to an average of US$89/t in the March 2021 quarter.

While touting itself as a coking and thermal coal mining firm, the March 2021 quarter yet again saw its management’s expectation for higher value coking coal failing to materialise. Below-benchmark thermal coal accounted for 80% of its total production, with coking coal the balance.

Whitehaven Coal acquired a 75% stake from Rio Tinto in the proposed Winchester South opencut coking coal mine for $200m in 2018. This was at the tail-end of Rio’s global exit from coal mining (Rio had long referenced a sputnik moment for coal in relation to climate change and acted early to exit this terminally challenged industry).

Three years later, the Winchester South proposal is at pre-feasibility stage, with Whitehaven recently submitting the draft Environmental Impact Statement (EIS) to the Queensland Government. Public consultation is expected in the June 2021 quarter.

And in a strategy to expand Whitehaven’s thermal coal exposure, Whitehaven acquired the long-closed Vickery coal mine lease from Rio Tinto in 2010 for $32m.

The project is now being reviewed by the Federal Department of Agriculture, Water and the Environment (DAWE) for Environment Protection and Biodiversity Conservation (EPBC) approval. However, it is stalled with an injunction application seeking to restrain the Federal Minister giving an EPBC approval. A decision from the court hearing is expected in May 2021.

In the meantime, Whitehaven Coal was forced to seek debt refinancing in Asia. With the world moving away from coal, its traditional debt sources showed reduced interest. Whitehaven subsequently breached its debt covenants during the collapse in profitability in 2020.

Additionally, historically supportive minority equity partners in Whitehaven’s coal mines, like Itochu of Japan which owns 15% of Maules Creek thermal coal mine also near Narrabri, announced their intention to fully divest from all coal mining.

Whitehaven has long flagged its expectation that Asian coal power utilities would jointly fund the development of Vickery. This is looking increasingly like a false hope in the face of coal divestment announcements by Japanese trading houses Mitsubishi, Mitsui & Co, Sojitz, Sumitomo Corp, Toshiba and ITOCHU.

BlackRock, the world’s largest investor (managing US$8.6 trillion) has also increasingly warned corporates to align their strategy with a net zero emissions by 2050 target. It divested all thermal coal mining debt and equity exposures last year.

The International Energy Agency (IEA) forecasts global coal consumption will decline two-thirds by 2040 if the world acts on the science of climate change. It forecasts a 69% collapse in thermal coal demand by 2040 and a slightly more gradual decline for coking coal, with demand expected to halve globally by 2040.

And Japan committed to a 46% emissions reduction target by 2030 against the 2013 baseline, doubling their targeted rate of decarbonisation over this coming decade. This builds on the Japanese Bank of International Cooperation’s (JBIC) commitment to no longer provide export finance for new coal plants in March 2021, and JERA’s cancellation of a new coal power plant under development in Japan in April 2021.

The tide is clearly rapidly going out for coal finance globally.

It also gives significant new weight to the November 2020 announcement by JERA (Australia’s single largest thermal coal and LNG importer globally) on its plan to be carbon neutral by 2050. JERA’s key strategy is to replace 100% of its thermal coal use with green ammonia within the next two decades. The Japanese Ministry of Economy, Trade and Industry (METI) endorsed this strategy in their draft 2030 Roadmap in February 2021 for all of Japan, not just JERA.

And also last week, China committed to peak coal use in power generation by 2025 and a progressive reduction thereafter, an expansion of President Xi’s landmark pledge of late 2020 to peak China’s emissions by 2030, to reach net zero emissions by 2060.

Shenhua’s announced exit from the Shenhua Watermark thermal coal mine in NSW last week was instigated by the Chinese government, reflecting that the $1bn proposal was a decade behind schedule and no longer strategically relevant to China’s energy policy and decarbonisation commitment.

A decade on from the acquisition of the Vickery coal deposit, the strategic or economic merit of Whitehaven developing this long stranded proposal is indeed questionable.

Boards are employed to serve the interests of shareholders. To IEEFA, the massive wealth destruction for Whitehaven shareholders over the last decade strongly suggests a change of stance is overdue. An acceptance of the science of climate change and a realistic talk with major export customers would be a good starting point.