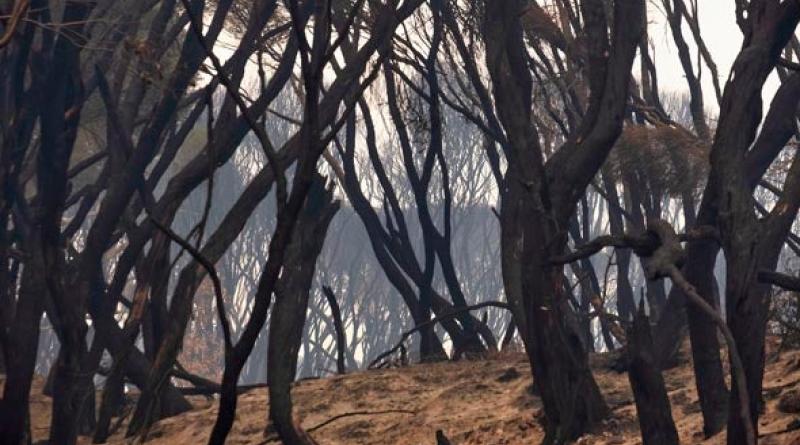 By continent, here are the 2019 temperature rankings:

In the U.S., 2019 was the 34th warmest year on record, going back to 1895, but the year was the warmest on record for Alaska, North Carolina, and Georgia. As detailed in a January 8 post by Weather Underground’s Bob Henson, 2019 was the 2nd wettest year in U.S. history. Marathon, Florida, located about halfway between Key Largo and Key West, recorded an annual average temperature in 2019 of 81.7°F (27.6°C). “This beats by a very big margin every yearly temperature ever recorded in any of the 50 U.S. states,” said weather records expert Maximiliano Herrera.

The remarkable global warmth of 2019 means that the six warmest years on record since 1880 were the last six years—2014 through 2019. The near-record global warmth in 2019 is all the more remarkable since it occurred during the minimum of the weakest solar cycle in 100+ years, and during a year without a strong El Niño (though a weak El Niño was present in the first half of 2019, ending in July). Record-warm global temperatures typically occur during strong El Niño events, and when the solar cycle is near its maximum. The near-record warmth of 2019 is thus a testament to how greatly human-caused global warming is impacting the planet.

The total heat content of the world’s oceans (OHC) in 2019 was the warmest in recorded human history, according to a January 13 paper by Cheng et al., Record-Setting Ocean Warmth Continued in 2019,  published in Advances in Atmospheric Sciences. In the uppermost 2000 meters of the oceans, there were 228 Zetta Joules more heat in 2019 than the 1981−2010 average; 2019 had 25 Zetta Joules more OHC than 2018 (a Zetta Joule is one sextillion Joules-- ten to the 21st power). “We found that 2019 was not only the warmest year on record, it displayed the largest single-year increase of the entire decade, a sobering reminder that human-caused heating of our planet continues unabated,” said Penn State’s Dr. Michael Mann, one of the co-authors. The gain in ocean heat between 2018 and 2019 was about 44 times as great as all the energy used by humans in one year.

More than 90% of the increasing heat from human-caused global warming accumulates in the ocean because of its large heat capacity. The remaining heating manifests as atmospheric warming, a drying and warming landmass, and melting of land and sea ice. The past ten years are the ten warmest years on record for total ocean heat content. Increasing OHC causes sea level rise through thermal expansion of the water and melting of glaciers in contact with the ocean, and contributes to “marine heat waves” that kill coral reefs and disrupt atmospheric circulation patterns.

International records researcher Maximiliano Herrera keeps the pulse of the planet in remarkable detail, and he logged 22 nations or territories that set or tied their all-time heat records in 2019, tying it with 2016 for most such records. No nations or territories set or tied an all-time cold record in 2019. Among the global weather stations with a long period of record of at least 40 years, Herrera documented 632 that set (not tied) their all-time heat record; six of these stations did so twice in 2019, for a total of 638 exceedances of an all-time heat record. Just 11 stations with a long-term period of record set an all-time cold record in 2019.

Here are the all-time records for highest yearly average:

All-time high temperature records were tied or broken in 22 of the world’s nations and territories in 2019, tying it with 2016 for most prolific year on record for all-time national heat records, according to international records researcher Maximiliano Herrera; 2017 holds third place with 14 heat records. Here are 2019’s national heat records, with notations by Herrera at the end:

* The official national record of 42.6°C measured the same day at Lingen is irregular and totally incompatible with nearby stations data and with the atmospheric conditions. The station has a history of overexposure and of being unreliable and is set to be moved. Despite this, the record was made official by the German DWD. Estimated overexposure is estimated to be about 2°C.

** This tied record was dismissed by the Norwegian Met. Service on weak grounds despite being reliable and compatible with nearby stations data and the atmospheric conditions. Confoundingly, the totally unreliable and irregular records set in August 1901—30 years before the installment of the first reliable temperature shelter with a Stevenson Screen in Oslo—have not been dismissed.

*** The Hasakah, Syria station has 1°C precision. The max temperature of 50.0°C is supported by nearby stations, so the record can be accepted.

HEMISPHERIC AND CONTINENTAL TEMPERATURE RECORDS IN 2019

- Highest temperature ever recorded in Asia in March: 46.9°C (116.4°F) at Kapde, India, 25 March. The data comes from a state (not central government) station, and may not be officially recognized, but is supported by data from several nearby stations.

- Highest minimum temperature ever recorded in June in the Southern Hemisphere: 28.9°C (84.0°F) at Funafuti, Tuvalu on 15 June.

- Highest minimum temperature ever recorded in August in the Southern Hemisphere (tie): 28.2°C (82.8°F) at Funafuti, Tuvalu on 15 August.

- Highest temperature ever recorded in October in the Northern Hemisphere: 47.6°C (117.7°F) at Al Wafra, Kuwait on 3 October.

-Highest temperature ever recorded in Africa in November: 47.5°C (117.5°F) at Vioolsdrif, South Africa on 27 November (starting from 28 November, the station started giving incorrect temperatures, but the Nov 27th record was fully confirmed by an almost identical temperature at the Noordower station, a few miles from Vioolsdrif).

NOAA’s January 9 monthly discussion of the state of the El Niño/Southern Oscillation (ENSO) stated that neutral ENSO conditions existed, with neither an El Niño nor a La Niña event in progress. Over the past month, sea surface temperatures (SSTs) in the benchmark Niño3.4 region of the eastern tropical Pacific were near the 0.5°C above-average threshold need to be considered El Niño conditions, though. A strong westerly wind burst (WWB) near the Dateline was in progress this week, which will help keep the ocean close to the El Niño threshold. Most climate models predict that sea surface temperatures in the Niño3.4 region will stay near the El Niño threshold into March before decreasing to near-average levels by late spring.

Forecasters at NOAA and the International Research Institute for Climate and Society (IRI) are calling for a roughly 60% chance of neutral conditions continuing through the Northern Hemisphere spring, and a 50% chance of neutral conditions continuing through the summer of 2020. They put the odds of an El Niño event forming by spring at about 30%; the odds of a La Niña event were less than 10%. For the August-September-October peak portion of hurricane season, the odds of El Niño and La Niña being given were roughly equal, between 25 – 30%.

According to the National Snow and Ice Data Center (NSIDC), Arctic sea ice extent during December was the fifth lowest in the 41-year satellite record. By the end of December, daily sea ice extent was the seventh lowest on record, and the highest since December 2014.

In Antarctica, sea ice extent in December 2019 was also the fifth lowest for December since satellite records began in 1979.

Among global stations with a period of record of at least 40 years, 31 set new all-time heat records in December. There were no stations that set all-time cold records.

The views expressed are those of the author(s) and are not necessarily those of Scientific American.

Jeff Masters worked as a hurricane scientist with the NOAA Hurricane Hunters from 1986-1990. After a near-fatal flight into category 5 Hurricane Hugo, he left the Hurricane Hunters to pursue a safer passion--a 1997 Ph.D. in air pollution meteorology from the University of Michigan. In 1995, he co-founded the Weather Underground, and served as its chief meteorologist until the company was sold to the Weather Company in 2012. Since 2005, his Wunderblog (now called Category 6) has been one of the Internet’s most popular sources of extreme weather and climate change information, and he is one of the most widely quoted experts in the field.

WindEnergy Hamburg 2020 - Meet the Key Players in the offshore segment.