‘It’s a sham’: Egypt accused of restricting protest in run-up to Cop27 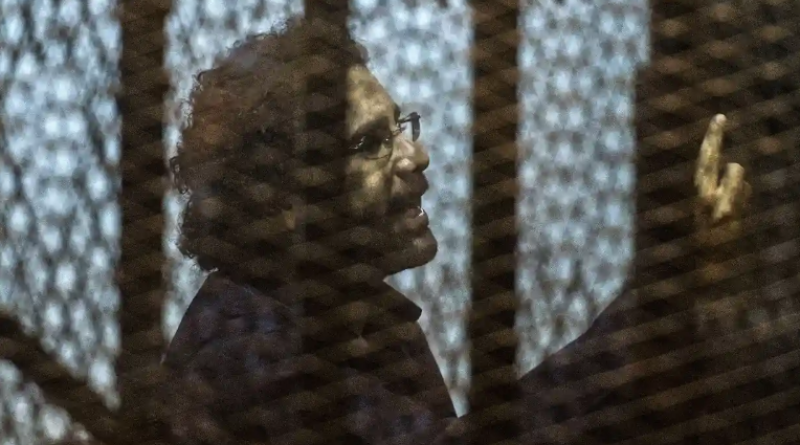 Five months before a pivotal UN climate summit in Sharm el-Sheikh, one of Egypt’s most prominent political prisoners remains behind bars. Now on his 89th day of a hunger strike, Alaa Abd El Fattah is subsisting on just a hundred calories a day, normally in the form of skimmed milk or a spoonful of honey in his tea.

Abd El Fattah, a figurehead of Egypt’s 2011 revolution, has spent most of the past decade in prison. First jailed for organising demonstrations against a law that in effect banned protest altogether, he was re-arrested in 2019 during anti-government protests in which he had no involvement, and last year was sentenced to a further five years in a maximum security prison on charges of “spreading false news undermining national security”, for comments about torture on social media.

In a message passed to his sister during a prison visit last week, Abd El Fattah noted the irony of the Cop27 UN climate summit taking place in Egypt. “Of all the countries to host they chose the one banning protest and sending everyone to prison, which tells me how the world is handling this issue. They’re not interested in finding a joint solution for the climate,” he told her.

Environmental campaigners and activists fear that Abd El Fattah’s case is a litmus test for Egypt’s commitment to allow protest at Cop27 and that their voices will be ignored at a time when governments desperately need to hear from civil society about the worsening effects of the climate crisis.

“A decade ago, the world cheered as a new generation of Egyptian activists occupied Tahrir Square and overthrew a tyrant,” said the author and activist Naomi Klein, who wrote the foreword to a book of Abd El Fattah’s essays published last year, some of which were smuggled out of prison. “But soon, the brutality of dictatorship descended once again and many of the courageous young people who led that uprising were killed, tortured or disappeared into prison cells. Among them the brilliant writer, theorist and inspirer of his generation, Alaa Abd El Fattah.

“The international climate movement must start paying attention to what is happening in Egypt’s prisons. We cannot sleepwalk to Cop27 as if these are not crimes against humanity.”

Abd El Fattah began a hunger strike in protest at his treatment in prison, including the Egyptian authorities’ refusal to allow British officials to visit him and check on his wellbeing, after he became a British citizen last year. His sister, Mona Seif, now also a British citizen, is on her 18th day of consuming only water and salt, joining her brother in protest at the British and Egyptian authorities’ refusal to acknowledge his hunger strike.

Abd El Fattah’s case shows the high price that many young Egyptians have paid for daring to protest and demand democracy.

Since coming to power in a military coup in 2013, the Egyptian president, Abdel Fatah al-Sisi, has purged all political opposition, even from within his own regime, and conducted a sweeping crackdown on civil society and dissent. Egypt’s prison population has ballooned, fed by doctors, journalists, businesspeople, citizens protesting against a fare increase on the Cairo metro and even tourists posting on Facebook. Sisi has long claimed, however, that there are “no political prisoners in Egypt”.

Klein said: “It is clear that Sisi sees the presidency of Cop27 as an opportunity to wash our memories clean, and rebrand Egypt as a safe place for your next vacation or conference.

“The international climate movement must not be party to this greenwash and cover-up. Now is the time to pressure all of our governments to use their leverage to demand the release of political prisoners, starting with Alaa Abd El Fattah. Without these concessions, Cop27 will do more harm than good.”

The Egyptian foreign minister, Sameh Shoukry, tasked with overseeing Cop27, said in May that Egypt would allow demonstrations in Sharm el-Sheikh, albeit in an area separate from the talks. “We are developing a facility adjacent to the conference centre that will provide them the full opportunity of participation, of activism, of demonstration, of voicing that opinion,” he said. “We will also provide them access, as is traditionally done on one day of the negotiations, to the negotiating hall itself.”

Ken Roth, the executive director of Human Rights Watch, said: “It has long been apparent that governments need pressure from civil society to address climate change meaningfully. But President Sisi has devoted his rule to suppressing civil society and any independent voice that criticises his repressive reign. That is the opposite of what is needed for a successful Cop.”

An Egyptian environmental expert, who protested alongside Abd El Fattah in 2011 and asked not to be named, said: “What the global climate justice movement needs to understand about Alaa’s case is that it represents the plight of tens of thousands of political prisoners and prisoners of conscience in Egypt.

“If Egypt’s political prisoners aren’t released ahead of the Cop, that may lead to the Cop being complicit in Egypt’s greenwashing of its human rights record,” they added.

They warned that Egyptians are unlikely to enjoy the benefits of the promised space for protest in November, or that those who join risk surveillance and detention.

Seif said: “This is about more than just Alaa. It’s about a bigger picture of how joining and coming to this place is therefore endorsing this government while they are silencing everyone who talks about anything. They are not allowing any kind of dissent. It’s a sham.”

The Egyptian foreign ministry, which is overseeing preparations for Cop27, declined to comment when contacted by the Guardian.

Cop27 summit must focus on how world will adapt to climate change, says UN envoy

UN urged to move Cop27 from Egypt over ‘LGBTQ+ torture’