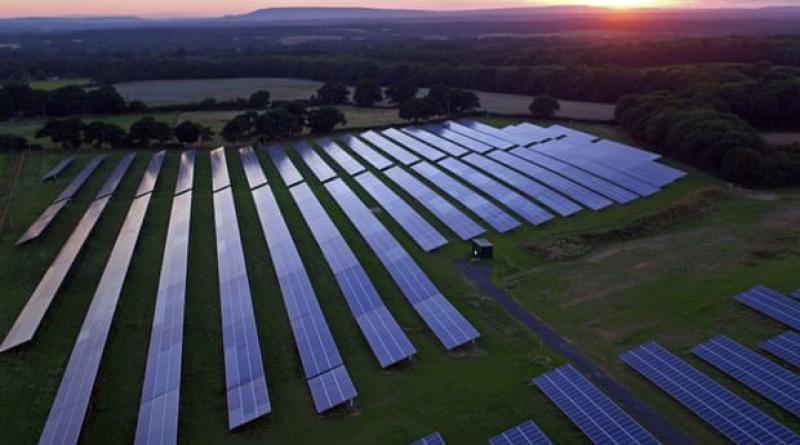 Most new electricity globally was green and coronavirus bailouts must boost this further, says agency.

Fossil fuel power plants are in decline in Europe and the US, with more decommissioned than built in 2019. But the number of coal and gas plants grew in Asia, the Middle East and Africa. In the Middle East, which owns half the world’s oil reserves, just 26% of new electricity generation capacity built in 2019 was renewable.

The world has invested about $3tn in renewables over the past decade, according to Irena, but annual investments must double by 2030 to tackle the climate emergency. 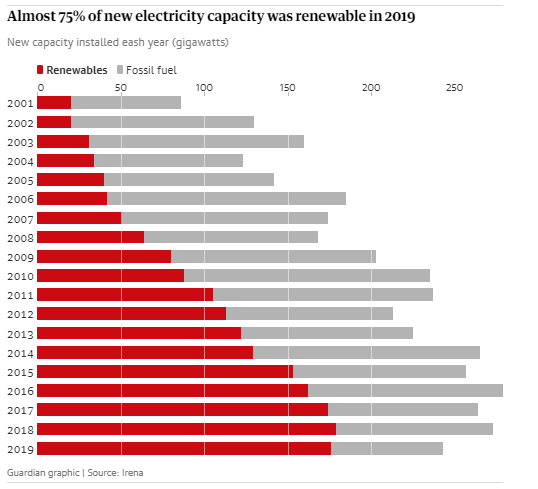 “While the trajectory is positive, more is required to put global energy on a path with sustainable development and climate mitigation,” said Francesco La Camera, director general of Irena. “At this challenging time, we are reminded of the importance of building resilience into our economies.”

La Camera said the huge spending planned by governments in response to the coronavirus pandemic must support green initiatives rather than fossil fuels. “In responding to today’s crisis, governments may be tempted to focus on short-term solutions,” he said. “Yet distinctions between short-, medium- and long-term challenges may be deceptive. The pandemic shows that delayed action brings significant economic consequences.”

The global oil market is in turmoil, hit by collapsing demand due to Covid-19 lockdowns and a savage price war between Saudi Arabia, Russia and the US. La Camera said: “Renewable energy is a cost-effective source of new power that insulates power markets and consumers from volatility.” Solar and wind power are now the cheapest form of electricity in two-thirds of the world.

The Irena data shows the increase in new renewable energy capacity slowed slightly in 2019 - from 179GW to 176GW – but that new fossil fuel power also fell. The total green energy installed to date around the world grew by 7.6%, with the UK’s total rising 6.1%. The UK is now 11th in the world for installed renewables.

New solar power provided 55% of the new capacity, most of which was installed in Asia, with China, India, Japan, South Korea and Vietnam leading the way. Other major increases were seen in the US, Australia, Spain, Germany and Ukraine.

Wind power made up 34% of the total, with almost half in China and significant additions in the US. Global wind power capacity remains just ahead of solar, with 95% being onshore turbines.

Other green technologies – hydropower, bioenergy, geothermal and marine energy – all grew modestly year-on-year. While small compared with solar and wind power, geothermal energy – tapping the heat of deep rocks – is growing, with Turkey, Indonesia and Kenya leading the way.

How changes brought on by coronavirus could help tackle climate change.