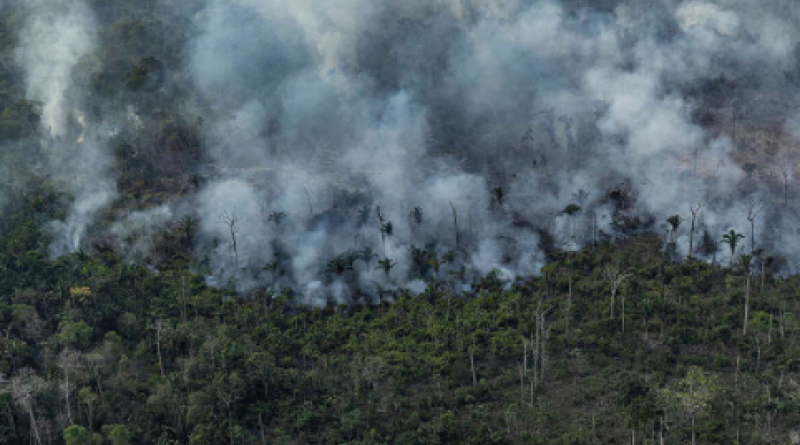 No amount of greenwashing by the Brazilian government can obscure the truth: The Amazon is being destroyed at a historic rate.

The country’s PRODES monitoring system shows there was a 21.97% increase in deforestation compared to the previous year and the highest rate of forest destruction since 2006. Between August 2020 and July 2021, Brazil president Jair Bolsonaro’s anti-environment government has overseen the destruction of 13,235 km² in the Amazon — an area 17 times the size of New York City.

This data was released just days after the conclusion of COP26 where Bolsonaro attempted to greenwash the environmental destruction in Brazil. Over the course of his administration, the government has slashed environmental protections, weakened agencies responsible for monitoring and protecting the forest, and put the rights and lives of Indigenous Peoples at risk.

Despite international pressure for countries to ensure their products are clean of deforestation, the agreement signed by Bolsonaro and other world leaders at COP26 gives green light to another decade of forest destruction. The Amazon is already on the brink, with some areas already emitting more carbon than they can capture due to deforestation, according to a study.

There’s no more time to waste. Even though Brazil’s energy comes from hydroelectric power instead of fossil fuels, the country is still one of the top carbon emitters due to deforestation and industrial agriculture, and the Brazilian Congress, which is aligned with Bolsonaro’s agenda, keeps pressing for more anti-environmental bills that would reward land grabbing and threaten Indigenous Peoples’ lands and rights even more.

The destruction of the Amazon is a threat of multiple levels: it is a risk to the health of those living near the forest, who have to breathe the poisonous smoke originating from the fires; a threat to the balance of the global climate, which depends on the forest standing to absorb carbon; and a threat to the lives of Indigenous Peoples, who have their lands invaded by land-grabbers and are often met with violence. According to a report by Brazilian organization CIMI, 263 Indigenous People were killed in 2020 as a result of confrontations with invaders.

This widespread destruction is unacceptable and must be stopped. World leaders must take meaningful action and stop giving a platform and social license to a government that is putting so much at risk. That means not making deals with Bolsonaro that threaten the forest even more, and demanding that companies disclose their supply chains and prove products coming from Brazil are completely clean of deforestation and human rights abuse.

We don’t need more forest destruction for industrial cattle ranching and soy farming. Indigenous Peoples and traditional communities already have sustainable practices that can feed the world without putting people and the planet at risk. It’s time to take action now and present further destruction that we cannot afford.