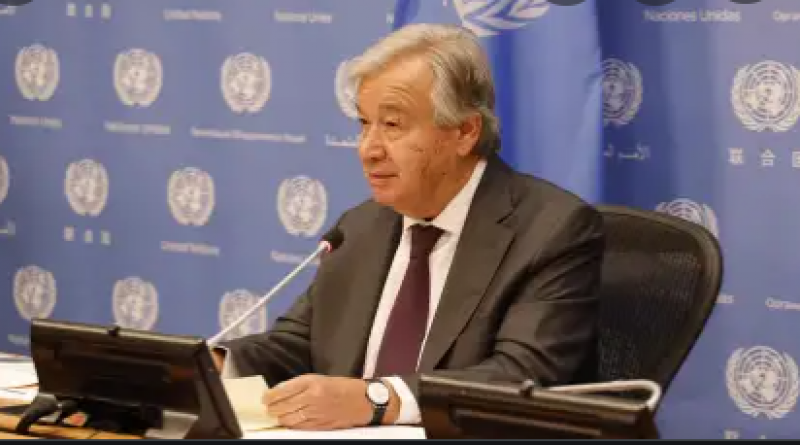 Today’s report from the United Nations Framework Convention on Climate Change on the Nationally Determined Contributions of all Parties to the Paris Agreement shows that the world is on a catastrophic pathway to 2.7-degrees of heating.

This is breaking the promise made six years ago to pursue the 1.5-degree Celsius goal of the Paris Agreement. Failure to meet this goal will be measured in the massive loss of lives and livelihoods.

Science tells that we need a 45 per cent cut in emissions by 2030 to reach carbon neutrality by mid-century. Today’s report implies an increase of 16 per cent in emissions in 2030 compared to 2010 levels.

The recent report of the Intergovernmental Panel on Climate Change was a code red for humanity. But it also made clear that it is not too late to meet the Paris Agreement 1.5-degree target. We have the tools to achieve this target. But we are rapidly running out of time.

G20 nations account for 80% of global emissions. Their leadership is needed more than ever. The decisions they take now will determine whether the promise made at Paris is kept or broken.

Before COP 26 all nations should submit a more ambitious NDC that help to place the world on a 1.5-degree pathway. We also need developed nations to finally deliver on the US100 billion commitment promised over a decade ago in support to developing countries. The Climate Finance report published today by the OECD shows that this goal has not been reached either.

Finally, we need all donors and MDBs to commit to provide at least 50% of their public climate finance towards supporting vulnerable developing to build resilience to worsening climate impacts.

The fight against climate change will only succeed if everyone comes together to promote more ambition, more cooperation and more credibility. No more ignoring science. No more ignoring the demands of people everywhere. It is time for leaders to stand and deliver, or people in all countries will pay a tragic price.

Thank you for inviting me.

You represent the world’s leading economies.

And the world now needs your leadership more than ever.

The recent report of the Intergovernmental Panel on Climate Change was a code red for humanity.

But it also made clear that it is not too late to meet the Paris 1.5-degree target.

We are rapidly running out of time.

We must step up our efforts.

We need a 45 per cent cut in emissions by 2030 to reach carbon neutrality by mid-century.

The world is on a catastrophic pathway to 2.7-degrees of heating.

There is a high risk of failure of COP26.

It is clear that everyone must assume their responsibilities.

We need more ambition on finance, adaptation and mitigation.

On finance, developed countries must fulfil the longstanding pledge to mobilize $100 billion dollars a year to support climate action in developing countries.

Today, the OECD, that essentially represents the developed world, published its annual report on climate finance.

They still reveal a gap of at least 20 billion dollars.

This is a crucial question of trust.

So is the mobilization of assistance from the private sector — both financial and technological.

Moving to adaptation, we know levels of finance for this crucial component are still far too low.

Developing countries received only $16.8 billion dollars in 2018 – compared to adaptation costs of some $70 billion.

We must commit at least 50 per cent of climate finance to adaptation.

I thank Denmark, Sweden and the Netherlands who have stepped up in this direction.

We need more to join this coalition.

On mitigation, I do understand the principle of common but differentiated responsibilities.

And developed countries certainly need to take the lead.

But it is essential for several emerging economies to go the extra mile and effectively contribute to emissions reductions.

I want to mention one specific challenge.

If all planned coal power plants become operational, we will not only be clearly above 1.5 degrees — we will be well above 2 degrees.

The Paris targets would go up in smoke.

We need coalitions of solidarity – between countries that still depend heavily on coal, and countries that have the financial and technical resources to support transitions.

The fight against climate change will only succeed if everyone in this room comes together to promote more ambition, more cooperation and more credibility.

The world demands that all of us but especially you as the leading economies of the world take immediate action to lead us towards a sustainable and resilient future.

I ask you to rebuild the spirit of collaboration, cooperation and goodwill that were the hallmarks of the Paris Agreement.

I ask you to consider how we can deliver success in Glasgow.

Prime Minister Johnson and I have invited you all to the leaders’ dialogue we are convening in New York on 20 September to continue this conversation.

I look forward to your engagement.

UNFCCC: Just over half of countries signed up to Paris Agreement submit NDCs before deadline