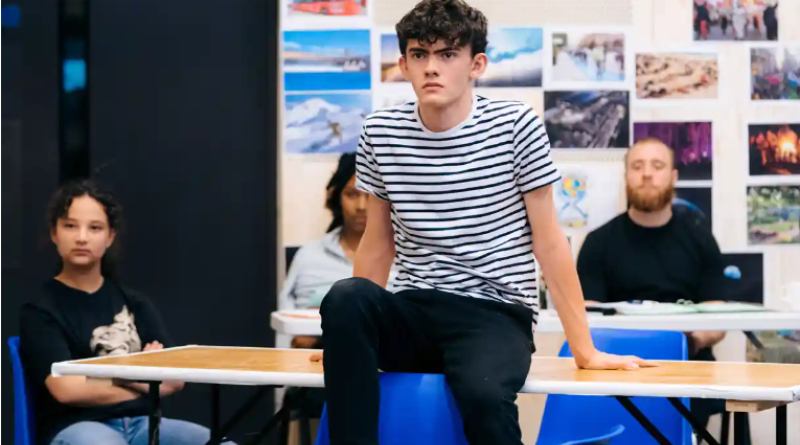 In 2019, the playwright Dawn King was booking flights to New York for a writing residency. It was the day of the UK’s first large-scale School Strikes for Climate, a movement launched by Greta Thunberg in Sweden. Checking her news feeds, King – who had meant to join the protests – realised she had clean forgotten. She winces at the memory.

“I thought, ‘Wow, you think you’re so green, such a liberal, but you’re not helping, are you? In the future you’ll be judged as harshly as everyone else. What are you actually doing?’”

So King did what she knows best: the script that emerged, assembled mainly in the first lockdowns of 2020, was The Trials, staged this month at the Donmar in London. The play imagines a world a few decades into the future where a group of people are on trial, Nuremberg-style, for their culpability in the climate crisis. How many flights did they take? Did they eat meat? Sure, they recycled, but so what? The penalties for exceeding personal carbon allowances are severe; the jurors are played by teenagers who have inherited the mess. The defendants are clearly stand-ins for the rest of us, who have fiddled while Rome (and many other places) burned.

The Trials is a “thought experiment”, King explains, but part of what makes this blame game chilling is that this is a future closer than we want to think. In the play, the young jurors debate whether they can safely open a window because it’s so hot and polluted outside. Rehearsals started on the day the UK Met Office issued its first ever red warning for extreme heat. On the afternoon I visit, wildfires are tearing into California yet again, and hundreds in Germany and the Czech Republic are being evacuated. Extreme though the scenario is, The Trials is hardly science fiction. “Look around,” King says with a shrug. “In some places we’re already there.”

In one scene I watch being rehearsed, the jurors fantasise what it might be like to fly in a plane, a mode of transport that has essentially been banned. Flinging together tables and chairs in the jury room to mock up an aircraft cabin, they rhapsodise about escaping the horrors at ground level – flooding, food shortages, refugee crises – and soaring into the “blue blue sky” as their parents and grandparents once did. An ice-cold Coke and a bag of in-flight peanuts are impossible-to-imagine luxuries.

In another scene, somehow even sadder, they speculate what it might be like to encounter snow. The idea of jetting off on a skiing holiday is brain-boggling. “I’ve seen video, but …” one of them says.

King’s decision to employ a group of teens (the youngest is 12, the oldest 18) gives the piece an appealingly lopsided energy. Yes, these kids are reckoning with the consequences of the climate crisis, but they also want to flirt, kiss, mess around – just live their lives. While the Donmar has hired some seasoned pros – Joe Locke and William Gao, both stars of the Netflix series Heartstopper, appear – a number of the cast were found via the theatre’s “Local” scheme, which brings in schools and community groups from nearby boroughs. Nearly 1,400 young people were involved, some 200 of whom participated in intensive workshops at the Royal Central School of Speech and Drama.

This felt important to do, explains director Natalie Abrahami: “The theme of the play seemed to call for it, somehow. This sense of activism, engagement.”

What attracted Locke, now 18, to the project? It transpires that he first read the script on a plane on the way to an acting job. He pulls a face. “I was like, ‘Oh my God, I’m both the generation that should be making the change, but I’m also here, pumping out carbon,” he says.

Does he share the characters’ anger about who’s responsible? “I don’t necessarily think it’s anger towards an individual generation,” he replies carefully. “It’s more like feeling disenfranchised. It makes a lot of young people want to get involved in changing things.”

Francis Dourado, 15, who’s been fitting rehearsals around his GCSEs, is less diplomatic. “In the future, those people in power [now], they’re not going to be there any more,” he says quietly. “We’ll be the ones left with a world that’s already dying. It might already be too late to save it. I hope it’s not, but …”

King has form when it comes to putting dystopias on stage. Her breakout play was 2011’s Foxfinder, which captivated critics with its eerie portrayal of a rural community in which foxes are blamed for everything from bad harvests to contagion, like 17th-century witches, and must at all costs be rooted out. Her incisive 2015 adaptation of Aldous Huxley’s Brave New World was followed by a collaboration with grime MC and rapper Skepta, Dystopia987, which attempted to present what the club scene of the future might look like.

Partly it’s coincidental, she laughs: write one successful dystopia and producers think that’s all you can do. “But the thing I’d say is that right now we’re living in a dystopia. We’ve just been in a 40C heatwave, wildfires aren’t just in Europe, but in Kent. How much more dystopian do you want to get?”

Courtroom dramas are nothing new, but when a German version of the play debuted in Düsseldorf last summer, some critics raised eyebrows at the way the script pits the generations against one another, with teenagers called upon to denounce people of their parents’ age in ways that seem uncomfortably reminiscent of the Chinese Cultural Revolution or the US’s McCarthyite witch-hunts.

Are the creative team worried that some people in the audience will feel attacked? Abrahami replies that The Trials is intended to provoke debate, and hopefully action. “The play is one act, with no interval; the second half is the conversation that you have with whoever you came to see the show with. How does it change the way you think? What do you want to change in your own life?”

King says that she’s as much on trial here as anyone else. “It’s not me pointing the finger at other people, definitely not.” She holds up her hands. “From this point on, people will always say to me, ‘Oh, did you fly? Did you not take the train?’ I’m putting myself up here.”

Despite many attempts, theatre has often struggled to communicate the immensity of the climate crisis or map out ways to solve it. What makes this show different? “The play is activism; I wrote it to change things,” King replies, pointing out that the theatre is collaborating with the environmental arts charity Julie’s Bicycle to measure its impact, and is employing the new Theatre Green Book so that the set, props and other elements are reusable or recyclable. This will be a roadmap for future Donmar shows.

Despite the bleakness she puts on stage, there is hope in The Trials too, she adds. “There are elements of utopia. These young people are living in a world where the climate emergency is being taken massively seriously. We need to listen to that.” Locke agrees: “The play shows what the future could be, not what it will be. That’s an important distinction to make.”

When I ask if he thinks people will really change the way they live, Dourado looks grave, seeming much older than his years. “I think they will change because now more than ever, we see everything happening so fast around us. A lot of people are starting to wake up and realise.” How about Locke? “You have to stay optimistic because otherwise you can’t change anything.”

Abrahami is nodding. “I’m sort of a hopeaholic,” she says with a smile. “You have to be, don’t you?”

Humanity can’t equivocate any longer. This is a climate emergency