Ammonia from farms behind 60% of UK particulate air pollution – study 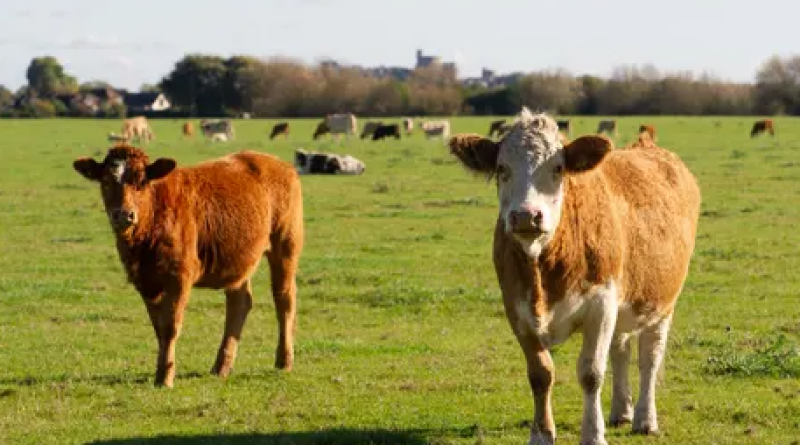 Problem is causing £8bn a year in health damage but can be tackled cost-effectively, say scientists

Sixty per cent of the tiny particles polluting the air in the UK are from ammonia leaking from farms, according to research.

The ammonia is released from livestock manure and urine and the overuse of synthetic nitrogen fertilisers. The gas drifts into cities and reacts with other air pollutants to form tiny particulate matter, called PM2.5, which is the deadliest form of air pollution.

These particles cause £8bn a year in health damage in the UK, the scientists calculate. Globally, 39% of PM2.5 is derived from ammonia and results in $420bn (£320bn) of health damage, according to the study, published in the journal Science.

Ammonia can be trapped on farms by sealing manure pits or injecting the waste under fields, and by the more efficient use of fertiliser. Such action saves £23 in health damage for every £1 spent in the UK, say the researchers, with the global cost benefit ratio being 4:1.

In the past, the burning of fossil fuels by vehicles and industry produced large amounts of PM2.5 but pollution controls have cut levels significantly in developed nations. However, ammonia emissions have barely fallen in the UK since 1980. This means agriculture is now responsible for a larger share of PM2.5 in the UK. Pollution from wood burning stoves has also risen in prominence.

Other nitrogen compounds, called nitrogen oxides, are emitted by diesel vehicles and damage health in two ways: as irritant gases when first emitted and then by combining with ammonia to form PM2.5. Relatively little has been done to cut ammonia emissions, meaning there are simple policies that would be far more cost-effective in reducing PM2.5 levels than further technological measures to tackle nitrogen oxides from vehicles, the scientists say.

Cutting nitrogen pollution would also tackle the climate crisis, the pollution of rivers and seas, and soil acidification. Nitrous oxide is a potent greenhouse gas, causing about 6% of global heating and results mostly from the overuse of fertilisers.

The researchers presented a “#Nitrogen4NetZero” proposal at the Cop26 summit in Glasgow on Wednesday, which aims to ensure cutting nitrogen gases is included in climate targets. The 2019 Colombo declaration, led by Sri Lanka and backed by the UN Environment Programme, aims to cut nitrogen waste by half by 2030 and would save $100bn (£75bn) a year in wasted fertiliser costs.

“The way we use nitrogen is extremely inefficient. About 80% of the nitrogen resources [produced by humans] are lost into the environment,” said Prof Mark Sutton of the UK’s Centre for Ecology and Hydrology, a co-author of the study.

The UK government is consulting on banning the use of urea in fertiliser, which emits much more ammonia than ammonium nitrate fertiliser. The Netherlands and Germany already require manure to be injected into fields rather than sprayed on the surface, but there is no such requirement in the UK. “Any farmer that can smell their manure is losing that goodness,” said Sutton.

Air pollution causes at least 7 million premature deaths a year globally, making it a bigger killer than smoking, car crashes or HIV/Aids. Air pollution may be damaging every organ in the human body, according to a comprehensive global review in 2019.

It’s not just CO2. We urgently have to tackle methane emissions