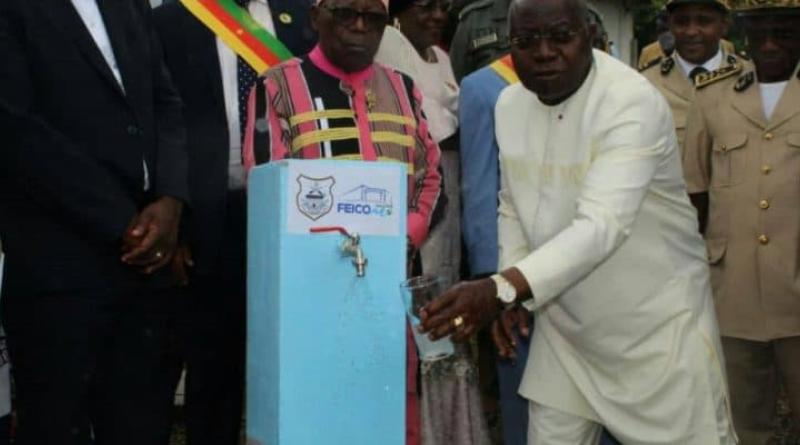 The Cameroonian government is inaugurating two drinking water supply systems in the southern region. The installations are equipped with hybrid solar mini-power stations with batteries for electricity storage and generators.

In Cameroon, the Minister of Decentralisation and Local Development, Georges Elanga Obam, recently visited the Southern Region. It was for the inauguration of two drinking water supply systems in the communes of Nkoteng and Lolodorf. In the locality of Nkoteng located in the department of Haute Sanaga, the municipality has set up a system consisting of seven boreholes, a water tower with a capacity of 200 m3 as well as a distribution network equipped with 21 standpipes.

The entire system is powered by two small solar power plants equipped with 112 modules and 56 batteries for electricity storage. The water supply system “benefits more than 20,000 inhabitants of Nkoteng and is in line with the operationalisation of the National Development Strategy 2020-2030, which prescribes universal and equitable access to drinking water”, says the Fonds spécial d’équipement et d’intervention intercommunale (FEICOM).

The construction of the new drinking water supply facilities serving the Nkoteng neighbourhoods was financed to the tune of 702 million CFA francs (over one million euros) by the FEICOM. This public body in charge of financing municipalities in Cameroon also financed the Lolodorf drinking water supply system, which was recently inaugurated by Minister Georges Elanga Obam.

This water supply system is equipped with pumping stations, a treatment unit, a 50m3 water tower and a photovoltaic solar system to supply the whole. According to Philippe Camille Akoa, FEICOM’s director general, the water supply system serves 6,000 people in the centre of the Lolodorf commune through 25 standpipes and individual connections. These works cost 416.7 million CFA francs (over 635,000 euros).

The implementation of these two projects will increase the rate of access to drinking water in the south of Cameroon and at national level. In 2018, the average rate of access to drinking water was 77% in urban areas and 45% in rural areas, according to official data. However, much remains to be done to secure the supply, especially in urban areas where the public service company Cameroon Water Utilities Corporation (Camwater) is experiencing some difficulties in meeting its commitments to the population.

Tax incentives put Cameroon on the road to solar power