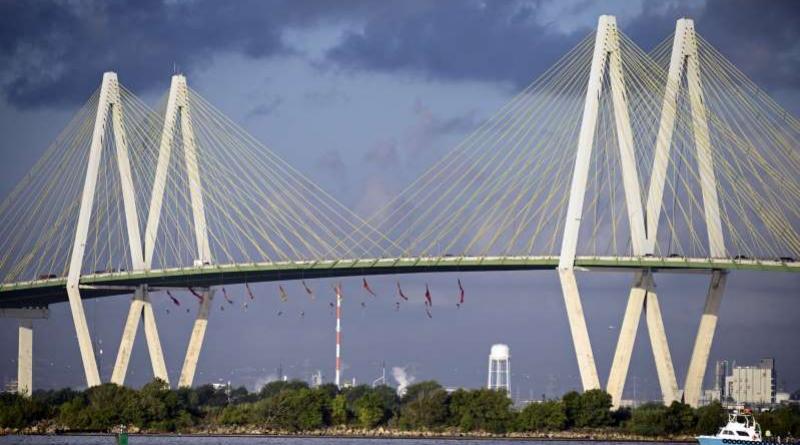 Greenpeace climate activists climbed Houston's Fred Hartman Bridge hours ahead of the Democratic debate on Thursday to shut down shipping traffic and call for a shift to renewable energy.

Greenpeace said in a press release that 22 activists were participating in the blockade on the bridge and that they intended to continue for 24 hours. The debate will take place at Houston's Texas Southern University on Thursday night.

The protest targets a route that is widely used by fossil fuel companies. Over 35 percent of United States crude oil exports came through the Houston Shipping Channel region in 2018, according to the Houston Chronicle, which cited a report from global financial services firm Morningstar.

Greenpeace's pictures of the protest showed the activists dangling from the bridge with banners unfurled. The organization's activists have previously used this tactic in climate protests around the world, such as in 2015, when they dangled off a bridge in Portland, Oregon, to impede Shell's Arctic drilling plans and earlier this year in Sydney, Australia, when they scaled a bridge and demanded emergency climate change action.

"I grew up in the East Texas Oil Field, a place where the oil industry touches everything. I know how much power oil executives have over our democracy. That's why I'm taking action to shut down the Houston Ship Channel," Greenpeace USA activist Mike Herbert, who is one of the organizers involved in the protest, said in the press release.

"To the presidential candidates gathered in Houston today, we need you to know there is no middle ground to stand on. Will you champion a Green New Deal and ensure a just transition away from fossil fuels? Or will you side with the corrupt billionaires trying to wreck the planet for their profit? Millions of Americans are waiting on your answer," Herbert continued.

Climate change has emerged as a central topic in the 2020 presidential race, and the Democratic candidates held a 7-hour town hall on climate change earlier this month.

Washington Governor Jay Inslee, who dropped out of the primary contest last month, designed his campaign around an ambitious climate platform and served as a central force in elevating discussions of global warming in the race.

His emphasis on addressing global warming placed a spotlight on the issue, and Democratic contenders have released their own ambitious plans to address climate change. Some have consulted with Inslee since he ended his campaign.

Eighty-four percent of Democrats and Democrat-leaning independents say that climate change poses a major threat to the country, according to Pew Research figures released in August. The pervasive level of alarm indicates a vast increase in concern from just six years earlier, when 58 percent of such voters said that climate change represented a threat to the country's well-being.