Climate activists in Italy glue themselves to Botticelli painting 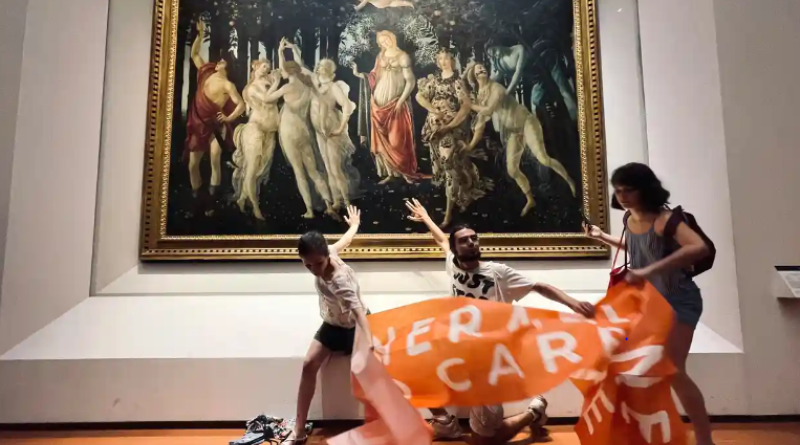 Environmental protesters have glued themselves to the glass protecting Sandro Botticelli’s Primavera which is on display at an art gallery in Florence.

The activists, from the climate activist group Ultima Generazione (Last Generation), said the protest was the first in “a new season of actions” targeting museums. It appeared inspired by Just Stop Oil activists in the UK who recently conducted a similar campaign of protests in art galleries.

Two protesters stuck their palms to the exhibit at the Uffizi gallery beforehand, with the help of a third, unfurling a banner reading “Ultima Generazione No Gas No Carbone (Last Generation, No Gas, No Coal).”

A man and two women, who had paid for tickets to get into the gallery, were taken away by police, according to the Italian news agency Ansa.

No damage was caused to the painting, Ansa cited the museum as saying. Botticelli’s 540-year-old Primavera (meaning Spring) is one of the world’s most famous paintings. The Uffizi gallery’s website describes the painting as “a celebration of love, peace, and prosperity”.

“Is it possible to see a spring as beautiful as this today?” Ultima Generazione said in a statement.

“Fires, food crises and drought make it increasingly difficult. We decided to use art to sound an alarm call: we are heading towards social and eco-climate collapse”.

The group said they had consulted with art restoration experts to find a way to glue themselves to the painting without damaging it. “In the same way that we defend our artistic heritage, we should be dedicated to the care and protection of the planet that we share with the rest of the world,” a statement on the group’s website said.

Ultima Generazione has been taking action in Italy since December, with an initial set of actions blocking roads around Rome, Italy’s capital.

It is one of a number of activist groups that have sprung up around Europe and in Canada and Australia inspired by the tactics of Insulate Britain, whose roadblock protests around London and south-east England caused massive disruption and spurred a national conversation about climate change and home insulation.

Like Insulate Britain and Just Stop Oil, Ultima Generazione has received funding from the US-based Climate Emergency Fund, a philanthropic fund set up to channel money to direct action groups.

‘Like a public shaming’: a night with the eco-activists deflating SUV tires

Just Stop Oil: Activists says they have 'a duty to protest'