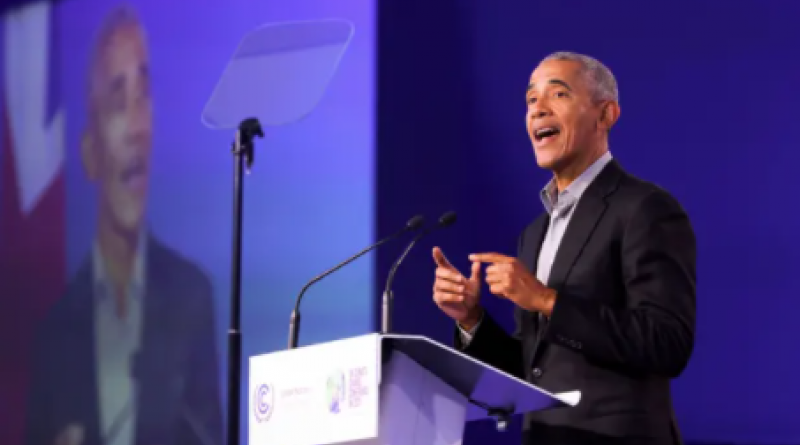 Day eight at the Glasgow summit focuses on loss, adaptation and damage

That’s me done for today!

Here is the evening summary of today’s events:

I leave you with the news that Glenfiddich distillery has created a limited-edition 26-year-old whisky to commemorate Cop26. There will be a charity auction later this month, with all proceeds going to Stop Climate Chaos Scotland.

Have a great evening.

African nations want Cop26 to open discussions this week on a mega-financing deal that would channel $700bn (£520bn) every year from 2025 to help developing nations adapt to the climate crisis.

Tanguy Gahouma-Bekale, the chair of the African Group of Negotiators on climate change, said the increased finance was needed for the accelerated phase of decarbonisation required to hold global heating to 1.5C.

He said: “The work on this needs to start now ... Talks about finance take time so we need to have a roadmap now with clear milestones on how to achieve targets after 2025 to ensure the money flows every year.”

The European Union’s most senior climate envoy has called on other rich countries to come up with emissions reduction plans and money to help developing nations deal with the climate emergency.

The European Commission vice-president Frans Timmermans said he hoped to convince other major emitters “not just to declare a date for carbon neutrality or climate neutrality” but come forward with policies to achieve it.

Since the EU agreed its net zero goal in 2019, it has proposed a vast set of legal proposals to transform the European economy, although the measures are yet to be agreed by the EU member states and European parliament.

Timmermans said: “If we don’t make a success of this Cop, it’s difficult to see how we can reduce [in] half the emissions in less than ten years. It needs to happen right now.”

One occupant said: “Baile Hoose has provided a safe home and meals for hundreds of activists during this summit. There have been a lot of people who have travelled here from all over the world and the country, and quite often people from marginalised communities are not getting their voices heard.”

Glasgow city council, which owns the building, asked the activists to leave last week, warning its water supply could be unsafe, and the building could contain asbestos.

A police spokesperson said: “Around 3am on Monday 8 November, officers attended at a property on Centre Street, Glasgow, following concerns for the safety and security of those using the building. Officers will continue to engage with those currently in the property.”

Just as Obama finishes his speech in the blue zone, a large crowd has gathered on the south side of King George V bridge in Glasgow for a Scientist Rebellion protest.

The group has been banned from the city centre after blocking the bridge over the weekend, when 21 activists were arrested.
“It was the first mass arrest of scientists over the climate crisis in history,” said theoretical physicist Mike Lynch-White, one of those arrested. He said the protest was the first disruptive action during the summit that wasn’t preemptively stopped by the police.

“We were banned from the centre of Glasgow even though all we were trying to do is non-violently disobey and prevent climate collapse. It’s not proportionate, it’s not reasonable,” he said. 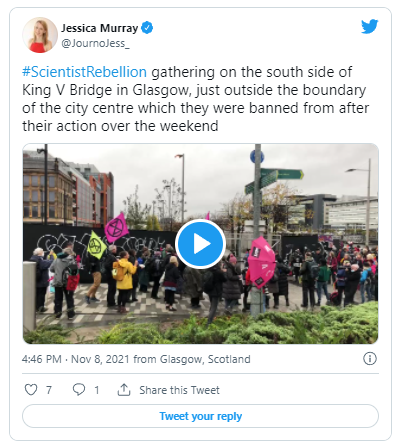 “There are people all over Glasgow right now making choices which are going to lead to enormous human suffering but it’s the people who are trying to highlight that facing restrictions and loss of freedom,” said astrophysicist Dr Tim Hewlett. “On an individual level the police have been quite decent to us, but I’m sure that’s mainly because we are wearing white [lab] coats.”

Obama enters the final stanza of his speech by saying that averting disastrous global hearing “will not be easy, it is going to be hard”, citing slow-moving governments, cynical businesses and misinformation spread on social media. “Getting people to work together on a global scale takes time and right now that’s time we don’t have,” he said.

He then launches into a plea to work with those who are indifferent to the climate crisis, or who are affected by the transition to clean energy, and asks those in the room to prepare for messy compromises.

“Gird yourself for a marathon, not a sprint,” he says, before quoting Shakespeare’s Othello: “What wound did ever heal but by degrees?

“Our planet has been wounded by our actions, those wounds won’t be healed today or tomorrow [but] I believe we can secure a better future,” he says. “We have to.

“To all the young people out there, as well as those who consider yourself young at heart, I want you to stay angry. I want you to stay frustrated. But challenge that anger and harness that frustration. Keep pushing harder and harder for more and more – because that is what is required to meet this challenge.”

Obama finishes by saying: “I’m ready for the long haul if you are, so let’s get to work.” There is rapturous applause from the audience.

“It is going to be hard,” Obama says about keeping temperatures to below 1.5C.

“International co-operation has always been difficult, it is made more difficult by misinformation and propaganda that comes out of social media these days.

“Getting people to work together on a global scale takes time, and that’s time we don’t have ... If we work hard enough for long enough, those partial victories add up.”

He is encouraging young people to speak to their families about climate change because they will listen, saying it’s important to convert people who do not agree, or are indifferent to the issue.

“We have to do a little more listening – we can’t just yell at them or say they’re ignorant, or tweet at them,” he said.

“The most important energy in this movement is coming from young people,” says Obama, who references his two daughters, both in their early 20s.

“The reason is simple – they have more stake in this fight than anyone else. That is why I want to spend the rest of my time today talking to young people.

“If those older people won’t listen, they need to get out the way,” he said.

One youth activist, Alexandria Villaseñor, said lots of young people hadn’t been able to get into the room to hear Obama speak. 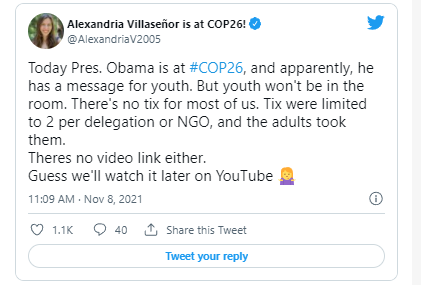 Obama criticises China and Russia for 'dangerous absence of urgency'

Barack Obama is currently addressing a very full room, opening with a cheery ‘Hello, Glasgow!’ The former US president, tieless and looking relaxed, says that he doesn’t need to attend such conferences anymore but “you will have a hard time keeping me away” when it comes to the future of the planet.

Obama says that “meaningful progress” has been made since the Paris climate accords, which he helped to strike, but acknowledges that more needs to be done.

“What is also true, collectively and individually we are still falling short,” he says. “We have not done nearly enough to address this crisis, we will need to do more.”

Obama admits that “some progress stalled” when Donald Trump withdrew the US from the Paris deal. “I wasn’t real happy about that,” he adds, but says the “US is back” under Joe Biden’s leadership.

He also believes that, despite opposition within the Democratic party, some version of Biden’s ambitious $555bn climate package will pass in Congress in the coming weeks. “It will set the United States on course to meet its new climate targets,” he says.

In 2015, rapport between Obama administration negotiators and their Chinese counterparts was seen as paving the way to the global Paris accord.

Obama criticised Chinese President Xi Jinping and Russian President Vladimir Putin for not joining other global leaders at the climate talks in Glasgow, saying he found it “particularly disappointing” that their leaders haven’t shown up to Cop26.

He blames the pandemic and the rise of nationalism for a breakdown in international relations that has affected dealing with the climate crisis. He also has a dig at Republicans back home for showing “active hostility” to climate science.”

The 44th US president admits that sometimes he feels “bleak” about the future of humanity and that “images of dystopia start creeping into my dreams”. But he called on leaders and activists not to give in to cynicism and praised the work of young climate campaigners, which provokes the first round of applause during his speech.

What happened at Cop26 – DAY FIVE at a glance

What happened at Cop26 – DAY FOUR at a glance

What happened at Cop26 – DAY THREE at a glance