Extraordinary voyage: on the trail of the trillion-tonne runaway iceberg. 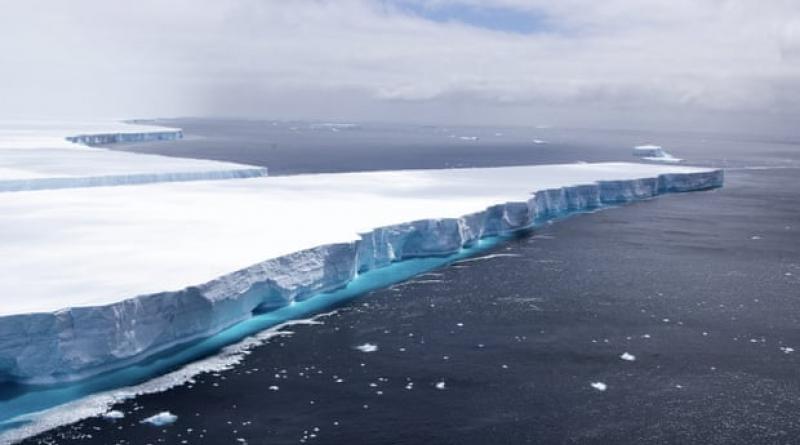 Amid fears of huge damage to marine ecosystems from the giant A68a berg, British researchers are setting sail to assess its impact.

Polar researchers will this week embark on a remarkable expedition aimed at providing crucial information about the vast iceberg, A68a, that has been spiralling northwards from Antarctica for the last year. A group from the British Antarctic Survey will sail from the Falkland Islands on Tuesday and head towards the iceberg which has been floating in waters off the island of South Georgia for several weeks.

Once on site, they will direct robot submarines to probe the water underneath the vast frozen structure and study how freshwater, melting from the iceberg, is affecting life in the ocean.

Satellite images last week revealed that A68a has now split in two and could be in its death throes. However, it still remains a threat to the surrounding ecosystem. “This iceberg is the size of a large island and the torrents of very cold freshwater emerging from it as it slowly melts could have really adverse effects on the phytoplankton in the waters off South Georgia,” Povl Abrahamsen, the expedition’s chief scientist, told the Observer last week. “And that could have very important repercussions. Essentially we have this gigantic ice cube floating in the ocean and it is cooling and freshening the water around it. 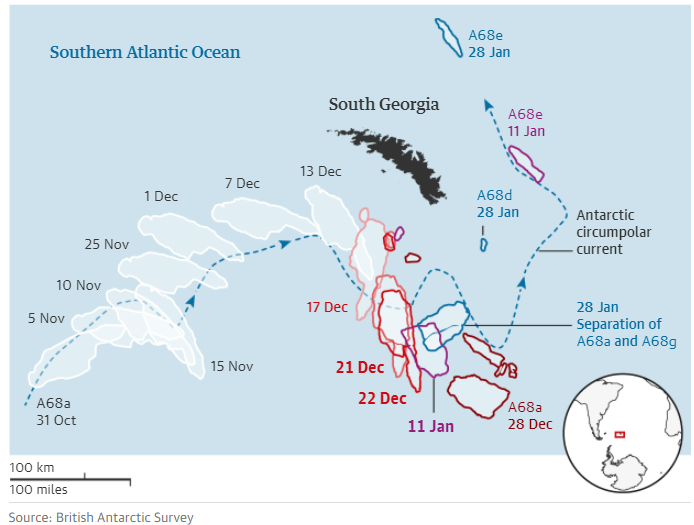 “That raises worries this could affect the base of the ocean food chain. Ecosystems in these cold regions are delicately balanced.”

Marine biologists worry that phytoplankton, microscopic marine organisms that float in the water, could be killed off. This would affect the creatures that feed on phytoplankton such as krill, a type of crustacean. In turn, this could affect populations of seals, penguins and whales which all eat krill and come to South Georgia to feed.

Studying such impacts has become vitally important in recent years, say scientists. Ice shelves at both poles are being destabilised by climate change and this is increasing the risk that more and more giant icebergs could be set loose and drift to lower latitudes – causing major disruption.

A68a is one of the largest ever icebergs identified by scientists. When it broke free from the Larsen C ice shelf in Antarctica in 2017, it had a surface area of 5,800 sq km and was twice the size of Luxembourg. Researchers reckon that it would have weighed an estimated one trillion tonnes.

For the first three years of its existence, A68a floated close to the coast of the Antarctic Peninsula. Early last year it moved northwards into open waters and began to spiral clockwise slowly towards South Georgia.

Since it began its ocean odyssey, A68a has lost about half its surface area and about two-thirds of its original volume through melting. “It’s still vast, however,” said Abrahamsen. “It is still about two- thirds of the size of South Georgia itself – which is remarkable, as it is almost four years since it calved from the Larsen ice sheet.” Late last year it was feared the iceberg was heading directly to South Georgia where it could have become grounded on the island’s shallow coastal seabed. This would have disturbed marine ecosystems and blocked feeding paths for penguins and seals.

Abrahamsen and 10 colleagues have spent the last two weeks in quarantine in the Falklands and are now ready to board the British research ship, the RRS James Cook. It is expected to set sail on Tuesday and to reach South Georgia a few days later.

“Obviously it will be far too dangerous to get too near the iceberg,” added Abrahamsen. “Instead we will rely on gliders. These are robot submarines that can adjust their buoyancy so they can study what is happening at different depths.”

Each glider is a metre and a half in length and is fitted with wings that allow the craft to glide up and down the ocean measuring variables such as temperature, salinity, and concentrations of chlorophyll. This latter variable can help gauge how much phytoplankton there is at a given depth and location – providing key data about the health of the ocean at that position. The craft navigate using GPS signals and can operate remotely for days at a time.

It will not be an easy task despite the sophistication of team’s robot helpers. “Avoiding the main iceberg will be relatively straightforward,” said Abrahamsen. “However, there could be problems with smaller bits breaking off it. Even a small iceberg can cause quite a bit of damage to a ship, so we will have to be cautious.”

After a month of gathering data from the iceberg and from other parts of the south Antarctic the James Cook will return to the Falklands.

“This region is facing a lot of changes as the climate heats up, and this is going to be an excellent chance to work out how those changes might affect us all,” said Abrahamsen. “This iceberg will give us a much better understanding of climate change impacts.”

World’s Largest Iceberg Could Collide With Island Home to Penguins and Seals.

The world's largest iceberg has just broken in two.