The Future Of US Solar Is Bright. 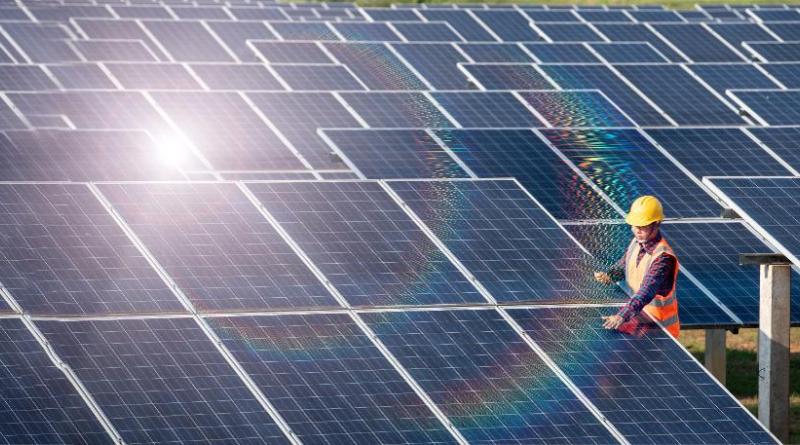 This is the first of a multi-part series on the state of the main sources of energy in the US and how they compare globally. The series will cover solar, wind, oil & gas, coal, nuclear, and geothermal (so far) and will answer the same four questions for each.

1.   How big is the US solar industry, and what is its growth trajectory?

Currently, the US solar industry employs about 242,000 people and generates tens of billions of dollars of economic value. By the end of September 2019, the US had deployed over 2 million solar PV systems, totaling about 71,300 MW of solar capacity, and generating over 100 TWh of electricity (2019 total, est.). In 2018, solar generated about 1.5% of US electricity. Of all renewable energy generation, solar PV is expected to grow the fastest from now to 2050. Some solar-heavy grids, such as the California Independent System Operator have experienced times where over half of demand was met by solar PV. 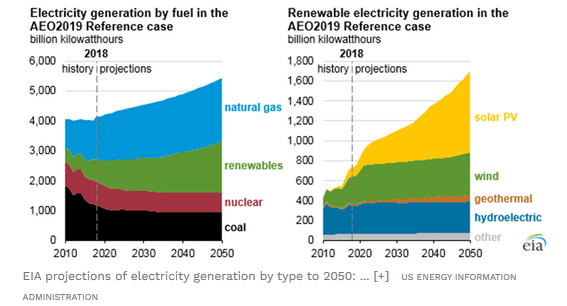 Total installed U.S. PV capacity is expected to more than double over the next five years as grid interconnection queues from California to Texas to the Mid Atlantic are full of solar projects. Thus, the US Bureau of Labor Statistics estimates that solar PV installer will be the fastest growing job between 2018 and 2028, with a median annual wage of over $42,000. 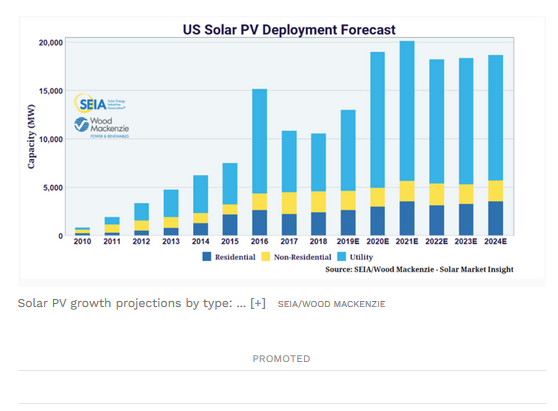 Paring solar systems with energy storage is also starting to gain traction. So far, grids have been able to absorb the variable nature of solar PV’s output and most locations can easily incorporate more still. However, the more solar that you install in one location, the more impact it can have. During sunny spring days in California, there is so much solar generation relative to electricity demand, that wholesale electricity prices can go negative. Then, only a few hours later, the grid must quickly ramp up other power plants because the solar starts to lower its output just as demand is increasing, giving us what has been called the Duck Curve. Thus, there is considerable interest in paring solar with energy storage systems to that allow the output of the solar (or any electricity really) to be saved for later.

Energy storage prices are still too high to shift bulk amounts of energy around, but there are some hybrid solar + storage projects that have been able to pencil out in the peak demand market, but peaking power plants only provide about 1% of our total energy consumed. However, as prices come down, more and more solar farms are likely to be paired with energy storage systems, like the recently greenlit 690 MW solar + storage Gemini project in Nevada.

California by far leads the nation with the most solar PV capacity with over 26,000 MW installed, almost five times more than second-place North Carolina. Over the next five years, five states (California, Texas, Florida, Nevada, and North Carolina, in order) are projected to deploy about half of all solar PV capacity in the US, with the top two states accounting for almost one-third. California’s recently enacted solar mandate for new construction should enforce a minimum of about 80,000 new solar systems (equivalent) deployed per year, often a significant cost savings over retrofits.

As of Q1 2019, the US had the capacity to manufacture about 6 GW of solar panels per year, with plans to expand to about 9 GW. The top three states for PV manufacturing (Ohio, Georgia, and New York) account for almost 60% of total US manufacturing capability.

3.   What are the biggest challenges faced by the solar sector today?

One challenge currently facing the US solar industry are the import tariffs placed on solar panels by the Trump administration. By some estimates, the tariffs have cost 62,000 jobs and lost almost $20 billion in private investment. The tariffs also have a disproportionate impact on projects in less-sunny areas and raise the levelized cost of electricity for projects by non-negatable amounts. 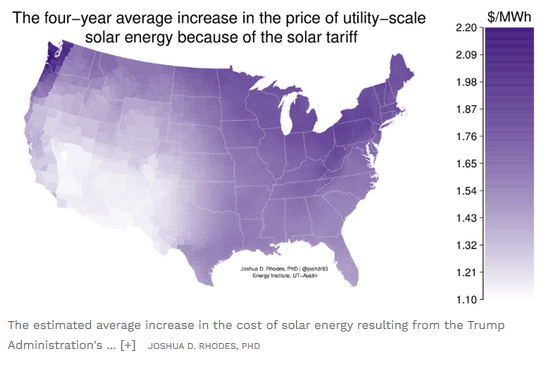 The tight job market is making it hard for solar companies, like many other industries, to grow and retain qualified workers. A recent solar industry survey found that about one-quarter of firms said it was “very difficult” to find qualified applicants for open positions.

While solar power doesn’t produce emissions while it produces electricity, there are emissions associated with the manufacture of the panels themselves, albeit much lower than fossil fuel technologies. The production of solar panels does typically involve the use of industrial chemicals that must be cleaned up.

The rapid increase of solar deployment in the US will be followed by a rapid increase in the need for end of life solutions in 25-30 years. Whether that is recycling, as some manufactures have starting implementing, or second life uses, the industry will need to scale those solutions as fast as we are scaling deployment today.

4.   How does the US solar sector compare globally?

Ever-changing numbers are hard to pin down, but as of the end of 2018, the US ranked second in terms of solar PV deployments behind China. Estimates for global PV growth are expected to exceed 100 GW/yr from 2019 on and more than triple that by 2050, with the US/North America responsible for about 20% of total deployment. 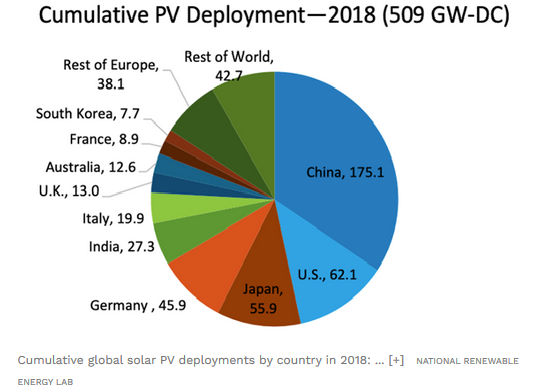 All in all, the future of solar is… bright. Most major electricity grid studies show solar expanding significantly (even without specific mandates) as costs decline and societies use their values to drive their energy choices. These study results are being validated in real life as competitive electricity grids find their interconnection queues full of solar projects and new announcements are frequent.

COP25: Michael Bloomberg at the "WE ARE STILL IN" USA Pavilion supporting Climate Talks.