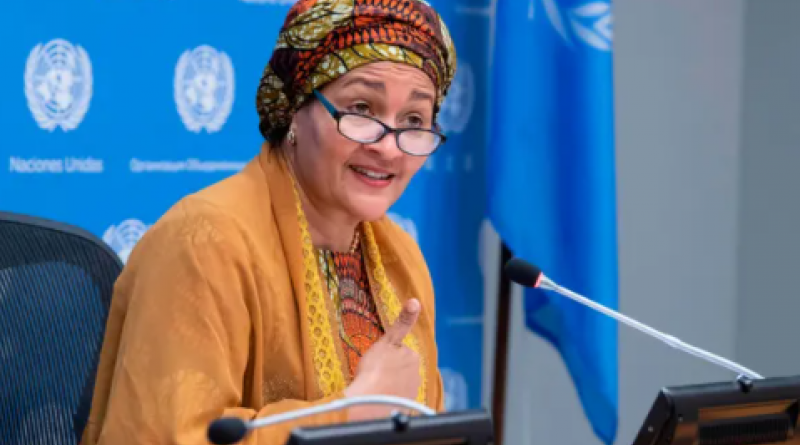 The world’s richest G7 group of countries must double the amount of finance they are offering to poor countries to help them cut greenhouse gas emissions and cope with the impacts of climate breakdown to make vital climate talks this year a success, the UN has said.

As part of that commitment, the G7 countries should meet their targets of providing 0.7% of their GDP in overseas aid, said Amina Mohammed, deputy secretary general of the UN.

Speaking at a conference of ministers held online on Wednesday by the UK, which is hosting the Cop26 UN climate summit this November in Glasgow, she said finance would be key to success at the talks.

She said: “We now need to spare no effort to achieve [the goals of the Paris climate agreement] in this make-or-break year … [But] we cannot deliver a decade of transformation [needed to tackle the climate emergency] when so many developing countries face crushing levels of debt.”

The UK will also host the annual meeting of the G7 group of industrialised nations this summer. Mohammed said this dual role presented “a unique opportunity … to secure the breakthrough” needed on financial help for poor countries.

Dominic Raab, the UK’s foreign secretary, told the conference of ministers: “We know that the lack of finance creates barriers to countries implementing the Paris agreement … Here in the UK we’re doing our bit, we’re responding. We have committed £11.6bn over the next five years in climate finance. And, through our presidencies of Cop26 but also the G7, we are urging others to try and follow the example we set and galvanise that international action that’s so necessary to tackle this challenge.”

However, the UK will face an uphill struggle in convincing many donor countries to come up with stronger pledges on climate finance. The UK’s overseas aid budget is being cut from 0.7% of GDP to 0.5%, damaging assistance programmes across the world. Although the money earmarked for climate projects is ringfenced, and at £11.6bn from 2021 to 2025 represents a doubling of previous commitments, many observers of the climate talks are concerned at the signal the cut sends.

Save the Children has estimated that about £691m will be cut from the UK’s aid budget to countries among the most vulnerable to climate breakdown, including Afghanistan, Bangladesh, the Democratic Republic of the Congo and Yemen.

Kevin Watkins, chief executive of the charity, said: “The UK’s broken promises on aid make a mockery of the government’s claim to leadership ahead of the [Cop26] climate summit. No other G7 country is cutting aid. The UK should be stepping up to protect children facing the disastrous impacts of climate change. Instead, it is stepping down and turning its back on children who will be among the worst affected by the climate crisis, and for whom we should be doing more, not less.”

Emmanuel Guérin, executive director international at the European Climate Foundation, said the UK’s cut in overseas aid was a serious problem in the Cop26 talks. “You can’t say it does not have an impact – it does,” he said. “People are looking at this. It is not putting the UK in an easy situation.”

The conference heard from countries where climate breakdown was already bringing hardship. But, in many of the most vulnerable areas, governments are facing increased difficulties from the Covid crisis, the economic consequences of which are adding to the costs of servicing debt.

Rich countries pledged in 2009 to ensure at least $100bn a year in climate finance was provided, from public and private sources, to other nations by 2020. However, that target has been missed and countries are under pressure to show that it will be met soon, and the target increased to the higher levels now needed.

Jonathan Farr, senior policy analyst at the charity WaterAid, said: “Vulnerable communities are living with the impact of the climate crisis now, through flooding, longer droughts, rising sea levels, and other extreme weather events. This is threatening to wipe out any progress towards a better life made over the last few decades unless communities get support to protect their lives. [Rich] countries must deliver on their promises.”

Jennifer Larbie, UK advocacy and policy lead at the charity Christian Aid, said: “If the UK is going to be a credible leader on climate and an effective host of Cop26, it needs to restore the aid budget, ensure that unpayable debts are cancelled and commit the finance needed to help poorer nations adapt to a changing climate.”