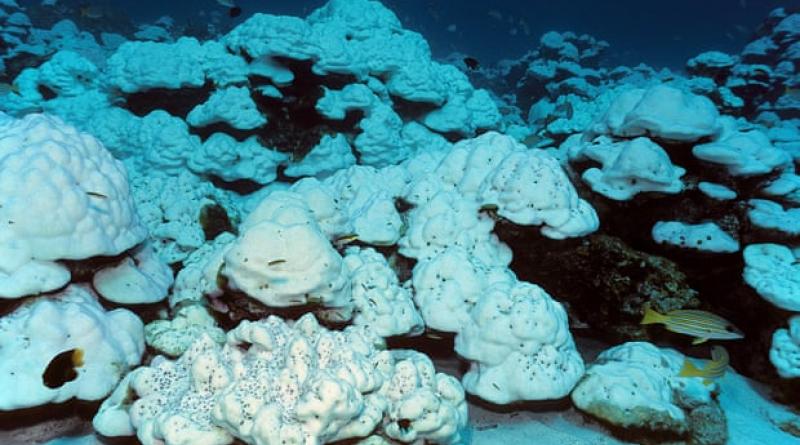 The Great Barrier Reef could be heading for a third major coral bleaching outbreak in the space of five years if high ocean temperatures in the region do not drop in the next two weeks, scientists and conservationists have warned.

Heat stress is already building across the world’s biggest reef system, with reports of patchy bleaching already occurring. But a major widespread event is not currently taking place.

“We are down to the wire,” said Prof Terry Hughes, director of the ARC Centre of Excellence for Coral Reef Studies at James Cook University.

The Great Barrier Reef Marine Park Authority is closely monitoring conditions. Areas of heat stress are spreading, particularly across the central and southern areas that are popular with tourists.

Sea surface temperatures (SST) are already more than 1.5C above average across large areas of the reef, with a month remaining until temperatures usually peak.

Across about two thirds of the reef – from Port Douglas south – SST were between 2C and 3C above average.

Coral bleaching is a stress reaction caused when corals spend long periods in warmer than average water. The algae that provides food and the coral’s colour separates from the animal.

Severe bleaching can kill some corals, and weaken others. As well as bleaching, corals can die from more immediate heat stress if temperatures become extreme.

Rising ocean temperatures are caused by increasing levels of greenhouse gases in the atmosphere.

Hughes told Guardian Australia: “We are worried about the level of heat that’s out there now, with four weeks still to go until we get the peak of summer temperatures. That’s usually around mid-March.

“So with about a month to go, the pattern so far is following in the footsteps of 2016-17 and it’s already hotter than it was in the interim years.

“If it happens or not will depend on the vagaries of the weather for the next two weeks.” 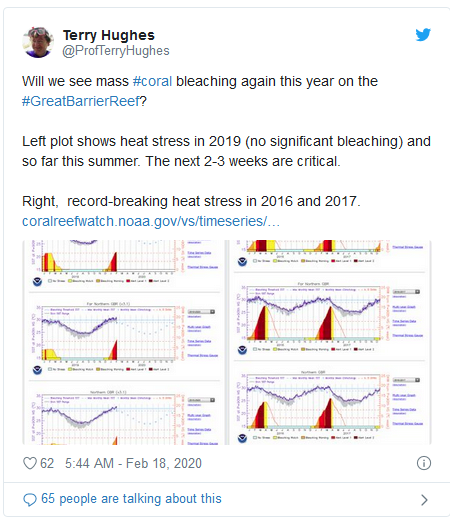 He said if current sea surface temperatures remained, “then we are likely to get bleaching and, if they get hotter still, we will get severe bleaching.”

Northern sections of the reef are forecast to cool, but Bureau of Meteorology forecasts do not suggest temperatures will fall across much of the central and southern regions.

Another major bleaching event would be a further blow to tourism in the reef region.

Hughes said it was predicted to get cooler in the northern parts of the reef over the next week, but for the rest of the reef it was “probably 10 days too early to be sure” of another widespread bleaching event.

Hughes has carried out extensive aerial surveys during previous bleaching events to record the scale and severity of bleaching.

“I’m on standby to do those aerial surveys if it’s needed, but hopefully it won’t be.”

About half the reef’s corals died in back-to-back bleaching events in the summers of 2016 and 2017.

In August 2019, the Great Barrier Reef Marine Park Authority downgraded the reef’s longterm outlook from “poor” to “very poor” for the first time.

In December 2019, the Queensland and federal governments sent a report to Unesco on the reef’s status, admitting that climate change had already impacted the values that led to a world heritage listing in 1981.

The environment minister, Sussan Ley, said there were anecdotal reports of isolated bleaching but the “forecast weather pattern remains concerning.”

She said she had spoken with the Great Barrier Reef Marine Park Authority’s chief scientist, Dr David Wachenfeld, about the concerns.

In an update published on Thursday afternoon, Wachenfeld said the forecasts were “not good for bleaching conditions on the reef”.

Richard Leck, head of oceans at WWF-Australia, said: “The Great Barrier Reef is on a knife edge. We will know in the next couple of weeks whether we now have a mass coral bleaching event for the third time in only five years.

“Surely after this summer of bushfires, and this marine heatwave hitting the reef, we cannot keep burying our heads in the sand. We need a reef-safe climate policy that’s consistent with a 1.5C global warming target, or less. No more excuses will be tolerated.”

Shani Tager, the Australian Marine Conservation Society’s Great Barrier Reef campaigner, said: “The last thing our reef, and the coastal communities that it supports, needs right now is another summer of mass bleaching.

“Unfortunately we are a whisker away from bleaching disaster yet again because of global warming-driven marine heatwaves.”

The World Heritage Committee is scheduled to review the status of the Great Barrier Reef at a meeting in June in China, with the potential to place the reef on its “in danger” list.