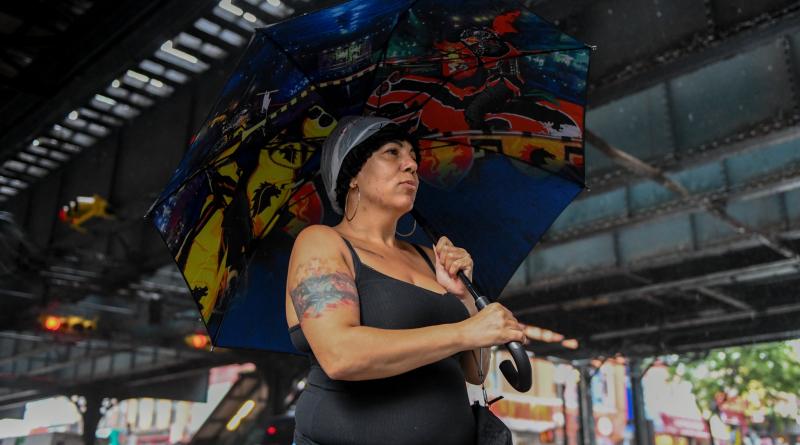 Two thirds of the United States is expected to bake under what could be record high temperatures heading into the weekend. As a result, government agencies have issued warnings that can feel ominous.

But people with health issues, older people and young children are especially susceptible to the effects of extreme heat. It’s a threat that grows as climate change continues.

To understand how climate change increases the frequency of heat waves, it helps to think of the Earth’s temperature as a bell curve said Michael Mann, the director of the Penn State Earth System Science Center.

“So you know, a warming of 1 degree Celsius, which is what we’ve seen thus far, can lead to a 10-fold increase in the frequency of 100 degree days in New York City for example,” said Dr. Mann. According to the U.S. Global Change Research Program, since the 1960s the average number of heat waves — defined as two or more consecutive days where daily lows exceeded historical July and August temperatures — in 50 major American cities has tripled.

The program used historic lows because the most serious impacts of extreme heat tend to come when nighttime temperatures don’t cool off. By the 2010s, the average number of heat waves had risen from an average of two per year in the 1960s to the current average of nearly six per year.

There’s another way that climate change worsens heat waves: by changing the jet stream. Those air currents in the atmosphere help move weather systems around and are driven by temperature differences, which are shrinking. So when heat waves arrive, they stay in place longer.

At the same time, under certain circumstances the jet stream can get “stuck” between an atmospheric wall in the subtropics, and at the Arctic, trapping weather systems in place.

“That’s when you get these record breaking weather events," said Dr. Mann, “either the unprecedented heat wave and drought, to wildfires and floods.”

Nationwide, the time period in which heat waves might be expected to occur is 45 days longer than it was in the 1960s, according to the U.S. Global Change Research Program.

According to the Centers for Disease Control and Prevention, which uses methods most in accordance with global standards, currently, cold weather kills more people than hot weather does.

Want climate news in your inbox? Sign up here for Climate Fwd:, our email newsletter.

It’s important to note that not everyone suffers equally when temperatures soar. In addition to the vulnerable groups, like elderly people, it also matters where you live. Researchers at the University of California, Berkeley, analyzed data from the 2000 census and found that people of color were up to 52 percent more likely to live in the hottest parts of cities.

Similarly, Eric Klinenberg, the director of the Institute for Public Knowledge at New York University, found that during the 1995 Chicago heat wave that killed more than 700 people, the death tolls were highest in places that were not just poor and segregated, but what he calls “institutionally depleted.”

“In a heat wave and many climate events, it’s social isolation that proves to be truly dangerous,” he said. “If you’re home and alone in a heat wave when you’re old and frail you’re more likely to die if you don’t have air conditioning.”

If we don’t, he said, “think about the most extreme summer heat you’ve ever experienced in your lifetime. That will become a typical summer day by the middle of this century, if we continue on the path that we’re on.”

Kendra Pierre-Louis is a reporter on the climate team. Before joining The Times in 2017, she covered science and the environment for Popular Science. @kendrawrites