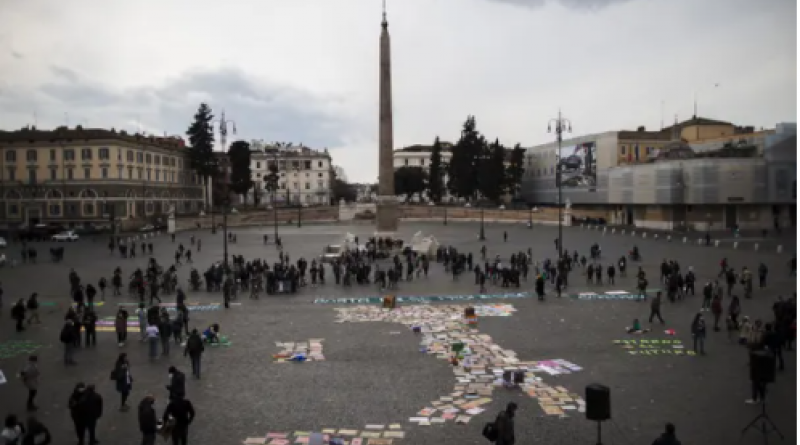 Environment campaigners in Italy are suing the government for failing to sufficiently tackle the climate crisis in what is the first legal action of its kind in the country.

The 203 plaintiffs will submit their lawsuit to Rome’s civil court on Saturday. They want the court to order the government, led by the prime minister, Mario Draghi, to adopt more ambitious climate change policies as well as significantly increase its carbon emissions reduction target.

“We are asking the court to recognise that the Italian government is not complying with respect to its obligation to protect the population from climatic change,” said Marica Di Pierri, a spokesperson for the environmental organisation A Sud, and its affiliated Giudizio Universale (Last Judgment) campaign. “We also want the court to order Italy to set an emissions-reduction target for 2030 that is three times what it is today.”

The plaintiffs, among them environmental associations, Italian citizens, foreign residents and young activists with the Italy wing of the Fridays for Future activist group, argue that successive governments have failed to seriously address the climate crisis despite the country being vulnerable to extreme weather events.

Di Pierri said: “Italy is not a virtuous example when it comes to environmental policies … We are still heavily focused on the exploitation of fossil fuel sources and incinerate a lot of rubbish instead of developing recycling systems. Public transport is insufficient – for example, in cities such as Rome, cars are still the main way to get to work as there’s not much choice.”

Pledging to put the environment at the top of the agenda of his government, Draghi established a ministry for “ecological transition” after being appointed prime minister in February. About €59bn (£51bn) of the more than €200bn Italy is poised to receive from the EU’s post-pandemic economic recovery fund has been allocated for investment in green initiatives. The ecological transition minister, Roberto Cingolani, said in May that one of the first tasks would be cutting the bureaucracy that hampers renewable energy projects, with the aim of Italy becoming “carbon free” by 2050.

However, campaigners say the ecological objectives outlined in Italy’s recovery plan, which was submitted to the European commission in late April, are not ambitious enough.

“We were disappointed with the plan as we didn’t really see a real change,” said Di Pierri. “There is a big narrative but, at the moment, it is not translating into concrete political strategy.”