‘It’s critical the message makes it to the mainstream’: Nasa climate scientist speaks on his tearful protest 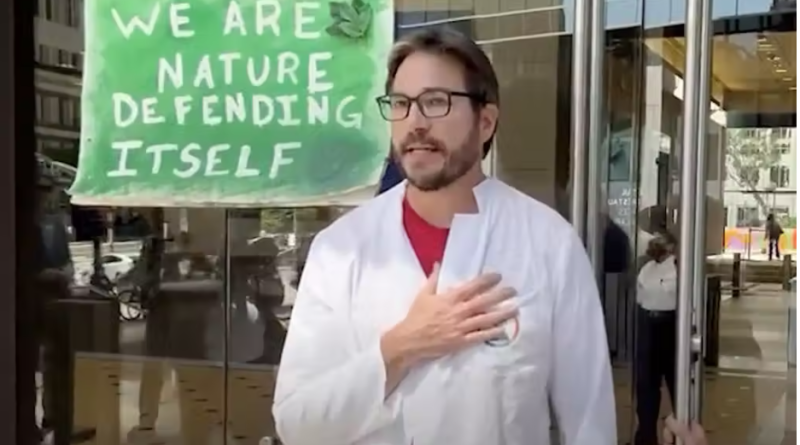 Peter Kalmus was among a group of scientists who chained themselves to a JPMorgan Chase building in Los Angeles in protest of the bank’s financing of fossil fuels. Tap to watch the video

A Nasa scientist who went viral over his tearful protest on the climate crisis has told The Independent that his activism comes from a sense of desperation to “find something that actually has an impact and moves the needle”.

Peter Kalmus was among a group of scientists arrested last week after they chained themselves to a JPMorgan Chase building in Los Angeles in protest of the bank’s financing of fossil fuels.

A video showed the scientist breaking down in tears and pleading with people to listen to urgent climate warnings. “We’re going to lose everything,” he said. “And we’re not joking, we’re not lying, we’re not exaggerating.”

Dr Kalmus, who spoke to The Independent on his own behalf and not as an employee of Nasa, is also an author and has more than 220,000 followers on Twitter. But despite his significant platform to speak on the climate crisis, he described it as an “echo chamber”.

“I think it’s critical for the message of climate urgency to make its way out into the mainstream,” he said, in a phone interview.

Civil disobedience feels like a way to emphasize the seriousness of his convictions, he said, using the analogy of a home catching fire while a family is eating breakfast.

If you casually mention that the house is on fire before returning to your coffee, he noted, “they’ll think you’re joking, they won’t take you seriously”.

Dr Kalmus says that he wants the public to understand the climate crisis is an emergency caused primarily by burning fossil fuels – and that he wants leaders to stop claiming to listen to scientists, and actually do so.

“Every day that we continue to expand the fossil fuel industry and add more greenhouse gases into the atmosphere is going to lock in additional levels of heating in the future,” he says.

“And that means additional levels of death and suffering. So that’s what the stakes are.”

The LA protest was part of a wave of action organised by Scientist Rebellion, a global movement of scientists who engage in civil disobedience to highlight the climate crisis.

The demonstrations took place in the wake of the latest report from the United Nations’ Intergovernmental Panel on Climate Change which warned we are “firmly on track toward an unlivable world” if global greenhouse gas emissions don’t peak by 2025, at the latest.

In Madrid, protesters threw red paint over the Spanish National Congress. Scientists also protested at the Ministry of Environment in Quito, Ecuador, and at the Climate Ministry in Copenhagen. In total more than 1,000 Scientist Rebellion activists in 25 countries including Rwanda, Sierra Leone, Colombia, Malawi, Germany, Italy, and the UK took part in non-violent actions with many risking arrest.

Dr Kalmus says that while he doesn’t have any specific plans for future protests, taking part in climate civil disobedience makes him feel hopeful.

“I feel like I’m actually, finally, starting to be heard – probably, really, for the first time,” he says.

Dear politicians, young climate activists are not abuse victims, we are children who read news