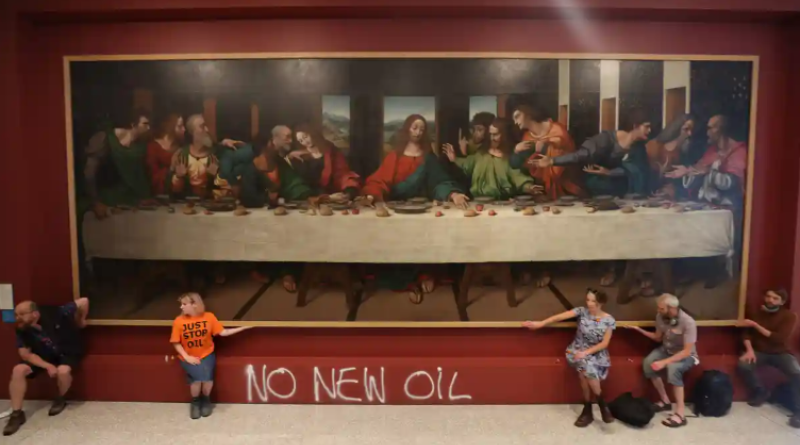 Five supporters of the Just Stop Oil coalition have glued themselves to a 500-year-old depiction of The Last Supper in London’s Royal Academy, the fifth time in a week that it has disrupted a major British art institution.

The activists struck just before noon, supergluing their hands to the frame of the 3-metre-long painting – a reproduction of the Leonardo da Vinci original attributed to his pupil, Giampietrino.

The Royal Academy’s Last Supper is a nearly full-size copy of the famous fresco in the refectory of Santa Maria delle Grazie in Milan. It presents the famous scene from the Gospel of John in which Jesus announces that one of his 12 apostles will betray him.

In keeping with the gospel theme, one of the protesters said the government was a “Judas” to future generations, PA Media reported. The protester said the group had brought its campaign to this “magnificent, beautiful painting” because the future is “bleaker than ever”.

Jessica Agar, a 21-year-old student from Hereford at the protest, said: “I am an art student, but there is no place for me to follow my calling as an artist in a world where I have no future. In no uncertain terms, the establishment – of which the Royal Academy is a part – has condemned me and all young people to suffer. I am outraged, and you should be too.”

One campaigner spray-painted “No new oil”on a plinth beneath the painting. The Guardian understands art gallery actions were intended as a way to keep attention on the group’s cause before more protests in coming weeks and months. The campaign began in April with blockades of oil distribution terminals in the Midlands and south-east England.

Officers were called to the scene, and five people have been arrested on suspicion of criminal damage. They are still in custody.

On Monday, campaign supporters glued themselves to a John Constable painting, The Hay Wain, at the National Gallery in central London. Last week three other paintings, including one by Vincent van Gogh, were targeted at galleries in London, Manchester and Glasgow. The protesters arrested during these events are also still in custody.

On Sunday, seven people were arrested after activists invaded the race track during the opening lap of the British Grand Prix.

Just Stop Oil: Activists says they have 'a duty to protest'

The Tories are going all out to shut down protest. Just Stop Oil activists like me will not be deterred