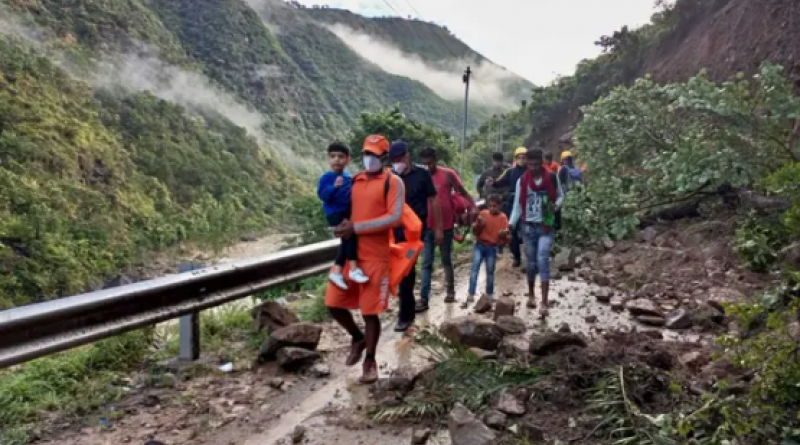 More than 150 people have died in devastating floods across India and Nepal, after some of the heaviest rainfall in over a century triggered flash flooding and landslides.

In the north Indian state of Uttarakhand, at least 46 people died and 11 were missing after record-breaking rainfall caused by cloudbursts, an intense deluge of rain, on Monday and Tuesday.

Neighbouring Nepal was also badly affected by the extreme rainfall, which caused landslides in rural areas and washed away homes, roads and bridges. So far, 77 people have been found dead and dozens are still missing, with disaster officials warning that the death toll was likely to rise as many affected areas remained unreachable.

In the south Indian state of Kerala, the death toll rose to 39 on Wednesday after extreme weather over the weekend battered the region, causing devastating damage and floods.

Uttarakhand’s picturesque Kumaon region was particularly badly hit by flooding that washed away homes and vehicles. The army and the national defence force were dispatched to the Himalayan state to help with rescue efforts as residents and tourists were left stranded and dozens of trekkers hiking in the mountains had to be rescued. Many districts remained cut off after roads were blocked with mud and debris. The Ganges burst its banks in the holy city of Rishikesh.

Nainital, a district in Uttarakhand, received 340mm (13.4in) of rainfall over 24 hours on Tuesday, the highest registered since a weather station was set up there in 1897. Nainital’s famous lake overflowed, causing flash flooding and cutting off the area entirely.

The river flooding also affected the periphery of Jim Corbett national park, which is home to tigers and elephants. A video that went viral showed a distressed elephant stranded on a small island in the middle of the overflowing Gaula river. According to wildlife park officials, the elephant managed to successfully swim to safety through the fast-flowing waters.

Heavy rain in October is highly unusual in India and Nepal, as the monsoons have usually departed the region. However, this year the monsoon in India was delayed, meaning the rains have continued for weeks longer than normal, triggering unusual weather events.

The extreme weather in north India and Nepal was caused by a disturbance that originated in the Mediterranean and then slammed into the Himalayan mountains, leading to heavy rain spells and cloudbursts.

In both Nepal and India, authorities warned there would be more heavy rainfall to come later this week. So far in October, Uttarakhand has received 485% more rain than average, according to India Meteorological Department data, while Kerala’s average rainfall was up by 135% on the average, leading to several dams being opened after they reached capacity.

The extreme weather has been attributed to the climate crisis. Uttarakhand has experienced a sharp increase in heavy rainfall events and cloudbursts, reporting more than 7,750 since 2015, while Kerala has experienced severe flooding multiple times over the past three years.

Experts say that in states such as Uttarkhand, the problems are exacerbated by intense development of the mountain region, including the construction of dams and roads in the fragile Himalayas. These vast projects often encroach on rivers, destabilising the mountains and making the region more prone to extreme weather events.

Population growth in the mountain areas, which has led to houses being built in hilly areas and forests cut down across the state, has also been blamed for exacerbating landslides when heavy rains fall.