Malawi's landscape is clogged with plastic waste that could linger for 100 years. One woman has taken on plastic companies and won 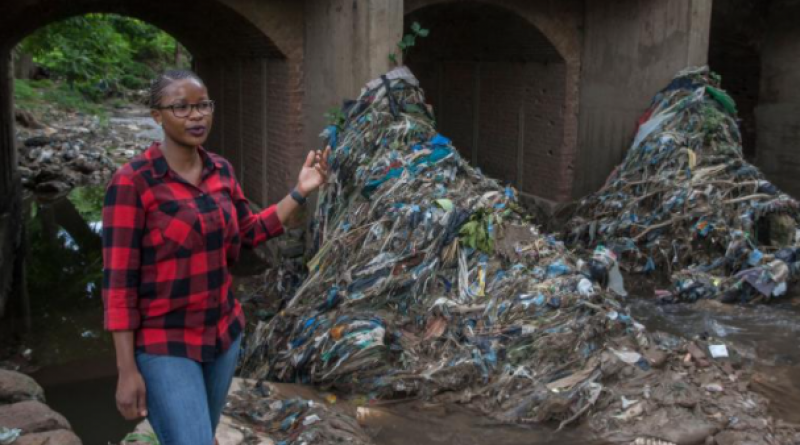 For more than five years, Gloria Majiga-Kamoto, a 30-year-old Malawian environmental activist, has waged a David v Goliath battle against some of the country's largest plastic manufacturers to bring an end to single-use plastics.

Together with other activists and civil society groups, Majiga-Kamoto spearheaded a grassroots campaign that fought to pressure authorities into instituting a plastic ban in Malawi.

"We organized several marches — marched to the court and in communities to document their experiences and the challenges they encountered because of the plastic problem we have in the country," Majiga-Kamoto told CNN.

After a protracted legal battle with plastic manufacturers, the Malawi Supreme Court upheld a national ban on the production, importation, distribution, and use of thin plastics in July 2019.

Majiga-Kamoto's fierce advocacy led to the shutting down of three plastic firms in 2020 by the Malawian government and as a result of her grassroots campaign, she has been awarded the prestigious Goldman Environmental Prize for Africa.

She is one of six global winners of the prestigious award, announced Tuesday morning, which honors grassroots environmental activists.

But the mother-of-one says her advocacy journey has sometimes taken a toll.

"You sometimes put your family at risk coming up against huge companies and people that are well connected politically. You always find there's a conflict of interest and you're stuck in the middle. It does feel a bit threatening and can also feel a bit scary," she told CNN.

An estimated 75,000 tons of plastic are produced in Malawi each year, a recent study commissioned by the government found, and at least 80% of those plastics are discarded after use, according to the study.

Malawi's plastic waste will require more than 100 years to decompose, but sustained manufacturing of throwaway plastics may lengthen this projection.

"Should production and distribution continue, chances are high that we will reach a crisis level," Yanira Ntupanyama, the principal secretary at Malawi's Ministry of Forestry and Natural Resources told CNN.

The findings of the government study also found that the East African nation produces more plastic waste per capita than any other country in sub-Saharan Africa — and this has greatly overwhelmed its waste disposal systems.

Majiga-Kamoto says she was spurred on to go against the plastic manufacturers after seeing how farmers and livestock were struggling with plastic pollution.

"It became very personal for me after interacting with farmers," she says. "Some of them are losing their livestock because once the animals get into the field, which is so heavily polluted with single-use plastic, they consume these plastics, which kill them, thereby affecting the livelihood of their owners," she said.

In Mponela town, in Malawi's Central region, Majiga-Kamoto says around 40% of slaughtered livestock in the area were found to have ingested plastic fragments.

Nearly 80% of Malawi's plastic waste ends up in garbage dumps and natural surroundings, as the government study shows it may take more than 400 years for some plastics to decay.

Malawi's environment has also been adversely affected by plastic litter. Sanitation experts have blamed the "poor handling" of plastic waste in Malawi's capital, Lilongwe, for dangerous flooding, which has displaced thousands of people in the city."

"It is a problem. Plastics don't decay in the environment and may stay over 100 years... It's a nuisance to the environment; blocks drainage system[s], offers habitat for multiplication of disease-causing organisms and kills livestock when ingested," Ntupanyama told CNN.

Plastic ingestion poses an even greater threat to marine life. According to UNESCO figures on marine pollution, plastic fragments kill more than a million seabirds yearly, and at least 100,000 marine mammals.

"A lot of plastic wastes that we are generating end up at open dumpsites and they slide right back into the communities, causing pollution in our streams and landscape," Majiga-Kamoto said.

The ban on thin plastics applies to plastics equal to or less than 60 microns in thickness—the equivalent of the thickness of plastic bags used in grocery stores for fruits and vegetables—and includes bags, sheeting, and packaging.

However, enforcement has been difficult as it was swiftly challenged by an association of plastic manufacturers, government officials said.

The manufacturers argued that restrictions imposed on the production of thin plastics would affect jobs and create an economic instability in the country.

"Right from the beginning of the ban, plastic manufacturers were against the implementation of the regulations," Ntupanyama said.

The group of plastic companies took the government to the High Court in 2016, which ruled in their favor. Three years later, the case then went to the Supreme Court, where the government won their fight.

However, implementation of the policy has stalled due to protracted litigation on the matter, said Ntupanyama.

Ntupanyama added that the government has plans to review the regulations "so that we have a complete ban of plastics in Malawi."

CNN was unable to reach the association of plastic producers ahead of publication.

According to Plastic Waste Makers Index, more than 130 million metric tons of single-use plastics were disposed of globally in 2019 — most of which were either burned, buried in landfill, or discarded directly into the environment.

The manufacturing of single-use plastics is expected to rise by 30% worldwide in the next five years.

To tackle plastic pollution, 170 countries have agreed to "significantly reduce the use of throwaway plastics" by 2030, according to the United Nations Environment Programme.

"Malawi is very far behind. Recycling of waste requires technology and we do not have a lot of that technology," she said.

Beyond government action, Majiga-Kamoto believes that Malawians have a crucial role to play.

"Plastic is quite a useful innovation, but the challenge is that we are using it unsustainably," she told CNN.

"Individuals have to be aware of their own contribution to the mess. Malawians should make it easier for plastics to end up in the right place and to be potentially recycled," she said.

Africa’s plastics bans are pitting the environment against the economy.