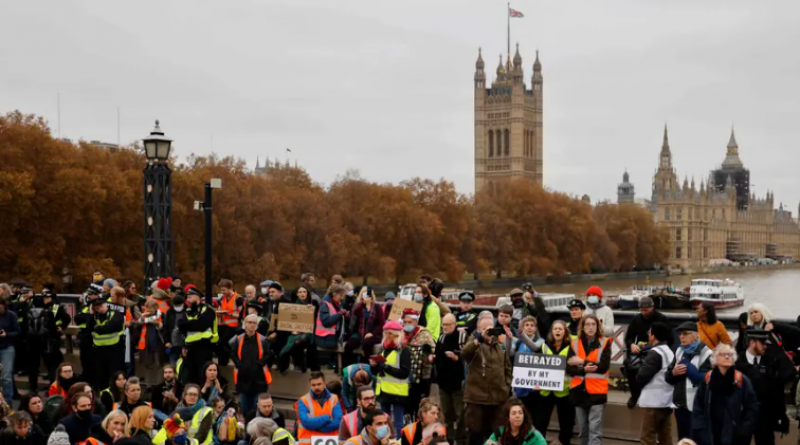 Police have arrested 120 people in the past week after climate activists blocked major bridges linking central and south London, including Lambeth and Vauxhall bridges, to stage sit-in protests.

The bridges were closed to traffic for hours on Saturday due to the protests. Activists raised placards reading “betrayed by my government” and “COP has failed” during the demonstrations.

The Metropolitan Police said that the majority of those arrested have been released after investigation, and thanked the public for “their patience while officers worked to remove the groups”.

The protests were held to express support for the nine Insulate Britain activists who were jailed earlier this week for breaching an injunction designed to prevent road blockades.

Insulate Britain have become increasingly active since the summer, blocking busy roads – including motorways – to demand action from the government on home insulation and domestic energy waste. Several protests have been carried out this month, with activists gluing themselves to roads outside parliament and blocking major roads in Manchester, Birmingham and Hertfordshire.

A High Court injunction was handed down at the request of National Highways in September, which banned the protest group from obstructing traffic and preventing access to 4,300 miles of major A roads and motorways across the country.

Nine activists were jailed on Wednesday after they admitted to breaching the injunction by blocking a junction of M25 during the morning rush hour on 8 October. Eight were sent to prison for three or four months, while the ninth, Ben Taylor, was given a six-month sentence after a judge said his submissions to court were “inflammatory”.

Liam Norton, a spokesperson for Insulate Britain, on Saturday denied reports that the group’s protests had stopped ambulances from getting to hospitals.

Defending the group’s actions, he said it is “what’s required in order to create change in our system to protect every single person in this country”.

The government has responded by seeking court injunctions to prevent the protests. So far four have been issued, relating to major national highways, the M25, roads around the Port of Dover and key roads in London administered by Transport for London.

Those defying the injunctions can face charges for contempt of court and face prison sentences up to two years or a fine.

'This is a circus': a day at Cop26 with a climate activist – video