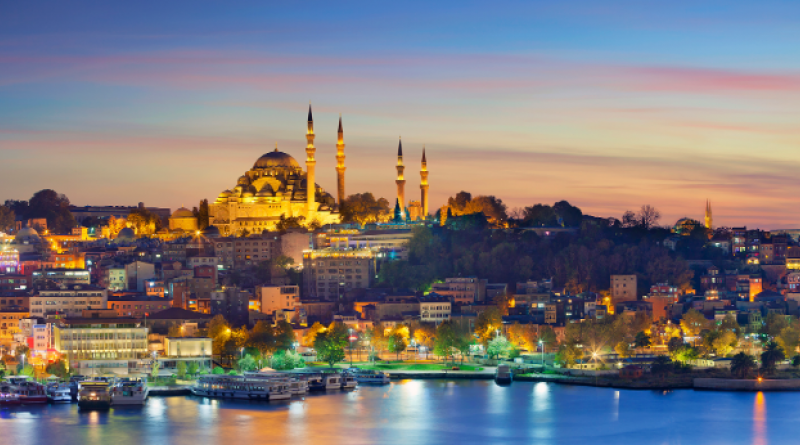 Turkey is the fastest growing OECD economy with rapidly increasing greenhouse gas emissions. Since 2008, its economic growth has been relatively decoupled from air emissions, energy use, waste generation and water consumption.

However, the high resource intensity of Turkey’s economy and its heavy reliance on fossil fuels will continue to increase these environmental pressures in absolute terms. More progress is needed in the transition to a low-carbon, circular economy to improve the country’s environmental performance.

The OECD’s third Environmental Performance Review of Turkey notes that the country remains heavily reliant on coal, oil and gas and that, while investment incentives have helped to double the use of renewable energy in a decade, fast-rising energy demand from economic growth and higher incomes means the energy mix has remained stable at 88% fossil fuels to 12% renewables.

Turkey’s greenhouse gas emissions rose by 49% over 2005-16 compared with a drop of 8% across the OECD area over that period.

While Turkey signed the 2015 Paris Agreement, it is one of only a handful of countries yet to ratify the global accord on curbing climate change.

It is also the only OECD country without a climate mitigation pledge for 2020. 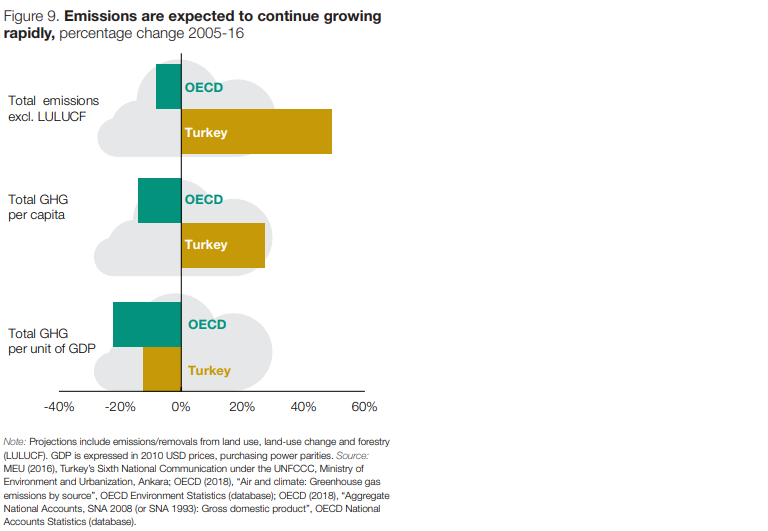 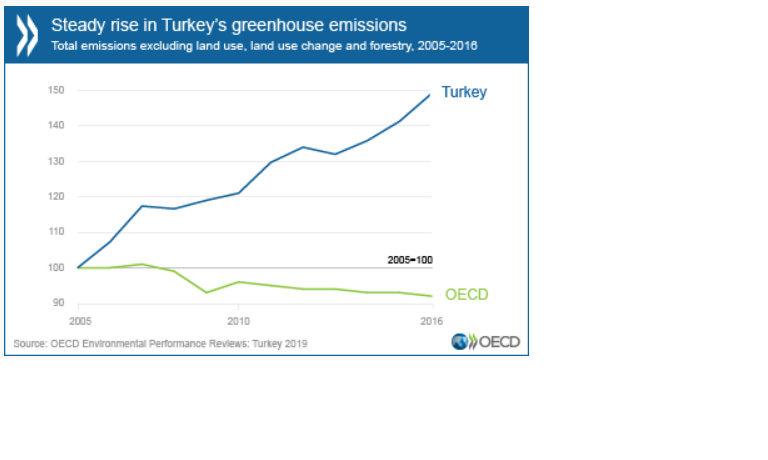 “Turkey has made a good start on shifting to cleaner energy but needs to step up its efforts and increase investment in geothermal, solar and wind power,” said OECD Environment Director Rodolfo Lacy. “Setting objectives for energy efficiency should also be a priority.”

Turkey has increasingly aligned its environmental regulations with EU standards, but needs to improve their implementation and enforcement.

The Review praises Turkey’s use of environmental taxes, particularly its high tax rates on gasoline and diesel, but notes that the system includes incentives for consumers to buy used vehicles, which tend to be older and have higher emissions. It also calls for the gradual removal of fossil fuel subsidies as a way to promote cleaner energy and transport options.

Cleaner energy and transport would also help reduce air pollution. Turkey’s reliance on coal-fired power plants means that air quality in large cities and industrialised regions falls short of World Health Organisation guidelines. In terms of other environmental pressures, the Review finds that Turkey has made good progress in expanding waste water treatment facilities as it grapples with poor surface water quality, yet challenges remain for municipal waste, 90% of which is still landfilled compared with an OECD average of 42%.

Recommendations in the Review include that Turkey:

For further information, or to arrange an interview with the author, journalists should contact the OECD Media Office (+33 1 45 24 97 00).

Working with over 100 countries, the OECD is a global policy forum that promotes policies to improve the economic and social well-being of people around the world.