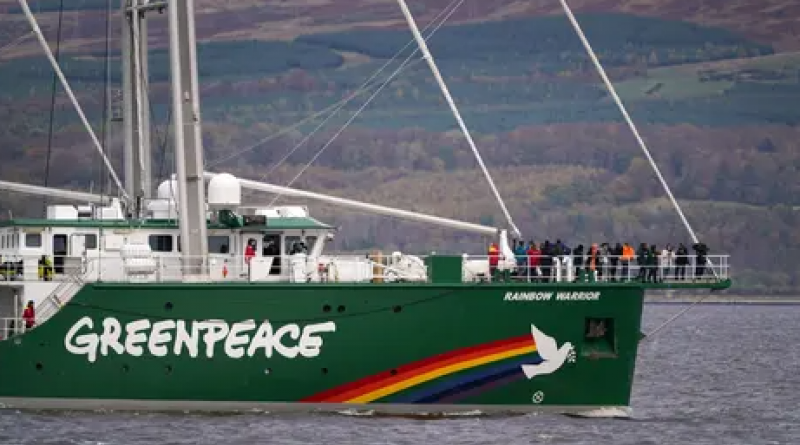 The Rainbow Warrior has brought us to Cop26 to speak up for the sidelined citizens of the global south. We can’t be ignored

How can you hold climate talks without including the most affected people? You can’t. How can you make decisions on the best way to adapt to climate impacts without talking to those forced to adapt? You can’t. And how can you deliver climate justice by continuing to ignore those that are suffering the most? You can’t.

As the Cop26 climate summit gets under way, and the so-called leaders of the world take centre stage to deliver yet more empty promises, we – five youth climate activists from five of the most affected areas across Africa, Asia, Central America and the South Pacific – have arrived despite attempts to shut us out.

We have sailed into Glasgow onboard the Rainbow Warrior to let these presidents, prime ministers, policymakers and CEOs know that our voices will no longer remain unheard. They cannot and should not have these talks without us and we’re demanding a seat at the table to make sure they finally act.

The climate crisis is a global crisis that requires global action. But it does not affect everyone in the same way. It’s a crisis of inequalities. We are all in the same storm, but we are not all in the same boat.

Today there are five times more extreme weather events – devastating storms, floods, droughts, water scarcity and heatwaves – than 50 years ago, and they disproportionately affect those of us living in the most vulnerable areas, especially in the global south. Last year, climate disasters displaced more people from our communities than war and violent conflict, again mostly from the global south.

Yet we are not the ones that have caused this crisis.

Since 1965, one-third of global emissions, driven by the relentless exploitation of fossil fuels, have been caused by just 20 companies. Rich nations are responsible for 92% of global emissions, with the US and countries in Europe causing almost two-thirds of those. We’re just the ones forced to live with, or sadly in many cases die because of, its impacts. Yet our voices continue to be sidelined.

In our home countries of Namibia, Bangladesh, Uganda, Mexico and Tuvalu in the South Pacific, we face many different challenges. But they are all exacerbated by the same injustices such as gender violence, forced migration and racial injustices, as well as the Covid-19 pandemic and the climate crisis. These are all symptoms of the same rotten system.

We have friends who have dropped out of school because droughts have forced their families into poverty and famine. Others are forced to literally sell their children in order to meet their basic needs. Many people have lost land, homes and crops to floods and rising sea levels. More are being forced to flee their homes and communities. And even just accessing safe drinking water is a daily struggle for many.

Thousands of people are dying right now because of the climate crisis: the world leaders at this summit have blood on their hands.

While corporate greed and a failure to act from governments in the global north are driving climate change, the disparities between rich and impoverished, between those who are causing this crisis and those who are not, don’t end there. The inequalities also run deep within our countries.

Corruption and neocolonialism are rife. Communities are displaced by industry as politicians sell off our land to oil companies, promising prosperity and jobs for local people who have been forced deeper into poverty by the climate crisis. Our communities are being misled. Those jobs never come, but the pollution, environmental destruction – along with emotional and cultural destruction – and more severe climate impacts always do.

For over a decade, rich nations have failed to deliver the international climate finance that they have promised. This is not aid, nor just the help they’re obliged to provide. This is a debt that they owe us for the environmental death and destruction that they have caused – and it must be paid in full. What little of this debt that actually is repaid rarely reaches those who need it. But no one questions our governments. No one checks up on how this money is being spent.

Policies put in place to protect our local environments are meaningless while corrupt politicians remain in charge. But speaking out in our countries can result in grave consequences. We are literally putting our lives on the line – so it is imperative that our voices are heard.

The leaders gathering in Glasgow have failed to act on the science. They have failed for decades to tackle the climate crisis. And they have failed to listen to people from the most affected areas who are now suffering from the consequences of their failure to act. Enough is enough.

We are here to let them know that we will continue to fight for climate justice until they stop failing us. They must not deny us the platform to freely defend our present and futures. They must not ignore our demands. And they must not continue to put profit over people and the planet. The system must be uprooted before it is too late.