Ouattara mobilises his peers for the restoration of degraded lands 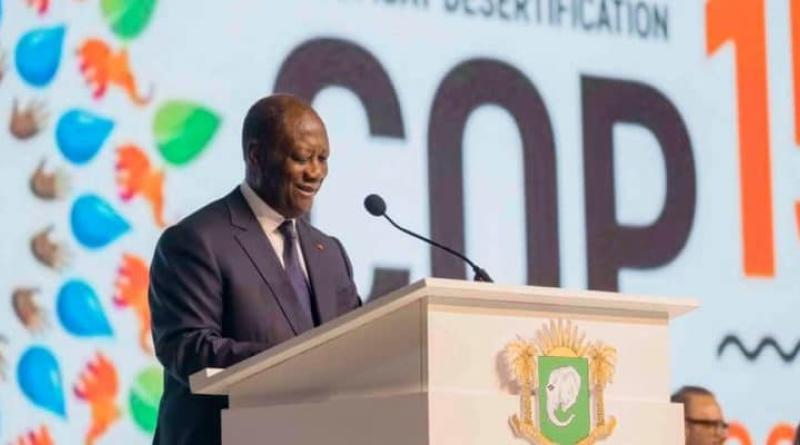 The 15th session of the Conference of the Parties (COP15) to the United Nations Convention to Combat Desertification (UNCCD) is being held from 9 to 20 May 2022 in Abidjan, Ivory Coast. At the opening of the meeting, Ivorian President Alassane Ouattara called for collective mobilisation to restore degraded land in Africa.

“Our people have great hopes for us. We have no right to disappoint them. Let’s act quickly, let’s act together to give new life to our lands,” said Ivorian President Alassane Ouattara. This was on 9 May 2022 at the opening of the summit of heads of state and government organised as part of the 15th Conference of the Parties (COP15) to the United Nations Convention to Combat Desertification (UNCCD) in Abidjan, Ivory Coast.

This summit is being held in the context of a climate emergency that is severely impacting land management policies and exacerbating the drought phenomenon. For Alassane Ouattara, it is essential to adopt policies that support the resilience of populations, particularly the most vulnerable. And this requires accelerating the implementation of the major decisions of the Paris Climate Agreement. “In this regard, I would like to reiterate my call on developed countries to reduce their greenhouse gas emissions, to keep the commitment to mobilise 100 billion dollars per year to help developing countries succeed in their adaptation to climate change and their energy transition,” he pleaded.

In a study published on 29 September 2021 on the slow pace of restoration of degraded land in Africa, the United Nations (UN) indicated that the continent has one billion hectares of dry land. This desertification is mainly caused by the expansion of agricultural land. According to a report presented by the UN Food and Agriculture Organisation (FAO) on 3 May 2022 in Seoul (South Korea) at the 15th World Forestry Congress, the continent has lost 49 million hectares over this period. The areas most affected are tropical and rainforests, which are much coveted by industrial agriculture, particularly oil palm plantations.

To reverse this trend, COP15 is addressing the restoration of one billion hectares of degraded land by 2030. Discussions also focus on protecting land from the effects of climate change, combating the increase in disaster risks such as droughts, sand and dust storms, and forest fires.

Why are wetlands so important in the fight against climate change?