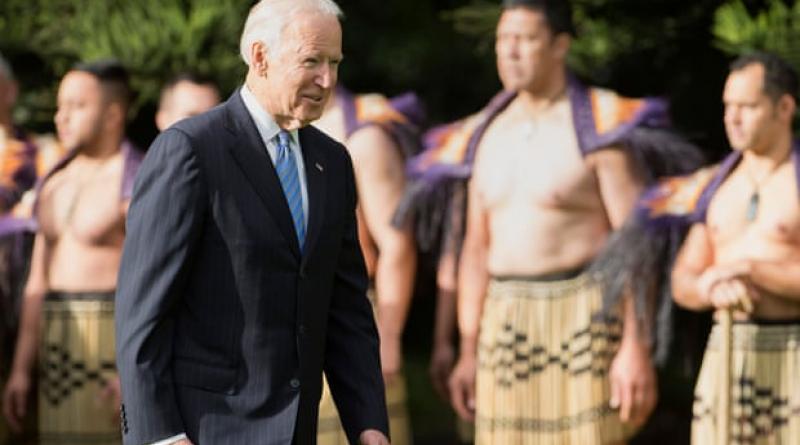 Optimism abounds as leaders from Fiji to Papua New Guinea welcome the new US president-elect.

Joe Biden’s presidential ascension had not even been settled when Fiji’s forthright prime minister was already urging greater US action on climate change from the incoming American leader.

“Congratulations Joe Biden,” Frank Bainimarama tweeted on Saturday afternoon. “Together, we have a planet to save from a climate emergency and a global economy to build back better from Covid-19.”

Bainimarama said the whole world, but particularly the imperilled Paific, would look to the US for global leadership in addressing the climate crisis.

“Now, more than ever we need the USA at the helm of these multilateral efforts - and back in the Paris Agreement as soon as possible!”

Bainimarama has even invited the US president-elect to attend the annual Pacific Islands Forum leaders’ meeting in Suva – “to the frontlines of climate change” - in August next year.

If Biden accepts, he will be the first US president ever to attend the Pacific’s major multilateral meeting, Hillary Clinton having attended as secretary of state in 2012. 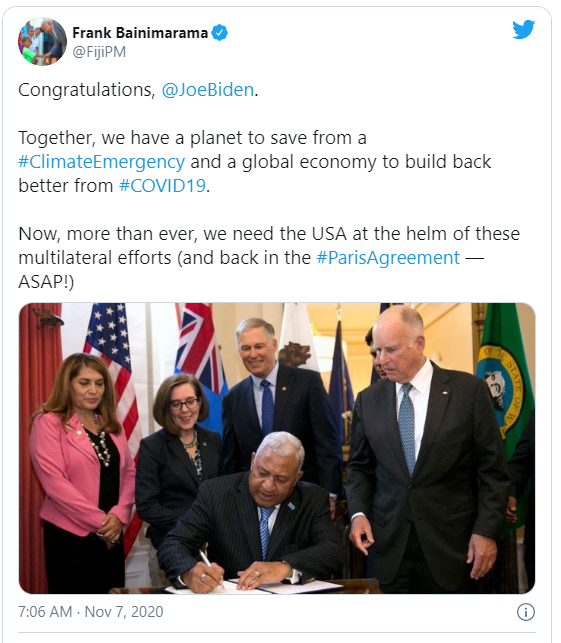 Biden has already committed the US to re-joining the Paris Climate Accord on the first day of his presidency, and to convening a global climate summit within his first 100 days in office.

He has a strong personal connection with the Pacific region, and with Papua New Guinea in particular. Born at the height of the second world war, Biden has said his young life was shaped by stories of his family’s service in the Pacific theatre.

Four uncles on his mother’s side sought to enrol in the military the day after the Japanese bombing of Pearl Harbour drew the US into the war.

“Papua New Guinea, that’s where my two uncles ended up, in the Army Air Corps of the United States Army,” Biden said in a speech in 2017.

“My mother’s number two brother, Ambrose Finnegan … was shot down, and his body was never found, in Papua New Guinea.

“And the other came home with malaria and was sick, off and on, for the better part of his life.”

After the election was called on Sunday morning, other Pacific leaders joined the global chorus of congratulations. Action on climate change, and the selection of Senator Kamala Harris – the first woman of colour elected vice-president – on the presidential ticket, were consistent themes.

Papua New Guinea’s prime minister, James Marape, said the US election “captivated the whole world … with our people glued to their TV screens”.

The New Zealand prime minister, Jacinda Ardern, said her country would work alongside the US to secure the “prosperity, security, and sustainability in the Indo-Pacific and Pacific Island regions”.

“The campaign by the president-elect has also shown the shared interests we have in addressing global challenges like Covid-19 and climate change.”

Niuean Dr Colin Tukuitonga, the former director-general of the Secretariat of the Pacific Community, said Biden’s election, and commitment to the Paris Agreement was “great news for the planet and my beloved Pacific Islands”.

The Cook Islands prime minister, Mark Brown, praised Biden’s choice of Harris as his running mate, describing it as “aspirational”.

Leaders from US territories in the Pacific also welcomed a new commander-in-chief.

Guam, whose residents are US citizens but not entitled to vote, supported Biden in an informal straw poll taken alongside local elections last Tuesday.

“I look forward to working with your administration for the good of our people, our island, our culture, and our national security in this part of the Pacific world,” Guam Governor, Lou Leon Guerrero, said. “Let us choose unity over division, love over hate, and healing over bitterness.”

Gregorio Sablan, the non-voting delegate to the US house of representatives from the US Pacific territory of the Northern Mariana Islands, said he would work “to advance the Biden-Harris agenda of controlling the pandemic, reviving the economy, continuing the fight against poverty, moving forward on racial justice …, and addressing the threat of climate change”.

The editorial board of the Samoa Observer wrote: “Mr Biden is a world away from President Trump on the issue of climate change ... there are reasons for Samoa – and the Pacific – to be optimistic.”

Joe Biden has promised significant commitment to the Pacific, particularly in the face of growing Chinese influence across the region. Vice-president under Obama’s “pivot” to the Asia-Pacific, Biden has consistently argued the US “is a Pacific country” and will remain a power in the region “as long as we exist”.

“Anyone who questions America’s dedication and staying power in the Asia-Pacific simply is not paying attention.”

What would a Biden victory mean for the climate crisis?