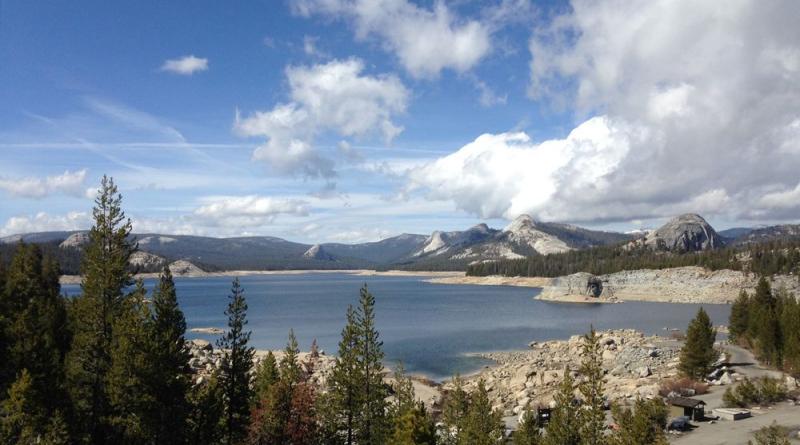 As the sun sets on California’s solar farms, a backup energy source deep in the Sierra Nevada Mountains springs to life.

The huge system of reservoirs and turbines can store energy during the day and then crank out electricity for 900,000 homes, using just water and gravity. As the state tries to make wind and solar work around the clock, officials want to build more like it. It won’t be easy: such projects take years to develop, are expensive and face stiff opposition.

The push by California and other states to revive the century-old technology -- called “pumped-hydro storage” -- underscores the limitations of modern batteries. While utilities are aggressively installing lithium-ion systems on California’s grid, facilities like the aging one in the Sierras can deliver far more electricity than anything made by Tesla Inc.

“It’s not as glamorous as a battery,” Neena Kuzmich, project manager for a proposed pumped-storage facility near San Diego, said in an interview. “But it’s a tried and true technology that provides the volume that we need.” 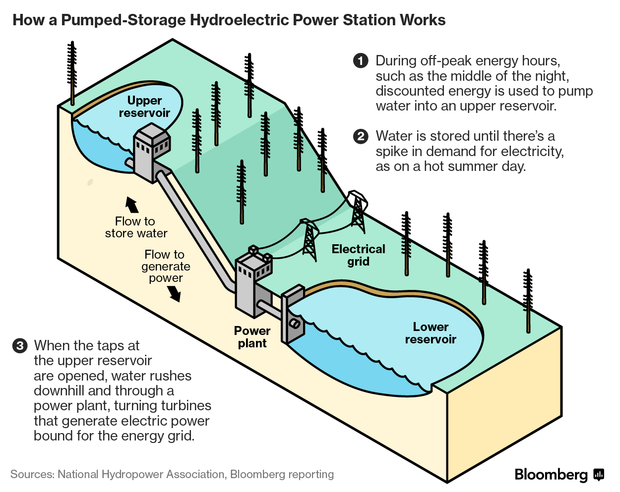 California’s goal to get 100% of its electricity from carbon-free sources by 2045 will require an unprecedented amount of energy storage. Lithium-ion battery installations produce a few hundred megawatts of electricity at most. The 35-year-old plant in the Sierras -- PG&E Corp.’s Helms Pumped Storage facility -- can deliver more than 1,200 megawatts at a clip.

The Swiss pioneered pumped-storage technology in the late 1800s. But it didn’t take off in the U.S. until the 1960s and 1970s, when dozens of plants were built to store surplus energy from nuclear reactors and other big plants. There are seven in California alone.

Renewed interest is surging. The Federal Energy Regulatory Commission has issued 34 preliminary permits for companies and government agencies exploring projects in New York, Pennsylvania, Wyoming and elsewhere. Another 16 applications are pending. Nine are proposed in California.

The idea is simple. Take two reservoirs at different elevations, connected by pipes or tunnels. When electricity is abundant, pump water from the lower reservoir to the one uphill. When the grid needs power, let the water flow back down through turbines.

“They provide a great level of flexibility and are essentially a massive battery. The challenge for pumped hydro is the very high capital costs and long development times.”
-- Yayoi Sekine, BloombergNEF storage analyst

While the concept is straightforward, execution isn’t. The projects can cost more than $1 billion to build. They’re cheap once up and running, but the huge upfront price makes them more expensive overall than utility-scale batteries, according to BloombergNEF. Plus, securing permits, building dams and boring tunnels can take 10 years. And since the process often involves flooding valleys, most projects face resistance.

That’s particularly true in California. Environmentalists there have scrutinized pumped storage projects not just for their impact on wilderness -- but for using too much water, too. The furthest along of the projects proposed in the state would be next to Joshua Tree National Park, using abandoned mining pits for reservoirs. It has met fierce opposition.

“It would be drawing extraordinary amounts of water from an aquifer that feeds essentially everything in the park,” said Kathryn Phillips, Sierra Club director for California.

A spokesman for NextEra Energy Inc., which bought a majority interest in the project last year, said environmental impacts were thoroughly vetted before federal regulators approved it in 2014. Construction has yet to begin.

Other projects would incorporate existing reservoirs. The Los Angeles Department of Water and Power has proposed converting the Hoover Dam into a giant pumped-storage facility. And the San Diego County Water Authority wants to build a reservoir uphill from an existing one to create a storage system.

Startup Oceanus Power & Water, meanwhile, has applied for federal permits to study two spots on the coast for systems to both store energy and desalinate seawater. They would pump ocean water up to a reservoir. The water would then flow back down, with some diverted into a system to remove the salt. The rest would power turbines.

“Anywhere there’s a large coastal population in a semi-arid part of the world, our solution can work,” said Neal Aronson, chief executive officer of Oceanus.

— With assistance by David Ingold