Scientists turn to tech to prevent second wave of locusts in east Africa. 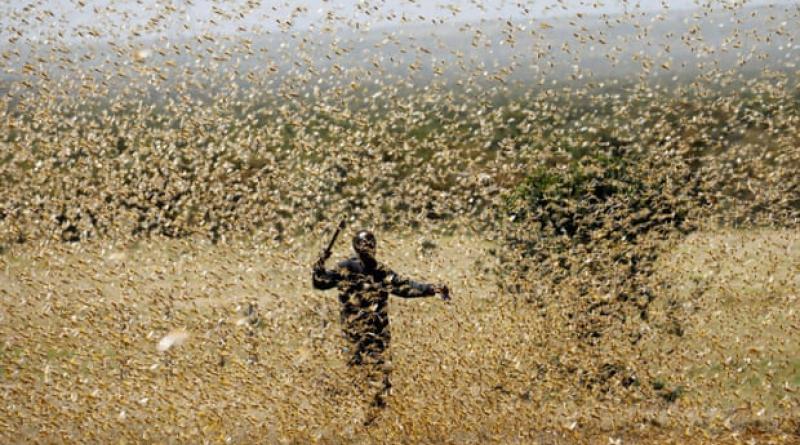 Scientists monitoring the movements of the worst locust outbreak in Kenya in 70 years are hopeful that a new tracking programme they will be able to prevent a second surge of the crop-ravaging insects.

The UN has described the locust outbreak in the Horn of Africa, and the widespread breeding of the insects in Kenya, Ethiopia and Somalia that has followed, as “extremely alarming”.

The UN’s Food and Agriculture Organization has warned that an imminent second hatch of the insects could threaten the food security of 25 million people across the region as it enters the cropping season.

Kenneth Mwangi, a satellite information scientist, based at the Intergovernmental Authority on Development climate prediction and applications centre, based in Nairobi, said researchers were running a supercomputer model to predict breeding areas that may have been missed by ground monitoring. These areas could become sources of new swarms if not sprayed.

“The model will be able to tell us the areas in which hoppers are emerging,” said Mwangi. “We will also get ground information. These areas can become a source of an upsurge, or a new generation of hoppers. It becomes very difficult and expensive to control, which is why we are looking to prevent an upsurge.

“The focus will be on stoppinghoppers becoming adults, as that leads to another cycle of infestation. We want to avoid that. We want to advise governments early, before an upsurge happens.”

So far, the supercomputer, funded by £35m of UK aid as part of its Weather and Climate Information Services for Africa programme, has successfully forecast the movement of locusts using data such as wind speed and direction, temperature, and humidity. The model has achieved 90% accuracy in forecasting the future locations of the swarms, Mwangi said.

Researchers are now inputting data on soil moisture and vegetation cover to help predict where eggs have been laid and are likely to hatch and thrive. This will then provide data on where African governments can direct their spraying efforts, helping to control the hoppers before they swarm.

“So far, we’ve been able to catch where the swarms are going to be,” he said. “We were able to tell the government of Uganda that locusts are expected to come through and they mobilised the army, and that worked well. Now we can focus on the areas that locusts have reproduced.

“Governments are working, spraying in areas that hoppers have been reported. So now, the governments might be able to catch areas they have missed and haven’t been reported.”

Mwangi added: “Hopefully, based on current intervention, the worst case scenario can be avoided. The Kenyan government is on high alert and effective control measures have been put in place.”

Billions of locusts have already devastated crops in Somalia, Ethiopia and Kenya, countries with fragile food security. Swarms have also been spotted inUganda, Tanzania, the Democratic Republic of the Congo and South Sudan.

A single swarm can contain up to 150 million locusts per sq km of farmland.

The last locust surge in Africa, in 2003–04, involved two or three generations of the insects across 23 African countries and took two years to control, Mwangi said.

Now is the most “critical period” for control of the desert locusts, because any eggs laid in the past month coincide with the cropping season.

Abubakr Salih Babiker, a climate scientist at Nariobi’s climate and prediction centre, said: “The risk for us is that this is the beginning of a new growing season, from Somalia and Uganda, and if the desert locusts are not controlled it can be a huge crisis in food security of the whole region.”

Laura Paterson, the coordination officer for the UN World Meteorological Organization in New York, said: “We have been receiving the model output showing where the locusts are expected to spread. This type of prediction analysis means the UN is on the front foot to know what’s coming, and the UN system on the ground is able to deal with it.”

* Title photo: A man attempts to fend off a swarm of desert locusts at a ranch near the town of Nanyuki, in Kenya’s Laikipia county. Photograph: Baz Ratner/Reuters

Uganda's 'locust commander' leads the battle against a new enemy.