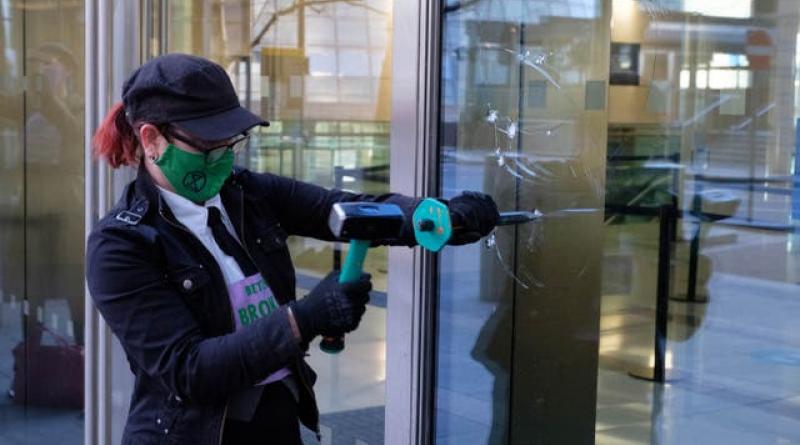 ‘Compare a crack in a window to funding wildfires and flooded homes,’ says campaigner.

Police have arrested a group of environmental activists who smashed the windows of Barclays’ London headquarters on Wednesday to protest against the bank’s “continued investments in activities that directly contribute to the climate and ecological emergency”.

Seven members from the Extinction Rebellion group were detained following the protest outside the bank’s Canary Wharf office, after they pasted the message “In Case of Climate Emergency Break Glass” on the front of the building.

The protesters, wearing patches on their clothes that read “Better broken windows than broken promises”, accuse Barclays of investing too much in fossil fuels.

Sophie Cowen, a 30-year-old campaigner from London, said: “You may dislike our action today but I ask you to compare a crack in a window to funding wildfires and flooded homes.”

The action was part of the group’s “Money Rebellion” in which they use “nonviolent direct action and cause damage to property to prevent and draw attention to greater damage”.

A spokesman for the Metropolitan Police said: “Police were called at approximately 7.13am on Wednesday 7 April to reports of a demonstration outside a commercial premises in Churchill Place, Canary Wharf.

”Officers attended and found a number of windows had been damaged.

“Seven women were arrested on suspicion of criminal damage and taken into custody at an east London police station.”

A Barclays spokesman said: “Extinction Rebellion are entitled to their view on capitalism and climate change, but we would ask that in expressing that view they stop short of behaviour which involves criminal damage to our facilities and puts people's safety at risk.

”We have made a commitment to align our entire financing portfolio to the goals of the Paris Agreement, with specific targets and transparent reporting, on the way to achieving our ambition to be a net zero bank by 2050, and help accelerate the transition to a low-carbon economy.“

The protest came a week after activists splashed black dye on the facade of the Bank of England in the heart of London’s financial centre.

Last August, the group organised a five-day demonstration in London where they glued themselves to the ground, marched on Parliament Square, arranged sit-ins and blocked roads.

Some 600 people were arrested for failing to comply with Covid regulations, which banned gatherings with more than 30 people.