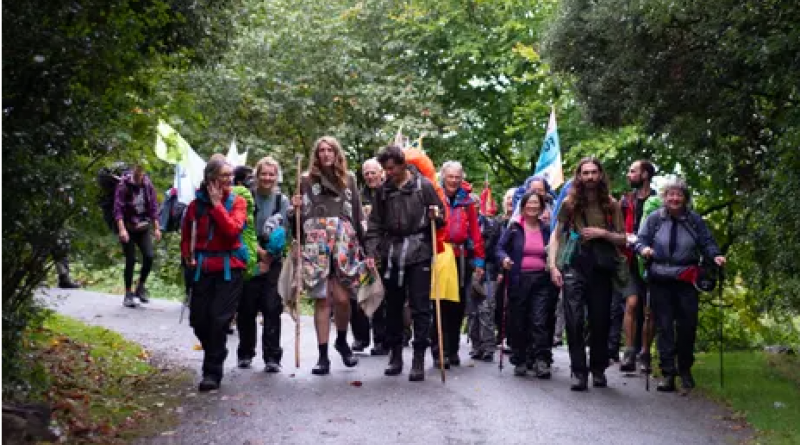 Accompanied by songs, stories and a stash of lentils, a group trekked from London, connecting with their faith, the countryside and the people they met along the way.

While most delegates deliberate about whether to drive, fly or catch the train to the Cop26 summit in Glasgow, a dozen or so pilgrims have just spent the past 55 days getting there on foot from London. Members of the female-run faith group Camino to Cop26 have been walking a 500-mile route since early September.

Theirs is just one of a number of pilgrimages reaching Glasgow this weekend, with about 250 individuals expected, some coming from as far as Poland and Germany – one group has walked more than 1,000 miles from Sweden. Extinction Rebellion Scotland says their arrival will mark the “opening ceremony” for nonviolent protests planned in the Scottish city and around the world during the UN climate talks.

From 18-year-old students to 74-year-old grandmothers, members of Camino to Cop26 – which is part of Extinction Rebellion – have been raising awareness about the climate and ecological crisis along the way. On some days they had 70 people walking with them. The group spent nights sleeping on the floors of churches, village halls and community centres, raising £17,000 to cover their costs, with any additional money going to support the work of climate activists in developing countries.

Wandering monk-like from place to place and surviving off the hospitality of local people is an ancient activity – in this case with a modern spin. The group’s support vehicle was an electric van packed full of lentils and rice, and along the way they joined samba players under Birmingham’s Spaghetti Junction, waved flags above the M6, and found spots for wild swimming. They also consumed a lot of vegan dinners.

There were the same old aches and pains – blisters, dodgy knees, achilles heel injuries – as well as the challenge of spending eight weeks with a group of people they had never met before. In the 14th century’s Canterbury Tales, Chaucer wrote about pilgrims telling stories to entertain one another along the way, and little has changed on that front. Belting out songs and poetry was encouraged, and there was even an impromptu barn dance thanks to one pilgrim who was good enough to carry a fiddle and bagpipes.

They were only able to wash about once a week. “I think I’m quite smelly at this point,” says Steph Alderton, 26, who is a few days from Glasgow when I speak to the group. She has everything in a 10kg rucksack: one change of clothes, a few pairs of extra socks, a sleeping bag, sleeping mat, book, and packet of peanuts – standard packing. “You have to let go of your daily shower. The older people in the group say that was normal when they were young.”

Participants have a spectrum of beliefs, from devout Jews, Christians and Buddhists to committed atheists, like Alderton, who left her job as a career adviser at a school in Birmingham in June to put more energy into climate activism. The notion of “intention” is what makes a walk a pilgrimage, and for Steph it was not about reflecting on God, but learning about the UK’s people and wildlife.

“It makes me feel so sad to know so many animals are going extinct. That’s what drew me into the climate crisis, and walking the length of the country seemed like a good way to reflect on that connection with wildlife,” says Alderton, who liked the outreach side of it and found speaking to people in their own communities made it easier to connect. “Everyone needs one issue that is their gateway into activism and for many people that will be a local issue which leads them on to thinking about things more generally.”

The Rev Helen Burnett, vicar of St Peter and St Paul’s Church in Chaldon, Surrey, helped organise the pilgrimage. As a Christian, she says she believes she must act now to fulfil her calling to “love thy neighbour” and care for vulnerable people. Inadvertently channelling Forrest Gump, Burnett led a Sunday service at her parish and then just kept walking. She was able to join the pilgrims for about half the time, yo-yoing up and down so she could spend the other half fulfilling duties in her parish.

She was moved to walk because she believes more and more people are discovering God is in nature, not a building: “So many people, when you ask when they feel most connected to God will say ‘on top of a mountain’ or ‘when I’m in a garden’, and I think that’s really powerful. That was part of the Celtic tradition and the history of the church is we’ve sort of domesticated God and popped him inside a nice, sanitised box, but people find God in the outside world.” A few of her parishioners joined her on the walk.

Communities the group passed through were surprised and delighted to see them, and some people applauded them as they passed, she says. “I’ve been thanked by construction workers, people at the school gates. They’ve just thanked us. Ordinary people walking has a sort of resonance.”

For the 62-year-old, walking also means praying. “We now have doctors and science but we still find we resolve things by walking and praying,” she says, “it still seems to resonate, for people of faith and no faith, because you are stripping away the accretions of normal life … and only carrying what you need with you.”

She recently did a mini pilgrimage from Vauxhall station to Southwark Cathedral in south London. She says wandering without solely focusing on getting to the destination meant she saw more, such as the River Thames, marine mammal rescue teams, the Covid memorial wall. She believes that by walking towards a sacred place you are creating change within yourself – and it is important not to be busy when you do it.

For her, the climate and ecological emergency will mean we need to get rid of a lot of “stuff”, and the changes will be greater than any other change her parishioners have undergone. “They know in their heart of hearts that something is up but it’s so huge they don’t know what to do. And they’ve got to carry on their lives, and life is busy anyway.”

Burnett feels as a religious leader she has to speak out: “Politicians want to get back into power, but speaking out as religious leaders we have less to lose.” She has previously been arrested for failing to move off Lambeth Bridge during a climate crisis protest in the capital.

Melanie Nazareth, who is a barrister, organised the route with Burnett. When she started mapping it out in January this year, she plotted the quickest walking route, which was 450 miles, but then took out a directory of churches, emailed them, and plotted those that said yes to hosting them, which made the route a bit more wiggly, clocking up 500 miles in total. Christian Climate Action threw its weight behind the idea and helped with contacts. Nazareth found the final places for her pilgrims to stay just before they set off.

Organising it became a full-time job in itself, she says, adding: “This is the biggest crisis of my lifetime. I have given up a lot of work to facilitate climate protest.”

For Nazareth, who is also Christian, speaking to people along the way has provided inspiration on how to live a more sustainable life. “One of the revelations has been going through rural communities and learning how we have a model that can be built upon – they eat more locally, grow a lot of their stuff, [are] proud of knowing where everything they eat comes from and producing it themselves.”

Many people she met were good at recycling and reusing things, but when it came to talking about the need for political action to reduce carbon emissions, they said politicians didn’t listen, she says, adding: “That sense of powerlessness has been there right from when we started [the walk].”

Nazareth turns 60 this year and says the walk has been a “complete transformation” on a personal level. Before this pilgrimage, her main form of walking was a gentle stroll after Sunday lunch, or going down to the station to catch the train. “To suddenly get up and do this has shown me that if I can do it, then people can step into their power and do things they can’t imagine. They just need to take that first step – and when you take that first step, then you can make the second and the third.”

Despite church-going numbers declining, a growing number of people are rediscovering the joy of pilgrimage around the world. Other pilgrimages arriving in Glasgow this weekend include Marcha a Glasgow, coming from Bilbao via Portsmouth; an ecumenical pilgrimage coming from Poland, Sweden and Germany; the Pilgrimage for Cop26, coming from Dunbar in Scotland; and the Young Christian Climate Network coming from the south-west of England.

Walking means different things to the Camino to Cop26 pilgrims, but it is fundamentally about trying to make a deeper connection with God, the countryside, its wildlife and people. Burnett says she believes that if more political delegates had walked to Cop26 they would have built a community that could begin to tackle the enormous challenges required. “They would have had to work things out differently in their hearts and relationships. Doing a pilgrimage forces you to do things differently.”