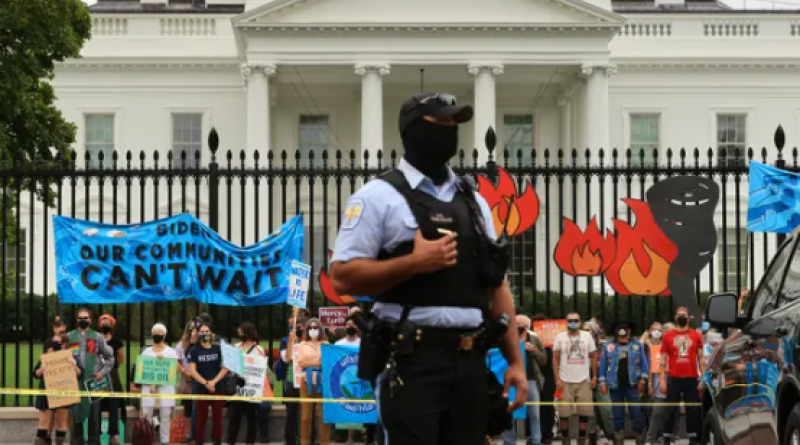 The protest comes a day after Joe Biden appeared ready to settle for a smaller environmental proposal ahead of the COP26 summit.

With little more than sun hats, placards and folding chairs, five young activists have begun a hunger strike in front of the White House urging Joe Biden not to abandon his bold climate agenda.

The protest came a day after the US president threatened to water down his $3.5tn social and environmental legislation and with Washington’s commitments about to face scrutiny at the COP26 summit in Glasgow.

The five protesters said they will eat no food and drink only water. They intend to gather in Lafayette Park every day from 8am to 8pm until their demands – which include a civilian climate corps, clean energy performance program and funding for environmental justice – are satisfied.

“I’m nervous in that I know that I will go on hunger strike until the demands are met, until I’m absolutely physically unable to,” said Ema Govea, a high school student who turned 18 on Tuesday. “That’s scary and I know my parents are worried and my friends back home are worried.”

Biden met privately on Tuesday with nearly 20 moderate and progressive Democrats in separate groups as he appeared ready to ditch an ambitious $3.5tn package in favour of a smaller proposal that can win passage in the closely divided Congress. A provision central to Biden’s climate strategy is among those that could be scaled back or eliminated.

Joe Manchin, a conservative senator from coal-rich West Virginia, has made clear that his opposes the Clean Energy Performance Plan, which would see the government impose penalties on electric utilities that fail to meet clean energy benchmarks and provide financial rewards to those that do, in line with Biden’s goal of achieving 80% “clean electricity” by 2030.

The hunger strikers, who have worked with the Sunrise Movement youth group, warned that such concessions would be disastrous for the planet.

Govea, from Santa Rosa, California, said: “Joe Biden made these campaign promises and we worked really hard on his campaign and to get him elected so that he could stop the climate crisis on these promises that he made.”

Abandoning Biden’s commitments would signal to Cop26 that America has failed, Govea added. “I won’t let Joe Biden send a message to the world that he’s willing to give up on climate because I know that the American people, and young people across the country and across the world, are terrified but they’re ready to fight.”

The hunger strikers drew TV cameras and curious glances from tourists in an area close to the White House that has reopened after months of security restrictions. As they sat, they spoke to reporters, checked emails and contemplated the long haul ahead.

Paul Campion, 24, had skipped his usual breakfast of a bagel with cheese and eggs. He said: “I’m nervous about losing my my body weight, my muscles, about what it will do to my energy, to my brain, but I’m putting my body on the line because I’m here to remind Joe Biden of the promises that he’s made and that the stakes are this high, that young people are out here not eating because it’s this urgent and it’s this important.”

Campion, a community organizer from Chicago, and his fellow protesters are “sick and tired of broken promises” from Biden and the Democrats, he continued. “I’m hunger striking because I want to live a full, beautiful life without fear of the climate crisis and I want to have children, I want to play with them in the park and I want to have community dinners where I invite my friends and family over and we sing and we have a bonfire.

“That’s the future that we can have if Joe Biden will side with the people and deliver on his own agenda and actually fight for it instead of siding with ExxonMobil executives who are trying to gut his climate agenda and trying to prevent any significant federal action on climate change.”

‘People try to stop us speaking up’: Angelina Jolie’s lessons from young activists

Climate activists are being killed for trying to save our planet. There is a way to help