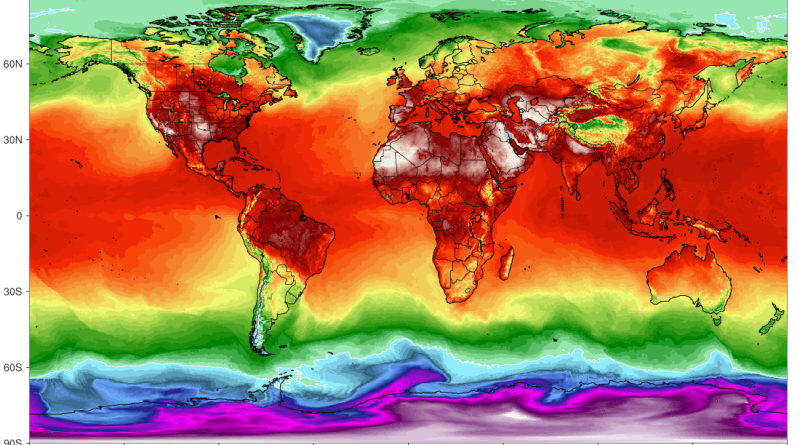 There’s a brutal truth that I think we’re all going to have to contend with.

Take a look out there at the world. How do you think things are going?

Europe’s on fire. The continent. Fires stretch from France, through Spain and Portugal, to Greece. The temperature’s hit 45 degrees Celsius. Weary firefighters are trying to put out the blazes. Stories abound of families and vacationers fleeing for dear life.

In London, meanwhile, the government has issued its first ever national emergency over…the temperature. It’s going to hit 40 degrees Celsius, maybe more. A lot of people are going to die. This being Brexit Britain, a place basking in stupid Darwinian glory — nobody much cares. But Britain’s hardly the kind of nation prepared for extreme heat. This is summer now. A time of killing heat.

In America? The West is running out of water. Lake Mead and Shasta Lake are running dry. They’re projected to hit the breaking point in 2025. That’s two years away. This system is headed for catastrophic failure. Because of it, entire cities like Las Vegas and Phoenix exist. It sustains California’s agriculture, which is America’s breadbasket. When it goes?

Then there’s the East. Through Iran and the Indian Subcontinent, the hottest temperatures on earth are being recorded. There, people are lucky to have electricity for 12 hours a day.

All that, though? It’s only the beginning.

Did I mention the pandemic? YACW? Yet Another Covid Wave? We’ll come back to that one.

Because of the killing heat, crops are beginning to fail. What kinds of crops? The better answer is: what isn’t on the list? Harvests for everything from cocoa to coffee to wheat to sugar to mustard are beginning to decline. They’re not going to stop, because neither is the heat. The crops our civilization depends on? They can’t survive the killing heat, either. So what happens as harvests fail?

Prices spike. Shortages break out. Both of those are beginning to happen now. My lovely wife’s back in America — I’m in Europe. She calls me daily to tell me how fast prices are rising. I commiserate, and tell her that Europe’s on fire. This is our daily catch-up chit chat.

In an Age of Extinction.

What happens as prices spike? Inflation roars. And what happens as a consequence of inflation? People get poorer. What do people who are getting poorer not have the money to do anymore? Invest. They can’t afford to pay the taxes which fund modern social contracts. And so societies simply begin to fall apart. This is the vicious cycle many, many civilizations have fallen into before us, essentially. Poverty breeds an inability to take collective action and make collective investments. All the systems of a golden age? They simply begin to crumble, break down, fail — and now there’s nothing much left over to repair them, because people are just fighting for basics, a little more bitterly every day.

Sound like the path we’re on? It should, because it is.

What’s the brutal truth I’m trying to get to? It goes like this. We’re not going to make it to 2050. Not even close to that far.

By “make it,” I don’t mean…some kind of dumb Marvel Movie. We’re all going to die tomorrow! Nope. I mean “Civilization as we know it.” I mean that things are going to collapse much, much faster and harder than we think. Isn’t that already the case? That’s the trend which every clear thinking person should understand very, very intently right about now.

Take a hard look at right now. Do you really think our civilization’s going to survive another three decades of this? Skyrocketing inflation, growing shortages, runaway temperatures, killing heat, failing harvests, shattered systems, continents on fire, masses turning to lunacy and theocracy and fascism as a result?

Seriously? Another three decades? Where every summer is that much worse than this one?

Let’s be real for a moment.

Why do I pick 2050? That’s the date that, so far, our efforts to fight “climate change” are centered around. The nations of the world have gotten together and chosen 2050 as the date to hit “net zero,” meaning that’s when carbon emissions are planned to be balanced out.

A lot of things do. Megafires start, and don’t go out. Today’s crop failures are that much worse. Systems begin to shatter, and the drought America’s West faces is more or less everywhere that’s not lucky enough to be right next to some kind of permanently self replenishing water source. Inflation spikes even harder than now as a result of all this, and people can’t afford the basics, so taxes have to be cut, which means that…there’s nothing left over to invest in the very systems we need to fight all the above.

I’m not saying that will happen by 2030. LOL. Maybe you missed my point. I’m saying that’s already happening.

Now imagine 2040. Pandemics, which are a trend, an effect of extinction — as animals and humans rub shoulders — go right on accelerating. Covid never went away. It kept on mutating, and new kinds of poxes emerged, too. Then there are the crop failures, shortages, system failures, inflation. Then there’s the demagoguery and fascism. And atop all that, the animals have begun to die off now in serious ways — and so all that depends on them is starting to fail, too. The fish aren’t there to clean the rivers, which now run backwards, as the sea invades them. The insects aren’t there to turn the soil. What happens then?

Temperatures are rising faster than models predicted. Nations like America are imploding faster than anyone much can believe. Animals are fleeing to the poles. Species are dying off at horrific rates. Glaciers are melting, fires are burning, storms are brewing, pandemics just keep going…more and harder than was predicted or expected.

The worst case scenario keeps on coming true. That is because we are not a civilization living according to a precautionary principle: hope for the best, maybe, but plan for the worst. At least have some kind of rudimentary contingency plan, if things really get that bad. Because that bad is existential. Have something in the cupboard. Have something saved up for a rainy day. We’re just sitting here, deer in the headlights of the apocalypse.

Our entire civilization’s efforts to combat the Event which will define history forevermore — Extinction, the sixth one in deep history, the last one being the Permian, which wiped out 96% percent of all marine species — boil down, so far, to just this. Let’s hit net zero by 2050, guys!! It’s not enough. It not enough fast enough, either. We’re not going to make it to 2050. What’s going to be left by 2050 is a smoking ruin of what was once a civilization, ravaged by pandemics, incinerated by megafires, desperately seeking salvation in theocracy and waging bitter wars, fascism pitting neighbors at one another’s throats, like in America, a thing of shattered systems and institutions, a mere haunted memory of a civilization.

Let me put that in less poetic terms. Our civilization, our societies? They’re beginning to struggle to provide the basics now. Water, clean air, energy, food, your house not being incinerated today. That’s right now. Three more decades of this? Getting worse by the season, month, day? They won’t have any functioning systems left. At that point — long before then, in fact, probably sometimes around the mid 2030s — our civilization will not be able to provide the basics at all. Chronic shortages of everything from food to water to medicine to electricity will be normal, as will all the effects of such shortages, from inflation to political instability to a collapse in social bonds and trust.

We are a civilization struggling to provide the basics right now. We are definitely not going to make it to 2050.

Everybody should understand this. Not to despair. But to realise that what we are doing as a civilization is inadequate. It is not nearly enough. To combat Extinction. How could it be? Extinction — the Event we’re now entering — is going to be the single greatest occurrence in human history. We have never experienced anything remotely like it in the 300,000 years we’ve existed, because the last time it happened was 65 million years ago. Extinction will cleave time, shape politics, and define culture forevermore, after us. Our progeny will regard us the way we regard Stone Age people, or maybe medieval sorts — why didn’t they do anything, they’ll wonder? Why did they sit there glued to dumb Marvel Movies and debating pronouns and letting demagogues scapegoat and hate…while their planet died?

What we are doing is inadequate. You don’t have to think too hard about it. Our civilization’s attempts to combat Extinction so far have resulted in…this. This dystopia we currently live in, where Europe’s on fire, inflation’s spiking, Covid never goes away, and all the rest of it. Our efforts are self-evidently inadequate. Things are this bad right now. Go ahead, and think about 2025. And shudder. Most of us can’t even imagine the world in 2030, or 2040. Will there even be one? What will be left of this thing we once called civilization?

Vague goals to hit “net zero” by 2050 are like standing in the basement of a burning house, and agreeing to call the fire department in the morning. Sure, they might put out the fire. But you won’t have a house, and you’ll be dead. It’s not good enough, and it’s not going to work.

We need to act now. What needs to be done? What an exasperating question. You know what needs to be done — pundits have just taught you to play dumb. We all know what needs to be done. We need a massive, massive wave of investment, now. To rebuild systems that are failing. Systems, this time, that last for a millennia. To figure out how to get clean water, clean energy, steel, iron, cement, fertilizer, without fossil fuels. We need to invest in a pan-Covid vaccine, and keep the next ones at bay. We need agricultural systems that can survive the killing heat. We need to give everyone on planet earth an education, an income, healthcare, to prevent tomorrow’s fascisms, pandemics, demagogues. We need whole new sectors, careers, jobs — what do you call someone that brings an ecosystem back to life? That figures out how to save a dying species? Who guards and protects an ocean, river, forest?

We need to do all this stuff. Pundits and leaders are clowns. They’re sitting there overthinking it, so that they have an excuse for inaction. But do you enjoy living in the 2020s? Like the megafires, inflation, never-ending pandemic, demagogues, lunatics, heat? Go ahead and tell me you want more of this. That’s what I thought. Nobody sane does. There’s no need to overthink it.

We all know what needs to be done. What’s missing is the will. The left is too busy debating pronouns to care about the fate of life on the planet. The center is too busy terrified of the right — and too busy laughing at the left — to lift a finger to save much of anything. The right, meanwhile, has figured out that scapegoating vulnerable groups is a magic spell that enchants working classes even more effectively than Marvel Superheroes in dumb outfits. And so we’re going nowhere. Watching all this, young people are in a state of paralytic shock, tuned out and burned out.

Everyone should understand. We’re not going to make it to 2050. Until and unless we change. Demand better. Alter our own societies, habits, attitudes, expectations. Transform our social contracts and economies and polities. Stop overthinking, cowering, debating, and get it done. Begin doing what we all know needs to be done — sure, there are a few lunatics who’ll still “debate” it. But the rest of us know.

It’s now or never, my friends.