Why airlifting rhinos upside down is critical to conservation. 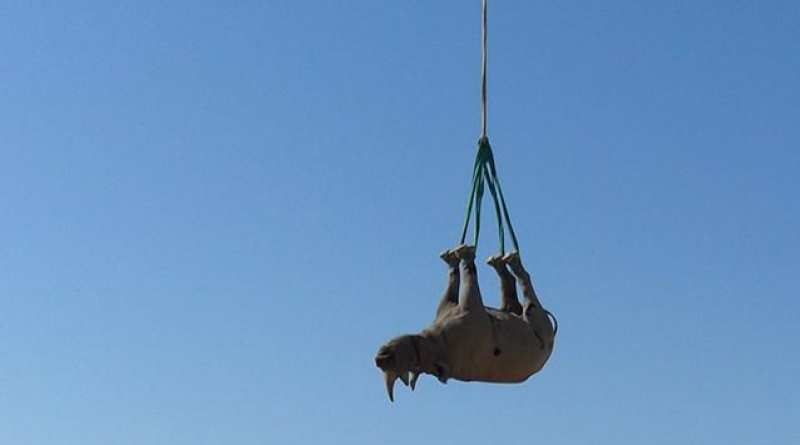 Swinging above the African savannah, an upside-down rhino suspended from a helicopter looks comically surreal. But for the black rhino, flying to new territory is no laughing matter -- it's about survival.

Most rhino translocations are carried out with trucks, but some remote locations can't be reached by road. So ten years ago, conservationists began using helicopters, on an occasional basis, to move rhinos to and from inaccessible terrain. The rhino is either placed on its side on a stretcher, or hung upside down by its legs.

Conservationists like the upside-down airlift because it's faster, easier and less expensive than the stretcher option, but until now it hasn't been clear how being flipped affects the rhinos.

Seeking to find out, the Namibian government asked a research team at Cornell's College of Veterinary Medicine to look into the practice. The results, published in January, were surprising. "We were anticipating that the rhinos would fare worse hanging upside down," says Robin Radcliffe, a senior lecturer in wildlife and conservation medicine.

Instead, Radcliffe and his team found that although it looks like an uncomfortable experience, upside-down flying is the better option for rhino health.

The right way up is upside down

Namibia is home to a nearly a third of Africa's black rhinos -- one of two rhino species found on the continent.

Starting in 2015, the Cornell team suspended 12 black rhinos -- each weighing between 1,770 and 2,720 pounds -- upside down from a crane, and placed them in a side-lying position for comparison.

The researchers measured biomarkers for respiration and ventilation, and found that the rhinos had higher blood oxygen levels when upside down. 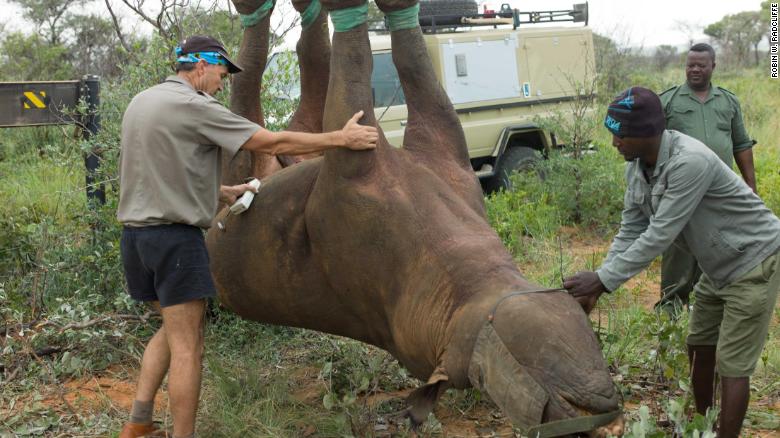 For the study, the research team from Cornell suspended 12 black rhinos from cranes.

Radcliffe says the upside-down position allows the spine to stretch which helps to open the airways. Additionally, the team found that when lying on their side, rhinos have a larger "dead space" -- the amount of air in each breath that does not contribute oxygen to the body.

The difference between the two postures was small, but because the strong anaesthetic used on the rhino causes hypoxemia -- low oxygen levels in the blood -- even a minor improvement makes a difference to the rhino's welfare.

Whether on their side or upside down, airlifting a rhino requires two helicopters: a small one to dart the rhino with a sedative, and a larger one to carry the animal. When the rhinos are lifted lying down, the stretcher adds additional weight, and the process takes longer -- according to Radcliffe, it can take a team of six up to 30 minutes to position and secure the rhino on the platform.

By contrast, attaching ropes to the animal's legs and feet can take just minutes.

Radcliffe says it both reduces the expense -- together, two helicopters cost around $4,000 per hour -- and improves the wellbeing of the animal, by cutting the sedation time. The rhinos are sedated with opioid tranquilizers that are 1,000 times stronger than morphine and pose one of the biggest risks to the animal, whether it's being moved by road or air, says Radcliffe.

Why do conservationists move rhinos?

Black rhinos live in desert, shrubland and savannah across Africa, with the biggest populations in Namibia, South Africa, Kenya and Zimbabwe. In the 1960s, more than 100,000 black rhinos lived in the wild, but 30 years of aggressive poaching wiped out 98% of the animals. By the mid-1990s, just 2,354 black rhinos remained.

Since then, careful and targeted conservation efforts have more than doubled black rhino numbers to around 5,600.

But while the population is growing, the black rhino isn't out of the woods yet, says Jacques Flamand, leader of the World Wildlife Fund's Black Rhino Range Expansion project.

Rhinos are a "density-dependent" species, says Flamand, which means if there are too many in one area, their numbers will decline unless some are translocated elsewhere. Moving rhinos also helps to ensure a diverse gene pool, he says. "We wouldn't want a black rhino bull to mate with his daughter or mother, which in nature would be unlikely due to the emigration of males, but in the fenced reserves, is a real risk."

And rhinos are still pursued by poachers, who target them for their horn, which is highly prized as an ingredient in traditional Chinese medicine and for jewelry and ornamental carvings. In some cases, rhinos are rescued from poaching hotspots and moved to areas where they can be monitored and protected.

In Namibia, government wildlife conservancy programs move rhinos to farms and reserves in remote communities. Local people are trained as game guards and rhino rangers, which helps boosts the local economy and keeps the animals safe, says Simson Uri-Khob, CEO of Save the Rhino Trust Namibia.

In 2020, rhino poaching in Namibia was down 40% from 2019, which Uri-Khob credits to stronger community involvement: "We have more boots on the ground compared to previous years."

Will we see more flying rhinos?

Currently, the majority of rhinos are transported by road, and most airlifts involve journeys of around 30 miles, in trips lasting 20 to 30 minutes, says Radcliffe.

But airlifting rhinos is likely to become more common in the future, he says, as more rhinos are moved to rugged, inaccessible areas such as Namibia's northern Kunene region.

"Namibia had the foresight to recognize that this type of transport will only increase in the future and that we should better understand the safety of the rhinos themselves," Radcliffe says.

He and his team hope to conduct research on longer airborne translocations, and investigate the impact of flight on brain activity and blood flow. Additionally, "we know they do fine short-term, but we would like to monitor the rhinos after upside-down translocation, to see how they do long-term," he says.

Radcliffe hopes his research will lead to better protection for these endangered animals. "What we can do as conservationists is to make sure that we provide the best security and the best management so that rhinos can recover," says Radcliffe. "We have an obligation as global citizens to protect these animals."

And then there were two: can northern white rhinos be saved from extinction?