Why India is the new hotspot for renewable energy investors. 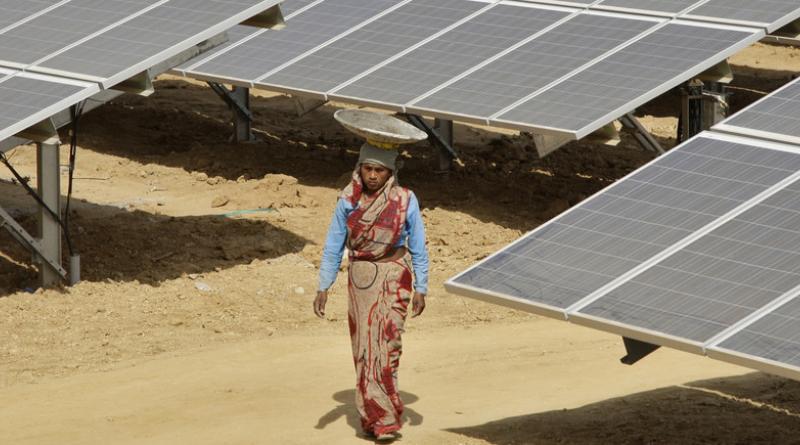 As the world comes to terms with the enormity of the threat posed by climate change, India’s emergence as home to one of the world’s largest clean-energy expansion programmes is like a whiff of fresh air.

On the back of a highly conducive policy environment, a steady influx of capital, falling prices and new technologies, India has seen an exponential growth in its renewable energy (RE) sector in the past five years. In 2015, the government made its intentions to transition to a lower-emission electricity system clear by declaring an ambitious target of 175 GW from renewables by 2022. The message was simple; wider and cheaper energy access but at minimal cost to the environment.

The renewables industry responded to the government’s call for climate-compatible growth by aggressively ramping up capacity, at an annual growth rate of 17.5% between 2014 and 2019 and increasing the share of renewables in India's total energy mix from 6% to 10%. Today, with an installed renewables capacity of 83 GW, plus 31 GW under development and a further 35 GW out for tender, India is among the top-five clean-energy producers globally and is well on course to surpass its original target. In fact, it is now eyeing 225 GW from renewables by 2022 and a target of 40% clean energy by 2030.

Not surprisingly, this growth has coincided with a sharp increase in investment in the sector from both domestic and foreign sources. The sector has seen more than $42 billion of investment since 2014 and around $7 billion of foreign direct investment (FDI) between April 2000 and June 2018. In 2017-18, total FDI in the sector surpassed $1 billion for the first time, while in 2018-19, it grew more than 20% to $1.4 billlion. Multilateral and bilateral agencies, as well as sovereign wealth funds, have pumped significant FDI into the Indian green energy space, spread across solar and wind power generation firms, electric vehicles and storage projects. India looks set to remain an attractive destination for investors in clean energy, with the government setting ambitious targets and pursuing several reforms to boost investor confidence.

For a country that is home to one-sixth of the world’s population, India’s per-capita consumption of electricity is meagre. India currently has an installed electricity capacity of 365 GW, implying a per-capita consumption of roughly 1/4th that of China and 1/13th that of the US. As India sees rapid economic growth and transforms into an industrial hub, demand for energy will spiral upwards. Growing urbanization, rising incomes and a steadily increasing population will also spur consumer demand for electricity. Studies suggest that India’s share of total global primary energy demand is set to roughly double to around 11% by 2040. India will need to double its electricity output by 2030 to meet this massive rise in demand, while also honouring its commitment to reduce its carbon footprint by 35% from 2005 levels. This would require roughly half the additional output to come from renewables, which translates to adding 25 GW of renewable capacity annually until 2030. An expansion of this magnitude will require funding of around $76 billion to 2022, growing to $250 billion during 2023-30, as per India’s Economic Survey 2018-19. Therefore, on an annualized basis, investment opportunities of over $30 billion are expected to emerge in the next decade and beyond, about three times current levels - clearly indicating a huge and untapped investment potential.

The government has also taken several steps to induce foreign investment in this sector. It has signalled its commitment to promoting green energy by declaring an aggressive target of 450 GW of green energy capacity by 2030. It has backed this up by strengthening macroeconomic fundamentals, ensuring policy stability and introducing several fiscal incentives. Consequently, India has steadily improved its position in the World Bank’s Ease of Doing Business rankings and the WEF’s Global Competitiveness Index, and is currently ranked third in the EY RE Country Attractiveness Index. India allows 100% FDI for RE projects to facilitate easy transfer of capital and technology. The new government, in its first post-election budget, has also announced several welcome measures such as tax breaks for setting up mega-manufacturing plants for solar cells, lithium storage batteries, electric vehicles and charging infrastructure. It is also focusing on strengthening the grid to enable seamless and increased integration of renewables. The fact that India’s renewable market is huge and well-diversified in terms of the location of its projects has also helped lower investors' risk perception.

In further good news for investors, the Indian RE industry has matured and is now characterised by its large size, lower risks, predictable yields and medium to high returns, which is exactly what foreign institutional investors (FII) seek. It currently offers higher risk-adjusted excess returns than markets of comparable size, such as the US or China. Overall, this makes the Indian RE sector an attractive proposition for FIIs, especially when faced with dipping returns in their home markets. RE is also more attractive than other infrastructure sub-sectors, particularly fossil fuel power generation, in terms of cash flow variability and profit margins, thanks in part to rising capital costs for fossil fuel plants.

All the above factors have paved the way for several global funds who have either entered the sector or are in advanced stages of discussion regarding investing. The list includes Singapore based GIC Holdings, Abu Dhabi Investment Authority, SoftBank, Brookfield, CPPIB and CPDQ from Canada, ORIX (Japan), Sembcorp and APG (Holland), among others, all of whom have decided to invest in the India renewables growth story. The private equity arms of Goldman Sachs, JP Morgan and Morgan Stanley have also entered the sector, reaped decent returns and continue to show faith in it.

But the government can still do more to counter potential dampeners - by, for example, improving transmission infrastructure, easing land-acquisition norms, ensuring no flip flops once contracts are concluded and revisiting aggressive tariff caps on reverse auctions that can severely dent investor margins. It must also work to turn around India's distribution companies (discoms) so that they can honour their renewable purchase obligations (RPO - promises to purchase a certain percentage of their electricity requirement from renewable energy producers) and pay investors on time. The government must also introduce a payment security mechanism to counter the risk that discoms do not fulfil their contractual obligations. A foreign-exchange hedging facility will also soothe investor worries around currency volatility. If these issues can be adequately and immediately addressed by policy-makers, it will further lower risks and boost investments.

The battle against climate change cannot be won without a healthy and vibrant renewables sector in India. This needs a steady flow of funds in the years ahead and the current sector profile is perfectly aligned to investor interests – thus raising hopes that India's renewables success story will continue unabated.

Blade recycling: a top priority for the wind industry.