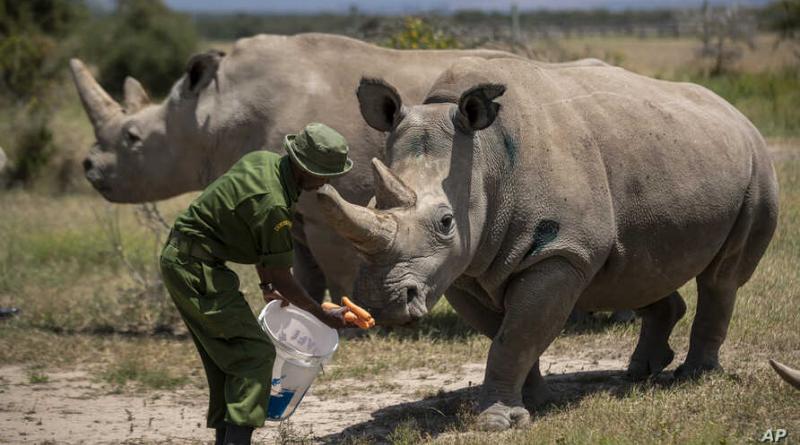 Scientists in Kenya have harvested 10 eggs from the last two remaining northern white rhinos in the race to keep the species from total extinction.

The two females – Najin and Fatuwill who are mother and daughter – live at the Ol Pejeta Conservancy.

Because neither one would be able to carry a pregnancy to full term, the scientists hope tocreate viable embryos and implant them into southern white rhinos.

Czech and German experts are leading the effort.

“If you want to start a population of the northern white rhino, one baby is not enough, you need as many babies as possible,” Jan Stejskal of the Czech Republic's Dvůr Králové Zoo says.

Conservationists are waiting for the onset of the reproductive cycle of the surrogates but say that is nearly impossible to tell when they are ready. The scientists plan to introduce a southern rhino bull to the females and watch if they go into heat.

The northern white rhino is the world’s most endangered mammal, with only two remaining females. The last male died in 2018.

The northern white rhino used to be relatively plentiful throughout east and central Africa but have been nearly wiped out because of poaching.

A picture that tells the man made climate induced extinction story.

London mayor wants daily driving charge of up to £2