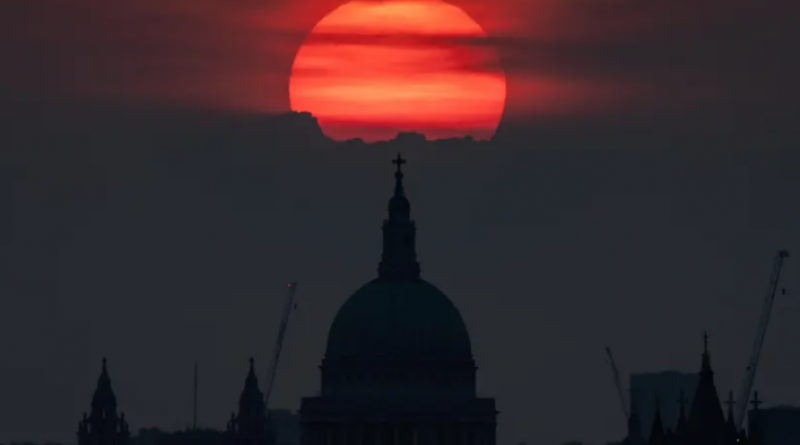 Season now has a health warning and people may lose associations of joy, relaxation and celebration

Beware summer! The season we used to anticipate as the lightest, brightest, balmiest time of the year now comes with a health warning.

For the first time in the UK, the Met Office issued an extreme heat advisory this week. The warning was very staid, very British, but a clear shift away from the ethos of Keep Calm and Carry On. The amber alert urged precautions against adverse health effects for vulnerable populations, pressure on water resources, potential power cuts and increased likelihood of transport delays. Given the temperatures were only a little over 30C for a few days, this might seem risible to people living in far hotter parts of the world, but it is part of a growing global conversation that is fundamentally challenging how we think about summer in a climate-disrupted world.

In the mid-latitudes of the northern hemisphere, where most of the human population lives, the months of June, July and August have until recently been seen a season of joy, relaxation and celebration. It is when people take their longest holiday of the year, when most weddings are arranged, when Olympics and World Cups are staged. Newspapers have long filled their midsummer front pages with seasonal images of children slurping ice-creams, holidaymakers at the beach and women in bikinis. There are fewer cases of depression linked to seasonally adjusted disorder. Radio DJs fill the airwaves with upbeat seasonal staples such as Summer Breeze, Sunny Afternoon and Walking on Sunshine.

But a jarring note has been struck in recent weeks by a wave of violent extreme weather that has smashed heat and rain records, killed hundreds and raised fears that summer may never seem the same again. Suddenly the full fury of the climate crisis appears almost everywhere at once.

Three weeks ago, it was the deadly heatwave in the north-west Americas that smashed Canada’s all-time temperature record by more than 5C and took at least 500 lives in British Columbia, and the US states of Oregon and Washington. Last week, it was the devastating deluges that turned streets into rivers and trapped people in cellars in Germany, Poland, the Netherlands, the Czech Republic and UK. In the past few days, it has been horrifying images of Chinese commuters starting to suffocate in Zhengzhou subway trains as flood waters pushed air out of the carriages. At least 33 people died in the city after a year’s worth of rain in four days.

Other heat records have been set in Turkey, Finland, Estonia and elsewhere, while savage forest fires in Siberia and North America continue to rage, filling the skies with toxic smoke and sending carbon plumes up into the atmosphere.

Climate scientists have long predicted extreme weather will become more intense and frequent as a result of exhaust fumes, industrial activity, deforestation and other human activities. Records of heat and rain are already being broken with increasing frequency across the world but they tend to be noticed most in the northern and southern summers. This is the time of year when global heating pushes temperate dwellers further from our comfort zone and into uncharted climate territory. Adapting will be a mental as well as physical challenge.

Britons and other northern peoples have been so historically starved of sunlight that we are notoriously inclined to overcompensate by baring all in the blazing summer sun. But temperatures are already hitting levels common nearer the equator and desert regions. There, locals have learned to be wary of the sun, stay indoors, cover their skin, walk in the shade and limit their activities to the cooler morning and evening.

Richard Betts, the head of climate impacts research at the Met Office Hadley Centre, said people in the UK may start to emulate Australians who describe hot, sunny weather as “awful” rather than “lovely”.

“I think the British view of summer may well change,” he said. “I would not be surprised if as a nation we started to shift our view of hot weather as we become more aware of its dangers. I do still enjoy hot sunny weather, but am no longer blase about it, and take precautions to protect myself and my family from the heat, and am exceptionally careful about wildfire risks.”

The seasons have already moved an alarming distance in the northern midlatitudes. A recent study found the duration of summer increased from 78 days to 95 days between 1952–2011. Without a rapid emissions phase out, this part of the world is on course have a six-month summer and only a two-month winter by the end of the century. Our seasonal temperature refuge is shrinking. In fairytale terms, an anti-Narnia trend is wiping out the Goldilocks zone.

A shift in seasons is also disturbing agricultural production and the rhythm of plants, insects, birds and other species that we depend on. It is drying out soils, changing moisture patterns in the air and worsening drought. This has a knock-on effect on humans.

In the US, the summer fire season is lengthening and deepening as temperatures rise, winter snow melts earlier, and soils and vegetation dry out. For every 1C rise in temperature, there is a 20% greater chance of a major wildfire, according to the UCLA Center of Climate Science. Alex Hall, the director of the centre, previously projected increases in wildfires of 64%-77% in southern California by midcentury, but he now suspects this an underestimate because fire has outpaced their forecasts.

“California and the western US are an outdoor paradise for many. But for the past couple of summers, we have been living in a nightmarish scenario of intense heat, wildfire, and polluted air,” Alex Hall, the director of the centre, said. “With this year seeming to bring yet another summer of intense fire, it’s starting to seem like the new normal. I believe this is beginning to change perceptions of the region and undermine the idea of ‘paradise.’”

The mental health effects of more extreme weather and relentless summers remain underreported. David Eisenman, a professor of community health sciences in California, has studied the likely impact of prolonged fire seasons on people who are be trapped indoors by smoke. “Weeks at a time, most people are resilient, but if it happens for a few months every summer, that’s a different story. And months of smoke are the new thing that we’re going to see,” he said. “Even assuming people are physically safe, fundamentally, it’s about social isolation. The joys that summer once brought become more difficult to access. It’s the experience of social isolation we felt from Covid-19 all over again.”

Reassurance could come in the form of upgraded infrastructure. This will have to be stronger and cooler. As well as higher flood defences, hospitals and care homes will need more air conditioning; cities will need more parks, rivers and shade; roads will have to be designed not to melt and crack in the heat. Betts said buildings and public spaces should not be designed on the basis of past weather data because that is no longer a guide. “As weather more frequently goes outside past experience, it is going beyond what the infrastructure can cope with – so it’s more of a threshold in the human system than the climate system. We urgently need to catch up on adaptation, we are lagging well behind the changes in climate that are now occurring.”

Summers could last for half the year by 2100.